Putting a New Spin on Computing

*Physicists at the UA have achieved a breakthrough toward the development of a new breed of computing devices that can process data using less power.

In a recent publication in Physical Review Letters, physicists at the University of Arizona propose a way to translate the elusive magnetic spin of electrons into easily measurable electric signals. The finding is a key step in the development of computing based on spintronics, which doesn’t rely on electron charge to digitize information.

Unlike conventional computing devices, which require electric charges to flow along a circuit, spintronics harnesses the magnetic properties of electrons rather than their electric charge to process and store information.

“Spintronics has the potential to overcome several shortcomings of conventional, charge-based computing. Microprocessors store information only as long as they are powered up, which is the reason computers take time to boot up and lose any data in their working memory if there is a loss of power,” said Philippe Jacquod, an associate professor with joint appointments in the College of Optical Sciences and the department of physics at the College of Science, who published the research together with his postdoctoral assistant, Peter Stano.

Just like a magnet with a north and a south pole (left), electrons are surrounded by a magnetic field (right). This magnetic momentum, or spin, could be used to store information in more efficient ways. (Illustration: Philippe Jacquod)

“In addition, charge-based microprocessors are leaky, meaning they have to run an electric current all the time just to keep the data in their working memory at their right value,” Jacquod added. “That’s one reason why laptops get hot while they’re working.”

“Spintronics avoids this because it treats the electrons as tiny magnets that retain the information they store even when the device is powered down. That might save a lot of energy.”

To understand the concept of spintronics, it helps to picture each electron as a tiny magnet, Jacquod explained.

“Every electron has a certain mass, a certain charge and a certain magnetic moment, or as we physicists call it, a spin,” he said. “The electron is not physically spinning around, but it has a magnetic north pole and a magnetic south pole. Its spin depends on which pole is pointing up.” 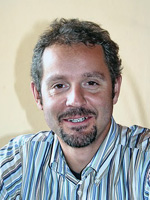 Current microprocessors digitize information into bits, or “zeroes” and “ones,” determined by the absence or presence of electric charges. “Zero” means very few electronic charges are present; “one” means there are many of them. In spintronics, only the orientation of an electron’s magnetic spin determines whether it counts as a zero or a one.

“You want as many magnetic units as possible, but you also want to be able to manipulate them to generate, transfer and exchange information, while making them as small as possible” Jacquod said.

Taking advantage of the magnetic moment of electrons for information processing requires converting their magnetic spin into an electric signal. This is commonly achieved using contacts consisting of common iron magnets or with large magnetic fields. However, iron magnets are too crude to work at the nanoscale of tomorrow’s microprocessors, while large magnetic fields disturb the very currents they are supposed to measure.

“Controlling the spin of the electrons is very difficult because it responds very weakly to external magnetic fields,” Jacquod explained. “In addition, it is very hard to localize magnetic fields. Both make it hard to miniaturize this technology.”

“It would be much better if you could read out the spin by making an electric measurement instead of a magnetic measurement, because miniaturized electric circuits are already widely available,” he added.

In their research paper, based on theoretical calculations controlled by numerical simulations, Jacquod and Stano propose a protocol using existing technology and requiring only small magnetic fields to measure the spin of electrons.

“We take advantage of a nanoscale structure known as a quantum point contact, which one can think of as the ultimate bottleneck for electrons,” Jacquod explained. “As the electrons are flowing through the circuit, their motion through that bottleneck is constrained by quantum mechanics. Placing a small magnetic field around that constriction allows us to measure the spin of the electrons.”

“Our experience tells us that our protocol has a very good chance to work in practice because we have done similar calculations of other phenomena,” Jacquod said. “That gives us the confidence in the reliability of these results.”

In addition to being able to detect and manipulate the magnetic spin of the electrons, the work is a step forward in terms of quantifying it.

“We can measure the average spin of a flow of electrons passing through the bottleneck,” Jacquod explained. “The electrons have different spins, but if there is an excess in one direction, for example ten percent more electrons with an upward spin, we can measure that rather precisely.”

He said that up until now, researchers could only determine there was excess, but were not able to quantify it.

“Once you know how to produce the excess spin and know how to measure it, you could start thinking about doing basic computing tasks,” he said, adding that in order to transform this work into applications, some distance has yet to be covered.

“We are hopeful that a fundamental stumbling block will very soon be removed from the spintronics roadmap,” Stano added.

Spintronics could be a stepping stone for quantum computing, in which an electron not only encodes zero or one, but many intermediate states simultaneously. To achieve this, however, this research should be extended to deal with electrons one-by-one, a feat that has yet to be accomplished.