Russian President Vladimir Putin on Friday, December 28th, signed the law, which had been passed in response to the USA’s “Magnitsky Act”. The law has been dubbed in Russia as the “Law of Dima Yakovlev” (named after the boy, who died in a hot car in the U.S.). 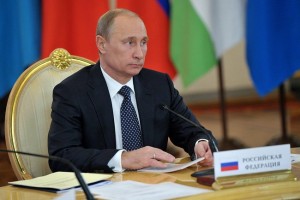 Photo by: The Presidential Press and Information Office

The section of the law providing for a ban on adoptions of Russian children by American citizens has become an object of heated debate between Russia and the U.S. In addition, the law provides for the suspension of “political” NGOs receiving funds from U.S. citizens. To crown it all, the citizens of the Russian Federation, who also hold U.S. citizenship, are forbidden to lead nonprofit organizations.

According to the press service of the Kremlin, the President also signed a decree “On measures for the implementation of the state policy in the sphere of protection of orphans and children left without parental care.”