Researchers at Brown University and Hasbro Children’s Hospital have traced the molecular interactions that allow the protein survivin to escape the nucleus of a breast cancer cell and prolong the cell’s life. The study may help in the development of better therapies and prognostics.

PROVIDENCE, R.I. [Brown University] — If the fight against breast cancer were a criminal investigation, then the proteins survivin, HDAC6, CBP, and CRM1 would be among the shadier figures. In that vein, a study to be published in the March 30 Journal of Biological Chemistry is the police report that reveals a key moment for keeping cancer cells alive: survivin’s jailbreak from the nucleus, aided and abetted by the other proteins. The research highlights that a protein’s location in a cell affects its impact on disease, and offers clear new leads for the investigation.

All four proteins were already under suspicion. Researchers, for example, have already tried to assess what levels of HDAC6 in patients with estrogen-receptor positive breast cancer may mean for their prognosis. The results have been inconclusive. The new research suggests that measuring overall levels may not be enough, said the study’s senior author Dr. Rachel Altura, associate professor of pediatrics in The Warren Alpert Medical School of Brown University and a pediatric oncologist at Hasbro Children’s Hospital.

“We need to look not only at the levels, but also where is it in the cell,” she said. 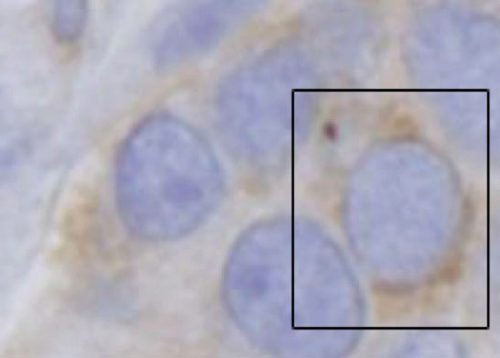 Best kept behind bars. Inside the nucleus, survivin behaves. If it escapes, it can give a cancer cell great longevity. Three proteins conspire to help survivin break out of the nucleus. The darker area around the nucleus, above, is HDAC6, one of the conspirators. Image credit: Altura lab/Brown University

Altura’s emphasis on location comes from what her research team found as they tracked and tweaked the comings and goings of survivin in cells. Inside the nucleus, survivin is no problem. Outside the nucleus, but within the cell, it can prevent normal cell death, allowing cancer cells to persist.

In previous work, Altura and her collaborators established that under normal circumstances, CBP chemically regulates survivin, a process called acetylation, and keeps it in the nucleus. The question in the new work was how survivin gets out.

In a series of experiments, what they observed was that in human and mouse breast cancer cells, HDAC6 gathers at the boundary between the nucleus and the rest of the cell, becomes activated by CBP, then binds survivin and undoes its acetylation. This deacetylation allows survivin to then be shuttled out of the nucleus by CRM1.

In the classic jailbreak, CBP is a corrupt guard who looks the other way as HDAC6, the shovel, is smuggled in. The final accomplice, CRM1, is the tunnel with a getaway car on the other end.

Altura said the research suggests a clear strategy — to keep survivin in the nucleus — and two leads to pursue it, both of which she has already begun working on with collaborators in academia and in the pharmaceutical industry. 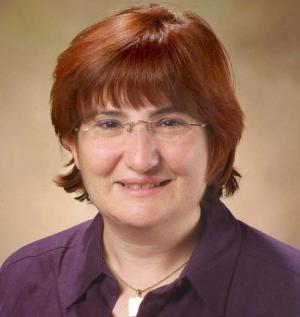 Dr. Rachel Altura. It’s not just how much HDAC6 is present — what’s important is where it is. Image credit: Brown University

One idea is to inhibit HDAC6 in an attempt to prevent it from misregulating the acetylation of survivin. While general HDAC inhibitors are in clinical trials, Altura is optimistic that blocking just HDAC6, using specific inhibitors developed by a colleague in Japan, would have fewer complications.

“You always have to worry about all the things you don’t know that you are targeting,” she said. “If we can target HDAC6, we can maybe block survivin from coming out of the nucleus and maintain it in its good state.”

The other strategy is to block CRM1, Altura said, an idea she is pursuing with a pharmaceutical company in breast cancer cells in the lab. She said preliminary experiments look promising in keeping survivin inside the nucleus and making cancer cells more susceptible to dying.

The National Institutes of Health’s Center for Research Resources funded the study.