“I’m here to help them achieve their goals, and if they are motivated, that is very easy,” says Elimelech, the Roberto Goizueta Professor of Chemical and Environmental Engineering. “All I have to do is give them freedom to pursue their scientific passions, inspire them, take interest in their work and in their lives beyond the lab, and treat them as individuals — not as people whose sole function is to produce scientific data.

Elimelech is this year’s recipient of the Yale Postdoctoral Mentoring Prize, which is given to the faculty member who is judged to have had the greatest positive impact on his or her postdoctoral appointee(s). Faculty members are nominated by postdoctoral scholars for the prestigious honor, and a committee appointed by Provost Peter Salovey selects the prizewinner from these nominees. The prize — which includes a cash award and a plaque — was established two years ago to promote the importance of mentoring to the career development of postdocs and to encourage faculty in their role as mentors. 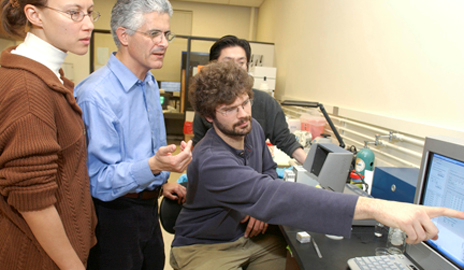 Menachem Elimelech with young researchers in his laboratory, who concur that their mentor creates a happy, creative and productive lab environment. Image credit: Yale University

In his nomination letter, postdoctoral fellow Saifur Rahaman noted that he chose to come to Yale specially for the opportunity to train with Elimelech, whose research on physiochemical and biophysical processes in engineered and natural environmental systems focuses on the development of better and more energy-efficient methods to control water quality. Specifically, Elimelech and his laboratory team explore membrane separation processes for desalination and wastewater reuse; the transport and fate of microbial pathogens in aquatic systems; environmental implications and applications of nanomaterials in water purification processes; and water and sanitation in developing countries, among other activities.

“Every week, Dr. Elimelech conducts three-hour meetings with his whole group to discuss research ideas, progress, and future directions, and to troubleshoot experiments,” wrote Rahaman in his nomination letter. “These meetings are a safe and supportive atmosphere in which students and postdocs can share their knowledge and, very often, I have learned new techniques and concepts that have improved my research.

“Additionally, Dr. Elimelech holds individual meetings with his postdocs to guide us in designing our research and evaluate our progress,” Rahaman continues. “But he also uses these meetings to impart the non-research-related skills that are critical to success in the academic world. Together, we have worked on writing scientific articles and competitive grant proposals, improving my presentation skills, and shaping my research and teaching statements. Dr. Elimelech even goes so far as to arrange mock interviews for us before we go on faculty job interviews. Such practices have given me the confidence that I can excel in meeting the diverse demands required of the academic researcher I aspire to be.”

Rahaman also touted Elimelech for maintaining a “family-friendly” lab environment “that acknowledges and accommodates the challenges of balancing family and career”; providing flexibility in working hours while the postdoctoral fellow dealt with personal issues (and for sharing his concern about Rahaman’s personal life); and for helping him to think critically about solving engineering problems while understanding how his own research “fits into the larger picture.” Elimelech’s lab, Rahaman added, is “an exciting and creative place to work.” 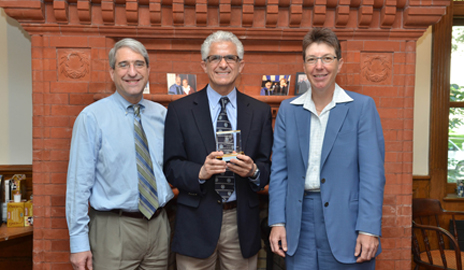 Elimelech, who studied in his native Israel before earning his Ph.D. at The Johns Hopkins University, says that he models his own mentoring, in part, on that of an adviser he had as a doctoral student.

“My adviser gave me a lot of freedom and did not dictate my direction,” says Elimelech, who won the Yale University Graduate Mentor Award in 2004. “My approach is the same: I think that if students have a real passion for science, they’ll come up with their own ideas. I also tailor my advising individually to each student. I don’t believe in ‘one size fits all.’”

The Yale faculty member says he especially encourages those he advises to publish early in their research careers and to network — via scientific conferences and other venues — with others in the scientific community, both at Yale and beyond. Eighteen of the 20 postdocs he has advised currently hold academic positions at major research universities.

“At Yale, I’m lucky because we get such outstanding scholars,” says Elimelech. “But I always tell them: ‘You need to be able to tell the story — explain what your research is about — in much the same way a movie tells a story. Being able to interpret what you do for others is critical. You can find many smart people who have a hard time telling the story. So we practice presentations before a group, where the audience can give feedback, and practice interviews for faculty positions. I help them develop proper writing and oral communications skills, and it’s always nice to see the progress they make from the time when they come to when they leave.”

Eleven of the Yale faculty member’s former mentees also contributed praise-filled commentary on Elimelech’s mentoring in Rahaman’s nomination letter for the Postdoctoral Mentoring Prize. Now faculty members themselves at universities around the world, they lauded their former adviser for — among other attributes — his “enthusiastic encouragement,” for “supporting his students/postdocs in difficult moments of their lives and celebrating with them their personal achievements,” for his “open-mindedness,” and for being a role model on how to run “a productive and happy research group.”

Elimelech says he is humbled by such sentiments, but he acknowledges that caring about the happiness of those he advises is of paramount importance to him. The smallest of gestures — such as the treat of sharing bagels at research group meetings on Fridays — can make a difference, says the Yale faculty member, who likewise believes that allowing for down time is as important as promoting the serious research in his laboratory.

“A happy person is oftentimes a better and more creative researcher,” says Elimelech. “One of the things I’ve found is that the students and researchers in my group are really well-rounded individuals, and I emphasize perspective and balance. They can’t just be in the laboratory seven days a week. I also want them to have a life outside my lab.”

Sometimes, he says, his job as a mentor also means being an encouraging presence when things don’t go the way his postdocs had hoped.

“Failures and rejections are part of life as a scientist or an academic — especially for anyone who writes proposals! — and I remind them of that,” says Elimelech. “I also share with them some of my own successes and failures, and we joke about them. I want them to learn how to take everything in stride.”

Elimelech takes special satisfaction hearing from those he has mentored long after they have left Yale, and he often receives emails and phone calls updating him not only on his former mentees’ scientific and academic achievements but also on their personal lives.

“I see all of them doing very well, and it is always wonderful to hear from them,” says Elimelech. “It’s one of the reasons that I enjoy mentoring as much as I do classroom teaching. An adviser is for life.”