Printing the Metals of the Future

3-D printers can create all kinds of things, from eyeglasses to implantable medical devices, straight from a computer model and without the need for molds. But for making spacecraft, engineers sometimes need custom parts that traditional manufacturing techniques and standard 3-D printers can’t create, because they need to have the properties of multiple metals. Now, researchers at NASA’s Jet Propulsion Laboratory in Pasadena, California, are implementing a printing process that transitions from one metal or alloy to another in a single object.

“You can have a continuous transition from alloy to alloy to alloy, and you can study a wide range of potential alloys,” said R. Peter Dillon, a technologist at JPL. “We think it’s going to change materials research in the future.”

Although gradient alloys have been created in the past in research and development settings, this is the first time these composite materials have been used in making objects, such as a mount for a mirror, said John Paul Borgonia, a JPL mechanical engineer.

Why would you need to make a machine part like this? Say you want a metal object where you would like the ends to have different properties. One side could have a high melting temperature and the other a low density, or one side could be magnetic and the other not. Of course, you could separately make both halves of the object from their respective metals and then weld them together. But the weld itself may be brittle, so that your new object might fall apart under stress. That’s not a good idea if you are constructing an interplanetary spacecraft, for example, which cannot be fixed once it is deployed. 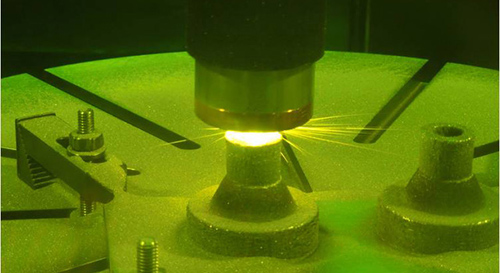 JPL scientists have been developing a technique to address this problem since 2010. An effort to improve the methods of combining parts made of different materials in NASA’s Mars Science Laboratory mission, which safely landed the Curiosity rover on the Red Planet in 2012, inspired a project to 3-D print components with multiple alloy compositions.

Researchers from JPL, the California Institute of Technology, Pasadena, and Pennsylvania State University, University Park, joined forces to tackle the issue. The result has implications for space travel and machinery on our own planet.

“We’re taking a standard 3-D printing process and combining the ability to change the metal powder that the part is being built with on the fly,” said Douglas Hofmann, a researcher in material science and metallurgy at JPL, and visiting associate at Caltech. “You can constantly be changing the composition of the material.”

In their new technique, Hofmann and his colleagues deposit layers of metal on a rotating rod, thus transitioning metals from the inside out, rather than adding layers from bottom to top, as in the more traditional 3-D printing technique. A laser melts metal powder to create the layers.

Future space missions may incorporate parts made with this technique. The auto industry and the commercial aerospace industry may also find it useful, Hofmann said.

A report on this work was published in Scientific Reports on June 19. Coauthors include Douglas Hofmann; Scott Roberts, Joanna Kolodziejska and Andrew A. Shapiro from Caltech and JPL; R. Peter Dillon, Jong-ook Suh, and John-Paul Borgonia from JPL; and Richard Otis and Zi-Kui Liu from Pennsylvania State University. The work was funded by NASA. Caltech manages JPL for NASA.