President Vladimir Putin met with pilot cosmonaut Valentina Tereshkova. The President in person congratulated her on the remarkable date – the 55th anniversary of her single-person flight around the Earth aboard the Vostok-6 spaceship, which began on June 16, 1963, and lasted almost three days. 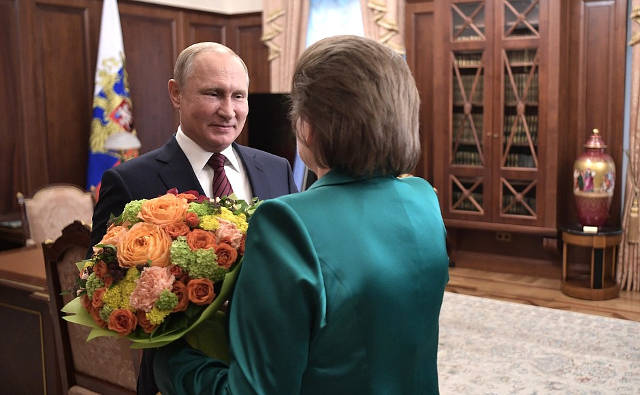 President of Russia Vladimir Putin: Ms Tereshkova, please accept my sincere congratulations on this anniversary – 55 years of your space flight.

Valentina Tereshkova: Thank you very much. It is unbelievable how much time has elapsed!

Vladimir Putin: I would like to say in this regard that you are not only the world’s first female cosmonaut, I think you remain the only female cosmonaut and astronaut who has made a solo flight: all the other women were crewmembers.

Valentina Tereshkova: Could I also be a crewmember so as to explore all the possibilities?

Vladimir Putin: Would you like to make another flight? (Laughter).

Valentina Tereshkova: We were at the cosmodrome, Mr President, to see a crew off.

Vladimir Putin: I saw it.

Vladimir Putin: Ms Tereshkova, we all know you and love you very much. But not everyone is aware that your flight did not go all that smoothly. As far as I know, there were failures in the control system, and you had to orient the spaceship manually, didn’t you?

Valentina Tereshkova: There was a failure. I think it was caused by a mistake. The braking engine was programmed to raise the orbit, not to descend, not to push the spaceship down. I noticed it during the first rounds around the planet and reported to Earth.

Sergei Korolev [Chief Designer of the USSR space industry] had Yevgeny Shabarov [Deputy Chief Designer] deal with that, Mr Korolev sent him off from the cosmodrome on foot.

No, he was a very smart, good engineer. I made some adjustments, put in the data the control centre gave me. I put in the data and everything was in order. I reported it, and the rest of the flight went fine. So, Mr President, when we showed you the film The Spacewalker – of course, no flight went without setbacks, there were always some problems. 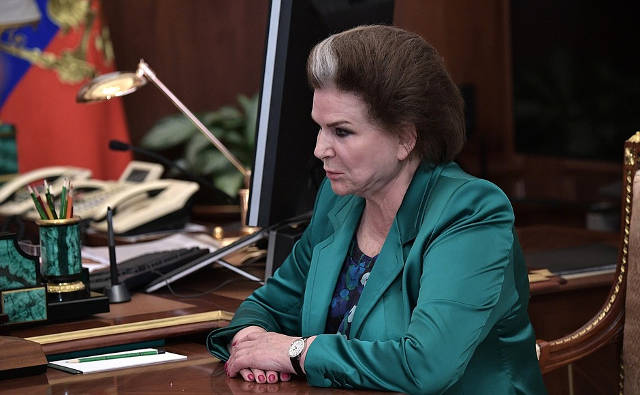 Vladimir Putin: The flight went fine but the landing was also not easy.

Valentina Tereshkova: The landing… It was Altai Territory and the dried shore of Lake Kulundinskoye. The wind was strong, so it really hit hard.

Mr President, I am sorry, you have been tortured with questions. Meanwhile, in one of our conversations, we raised this issue and I know that you have signed an important document.

I would like to bring up the Volga again – it has algal bloom. And this is a great Russian river, I so badly want it to remain the Mother Volga, the river that nourishes us. It is painful to look at it during algal bloom.

Can I ask you to take it under your control? Because if you do not, it can take a long time.

Vladimir Putin: We now have a programme on the Volga River, so we will pursue it.

Valentina Tereshkova: Dmitry Medvedev said the funds had been allocated but they are in custody of Anton Siluanov [First Deputy Prime Minister – Finance Minister].

Vladimir Putin: No, they have been allocated by the Government. It does not matter where the funds are, they are available and are earmarked for these purposes. We have a programme, and we will be pursuing it.

Valentina Tereshkova: We also have problems at the Mendeleyev oil refinery. It is upstream of the town of Tutayev. It produces top aircraft oils. We have a lot of nature but we are rather careless about it.

It has already reached the Volga, but so far, it is not in the water but in the soil. They are now puncturing the soil to see the depth to which those green oils are deposited. It is certainly a great threat to the Volga; this is why we raise this question.

Vladimir Putin: I will look into it, Ms Tereshkova.

And may I also ask you to take care of yourself? We all worry about you. How can we, people from Yaroslavl, help you?

Vladimir Putin: You are already doing it – the Governor is doing a great job.

Valentina Tereshkova: Thank you for the Governor, we are pleased with him. People like him, and of course, much has been done.

Vladimir Putin: He is an honourable and hard-working person, and a talented one to a degree.

Valentina Tereshkova: Can we keep him for a while?

Vladimir Putin: He started just recently, so let him work.