During surgery, anesthesiologists monitor and manage patients to make sure they are safe and breathing well. But these doctors can’t always predict when complications will arise.

Now researchers at the University of Washington have developed a new machine-learning system, called Prescience, which uses input from patient charts and standard operating room sensors to predict the likelihood that a patient will develop hypoxemia — a condition when blood oxygen levels dip slightly below normal. Hypoxemia can lead to serious consequences, such as infections and abnormal heart behavior.

Prescience also provides real-world explanations behind its predictions. With this information, anesthesiologists can better understand why a patient is at risk for hypoxemia and prevent it before it happens. The team, which published its findings Oct. 10 in Nature Biomedical Engineering, estimates that Prescience could improve the ability of anesthesiologists to anticipate and prevent 2.4 million more hypoxemia cases in the United States every year.

“Modern machine-learning methods often just spit out a prediction result. They don’t explain to you what patient features contributed to that prediction,” said Su-In Lee, an associate professor in the UW’s Paul G. Allen School of Computer Science & Engineering and senior author of the paper. “Our new method opens this black box and actually enables us to understand why two different patients might develop hypoxemia. That’s the power.” 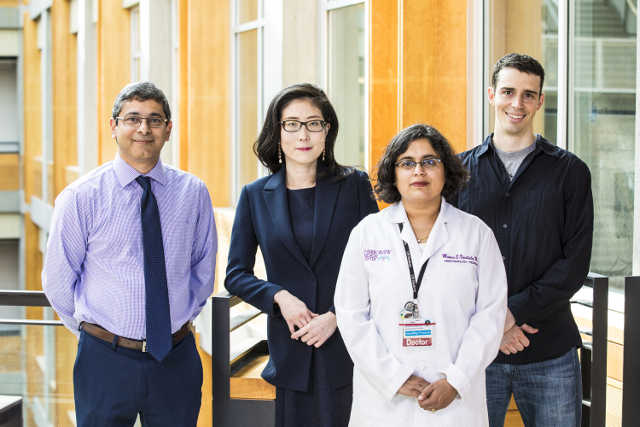 Lee and Scott Lundberg, a doctoral student in the Allen School, started the project by meeting with collaborators from UW Medicine to find out what they needed in the operating room.

“One of the things the anesthesiologists said was: ‘We are not really satisfied with just a prediction. We want to know why,’” Lee said. “So that got us thinking.”

Lee and Lundberg set out to create a machine-learning system that could both make predictions and explain them. First, they acquired a dataset of 50,000 real surgeries from University of Washington Medical Center and Harborview Medical Center in Seattle. These data include patient intake information like age and weight as well as real-time, minute-by-minute information — heart rate, blood oxygen levels and more — throughout the surgeries. The scientists used all of these data to teach Prescience to make predictions.

The team wanted Prescience to solve two different kinds of problems. Prescience needed to look at pre-surgery information and predict whether any given patient would have hypoxemia while under anesthesia. Prescience also had to predict hypoxemia at any point throughout surgery by looking at real-time information. Finally, Lee and Lundberg developed a new approach to train Prescience to generate understandable explanations behind its predictions.

With this information in mind, it was time to put Prescience to the test.

Lee and Lundberg created a web interface that ran anesthesiologists through pre-surgery and real-time cases from surgeries in the dataset that were not used to train Prescience. For the real-time test, the researchers specifically chose cases that would be hard to predict, such as when a patient’s blood oxygen level is stable for 10 minutes and then drops.

“We wanted to know if this was going to be informative to anesthesiologists,” said Lundberg, who is the first author on the paper. “So for some of their cases, they got a bar of additional information from Prescience.”

Prescience improved the doctors’ ability to correctly predict a patient’s hypoxemia risk by 16 percent before a surgery and by 12 percent in real time during a surgery. Overall, with the help of Prescience, the anesthesiologists were able to correctly distinguish between the two scenarios nearly 80 percent of the time both before and during surgery.

“This research will allow us to better anticipate complications and target our treatment to each patient,” said co-author Dr. Monica Vavilala, professor of anesthesiology and pain medicine at the UW School of Medicine and director of the Harborview Injury Prevention & Research Center. “If we know there’s one aspect that’s causing the problem, then we can approach that first and more quickly. This could really change the way we practice, so this is a really big deal.”

Prescience isn’t quite ready to be in operating rooms yet. Lee and Lundberg plan to continue working with anesthesiologists to improve Prescience and give it an interface that’s both intuitive and useful. In addition, the team hopes that later versions of Prescience will be able to predict other harmful conditions, such as low blood pressure, and recommend treatment plans.

Regardless of Prescience’s future, one point is clear: This technology is meant to help anesthesiologists take better care of their patients, Lundberg said.

“Prescience doesn’t treat anyone,” he said. “Instead it tells you why it’s concerned, which then enables the doctor to make better treatment decisions.”