Last year was the hottest since records began being kept in 1880. Sixteen of the hottest years on record have occurred since 1998.

While the news about climate change is increasingly frightening, there are some reasons for optimism, said Patrick Kinney, Sc.D., in a guest lecture Friday (February 12) at the Yale School of Public Health. Foremost is the coalescence of the global community around the 2015 Paris Agreement calling for specific actions to combat climate change, as well the White House’s recognition that public health impacts of climate change should be part of the climate change message. 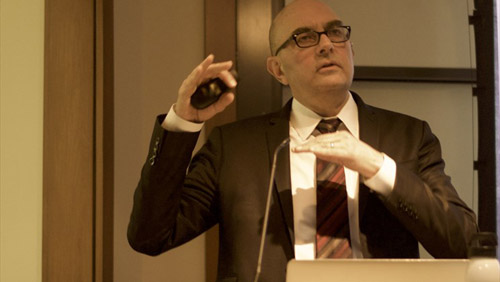 Public health workers have a distinct role to play in formulating policy on climate change, he said. They need to identify and prioritize cost efficient means of adapting to climate change, quantify the additional health benefits gained through mitigation measures and study the epidemiology of climate change in relation to human health.

“This is a huge field,” said Kinney.

Kinney, director of the Columbia Climate and Health Program and professor of Environmental Health Sciences at the Columbia University Mailman School of Public Health, has conducted numerous studies on the health effects of air pollution, including how ozone and particulate matter affect lung health and daily mortality in large cities.

His research has shown that excess mortality due to heat is observed from April to October with peaks in May and September. Heat had a larger impact on mortality early in the 20th century, Kinney noted, suggesting that the United States has adapted with the widespread use of air conditioning and generally improved health status.

Kinney’s work on air quality and environmental justice in Manhattan and the Bronx led to important insights into the impacts of diesel vehicle emissions on local air quality. He was the first to show that climate change could worsen urban smog, with attendant adverse health outcomes. In a new initiative, Kinney is seeking to understand how climate may affect pollen-related allergic airway diseases.

“Dr. Kinney has been ahead of the curve in studying climate change and health, including research on ozone- and heat-related mortality, asthma, cook stoves, landscape fires and aviation emissions,” said Robert Dubrow, professor and director of the Yale Climate Change and Health Initiative (CCHI) at the Yale School of Public Health.

The CCHI is one of the first programs of its type in the United States and is designed to train the next generation of scientists to address the health challenges posed by changing weather patterns. Led by Dubrow and Martin Klein, deputy dean for development, CCHI brings together multidisciplinary expertise from throughout the university to offer training workshops for students, internship funding and doctoral training positions. In addition, CCHI is developing curriculum in climate change and health for the Master in Public Health program and sponsoring pilot research grants for faculty.