It can be easy to miss what’s right in front of you, said Michael Jensen as he shared an awareness test video of basketball players and a “hidden” moonwalking bear in the opening of the 23rd annual Hutchinson Lecture last week at the University of Delaware.

“In effect, integrity is the unforeseen bear in our lives and my intention is to shift the parts of our world group, our frames of reference, relevant to our view of integrity so that we see it differently, in fact as it is, or much closer to what it is,” said Jensen, who presented “The Hidden Power of Integrity and Access to Vast Increases in Performance.”

Sponsored by UD’s Department of Economics, Department of Finance and Alfred Lerner College of Business and Economics, the Hutchinson Lecture addresses a topic of current interest in banking and/or finance.

Jensen, who is Jesse Isidor Straus Professor Emeritus of Business Administration at Harvard University, discussed how integrity is a key factor in productivity and performance that has gone largely unaddressed by the business world primarily because its impact is hidden in what he calls “the veil of invisibility.”

“A large amount of damage inflicted on people and organizations is caused by the actions of individuals who act only in their own self interest rather than putting the good of others or the organization first,” Jensen said.

According to Jensen, violations in integrity can have significant negative impacts on the wellbeing of corporations and individuals alike. He said integrity is a critical part for any entity to have maximum workability and therefore, the maximum opportunity for performance. He said this applies for objects as well as people and companies. 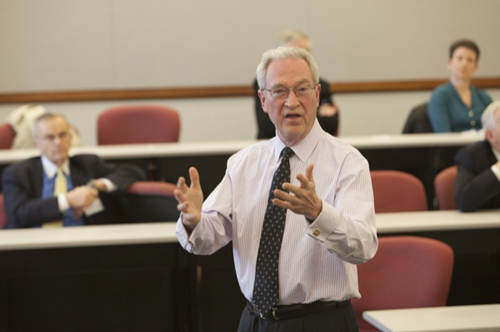 Michael Jensen, financial economics expert, discussed integrity issues and resultant effects on individuals and corporations at the annual Hutchinson Lecture at the University of Delaware. Photo by Ambre Alexander

Jensen said that in order to avoid such damage, or invisible integrity issues, individuals must take into account how their actions affect others in their professional lives.

“I have struggled with this for at least a decade but by shifting the way I view the world my own behavior has shifted with it and primarily for the better,” said Jensen. “My goal is for every person who attends this lecture to more clearly see how integrity affects his or her life. I believe this altered view can improve each of your lives and allow you to see opportunities in front of you more clearly.”

Jensen offered a new model of integrity aimed at providing powerful and actionable access to increased performance for individuals, families, groups and organizations. The key, he said, is for individuals to be completely honest about their intentions to those around them regarding everything from deadlines at work to expectations in relationships.

Although this can be easier said than done, Jensen said maintaining openness and honesty is always the best option and, in the workplace, where coworkers and supervisors need to be on the same page, productivity and efficiency will increase as a result.

“Without integrity, nothing works,” said Jensen. “Now that’s not literally true, but if you think about it as a heuristic and run your life on that basis, your life will change dramatically.”

Jensen joined the faculty of the Harvard Business School in 1985 and founded what is now the Negotiations, Organizations and Markets Unit in the school. He earned his doctorate in economics, finance and accounting and his MBA in finance from the University of Chicago, as well as a bachelor’s degree from Macalester College.

Jensen is the author of more than 100 scientific papers, in addition to numerous articles, comments and editorials published in the popular media on a wide range of economic, finance and business-related topics.

In 1973, Jensen co-founded (with Eugene Fama and Robert Merton) the Journal of Financial Economics, one of the top three scientific journals in financial economics, and served as managing editor from 1987 through 1997, when he became founding editor. In 1990, he was named Distinguished Scholar of the Year by the Eastern Finance Association and one of the Year’s 25 Most Fascinating Business People by Fortune magazine.

Over the last decade, Jensen has been a member of the Barbados Group, a worldwide group of a dozen scholars, including philosophers, economists, psychologists, technologists and educators to develop the ontological foundations of performance. He has served as consultant and board member to various corporations, foundations and governmental agencies and has given expert testimony before congressional and state committees and state and federal courts.

His major research interests now include “The Ontological Laws of Human Nature,” “A Positive Theory of the Normative Virtues,” “Being A Leader and the Effective Exercise of Leadership: An Ontological Approach,” and “The Three Foundations of a Great Personal Life, Great Leadership and a Great Company: Integrity, Authenticity, and Committed to Something Bigger than Oneself.”