Offshore wind farms could generate more than enough energy to meet Maryland’s annual electricity consumption, according to a just-published study by researchers at the University of Delaware. The potential power output is nearly double current energy demands for the state, even when taking into account various limitations on where to place equipment in the Atlantic.

Existing Maryland law requires 18 percent of electricity to come from renewable energy sources by 2022. The law was passed before the potential supply of offshore wind was documented—no one even knew whether offshore wind was of significant size.

Offshore wind could be important to meeting Maryland’s requirement because it is more abundant and more steady than land-based Maryland wind, and is less expensive than solar power. 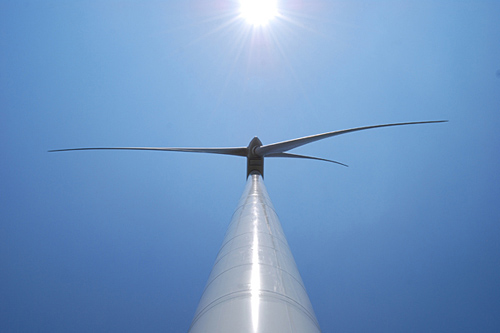 “If the offshore resource remains unused, meeting the state’s renewable energy requirement will be more costly to Maryland, as is true for the other mid-Atlantic coastal states,” Kempton noted.

The study found that a maximum of 7,800 wind turbines could provide an annual average output of 14,000 megawatts, equivalent to 189 percent of Maryland’s electric load. The calculation includes the use of new technology for deep-water turbines, but even using only commercially proven, shallow-water equipment, the energy generated would total 70 percent of the state’s annual demand. This is the maximum resource possible, but actual development of offshore wind would start with power plant-sized units of 80 to 150 turbines.

In determining areas of the ocean suitable for offshore wind farm development, the researchers excluded zones of possible conflict. The entire Chesapeake Bay was excluded.  Fish havens and areas where birds migrate were not counted, as well as shipping routes.

The study also considered how visible the turbines would be from shore, placing the turbines eight nautical miles away so that visual impact would be minimal.

Along with the rest of the mid-Atlantic region, large shallow areas and strong winds off Maryland’s coast make it suitable for currently available offshore windmill technology.

The study found that average power output would be highest in the winter and lowest in the summer. Extra power generated during the winter months could service neighboring states, while Maryland would need to rely on other sources during a comparative shortage in the summer. Developers could position windmills to capitalize on seasonal wind direction, such as to the southwest for summer winds.

The findings were recently published in the Elsevier journal Renewable Energy.

More information on offshore wind is available at this CEOE website.