Portable Diagnostics Designed To Be Shaken, Not Stirred

As medical researchers and engineers try to shrink diagnostics to fit in a person’s pocket, one question is how to easily move and mix small samples of liquid.

University of Washington researchers have built and patented a surface that, when shaken, moves drops along certain paths to conduct medical or environmental tests.

“This allows us to move drops as far as we want, and in any kind of layout that we want,” said Karl Böhringer, a UW professor of electrical engineering and bioengineering. The low-cost system, published in a recent issue of the journal Advanced Materials, would require very little energy and avoids possible contamination by diluting or electrifying the samples in order to move them.

The simple technology is a textured surface that tends to push drops along a given path. It’s inspired by the lotus effect – a phenomenon in which a lotus leaf’s almost fractal texture makes it appear to repel drops of water. 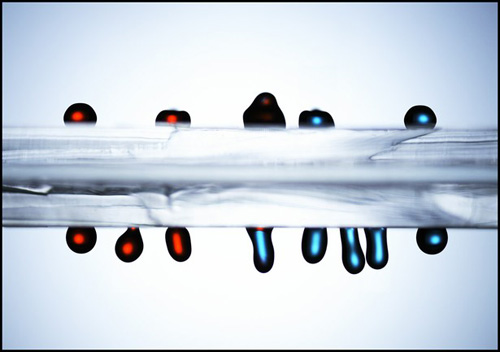 Drops of red and blue liquid move along the upper and lower surface of the vibrating UW platform at speeds up to 1 inch per second. This combined image shows drops as they move toward the center and merge. Image credit: Karl Bohringer, UW

“The lotus leaf has a very rough surface, in which each big bump has a smaller bump on it,” Böhringer said. “We can’t make our surface exactly the same as a lotus leaf, but what we did is extract the essence of why it works.”

The UW team used nanotechnology manufacturing techniques to build a surface with tiny posts of varying height and spacing. When a drop sits on this surface, it makes so little contact with the surface that it’s almost perfectly round. That means even a small jiggle can move it.

Researchers used an audio speaker or machine to vibrate the platform at 50 to 80 times per second. The asymmetrical surface moves individual drops along predetermined paths to mix, modify or measure their contents. Changing the vibration frequency can alter a drop’s speed, or can target a drop of a certain size or weight.

“All you need is a vibration, and making these surfaces is very easy. You can make it out of a piece of plastic,” Böhringer said. “I could imagine this as a device that costs less than a dollar – maybe much less than that – and is used with saliva or blood or water samples.”

A drop of liquid sits on the textured silicon surface that has arced rungs to guide the drop, and a grid of pillars to keep the drop in the channel. Image credit: Karl Bohringer, UW

In testing, different versions of the UW system could move the drops uphill, downhill, in circles, upside down, or join two drops and then move the combined sample.

The type of system is known as a “lab in a drop”: all the ingredients are inside the drop, and surface tension acts as the container to keep everything together.

A student tried using a smartphone’s speaker to vibrate the platform, but so far a phone does not supply enough energy to move the drops. To better accommodate low-energy audio waves, the group will use the UW’s electron beam lithography machine to build a surface with posts up to 100 times smaller.

“There’s good evidence, from what we’ve done so far, that if we make everything smaller then we will need less energy to achieve the same effect,” Böhringer said. “We envision a device that you plug into your phone, it’s powered by the battery of the phone, an app generates the right type of audio vibrations, and you run your experiment.” 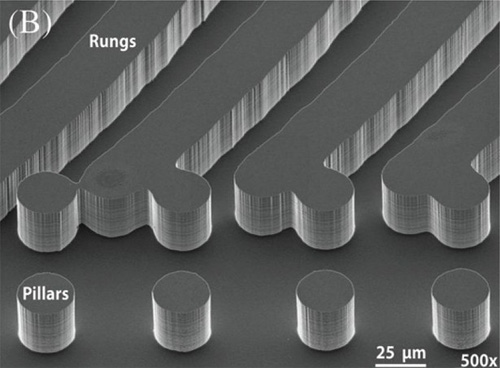 The research was funded by the National Science Foundation, the National Institutes of Health, Intel and the UW’s Technology Gap Innovation Fund.