Pollination with Precision: How Flowers Do It

Pollination could be a chaotic disaster. With hundreds of pollen grains growing long tubes to ovules to deliver their sperm to female gametes, how can a flower ensure that exactly two fertile sperm reach every ovule? In a new study, Brown University biologists report the discovery of how plants optimize the distribution of pollen for successful reproduction.

PROVIDENCE, R.I. [Brown University] — Next Mother’s Day, say it with an evolved model of logistical efficiency — a flower. A new discovery about how nature’s icons of romance manage the distribution of sperm among female gametes with industrial precision helps explain why the delicate beauties have reproduced prolifically enough to dominate the earth.

In pollination, hundreds of sperm-carrying pollen grains stick to the stigma suspended in the middle of a flower and quickly grow a tube down a long shaft called a style toward clusters of ovules, which hold two female sex cells. This could be a chaotic frenzy, but for the plant to succeed, exactly two fertile sperm should reach the two cells in each ovule — no more, no less. No ovule should be left out, either because too many tubes have gone elsewhere, or because the delivered sperm don’t work.

In the journal Current Biology, Brown University biologists report that flowers have evolved an elegant safeguard system to ensure that only the minimum necessary number of pollen tubes will reach each ovule.

“There is a mechanism that prevents too many pollen tubes from delivering too many sperm,” said Mark Johnson, associate professor of biology at Brown and senior author on a new paper detailing the discovery. “But the other cool thing is that there is also a way to salvage fertilization if the first father is a dud.”

Essentially the successful fusion of sperm and female gametes immediately terminates the signaling that attracts pollen tubes to the ovule, a finding by first author Kristin Beale, a graduate student in Johnson’s lab.

“Previous models had said that pollen tube entry was sufficient — that once one pollen tube entered, others would be repelled,” Beale said. “But we show it’s the process of gamete fusion.”

Added Johnson: “Until fusion has happened, there’s no guarantee that you’ll have successful seed formation.” 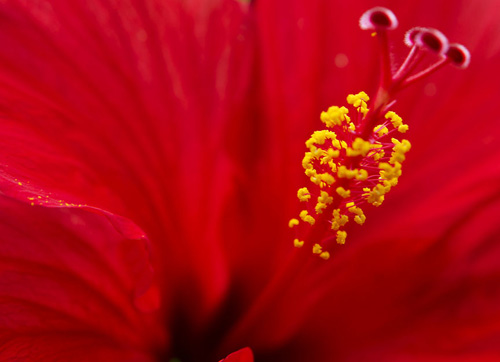 It's all about the prevention of ‘polytubey’. Flowers make certain that gamete fusion has successfully occurred before other pollen are repelled. That allows the process of fertilization to continue if the first pollen grain turns out to have been a dud. Image credit: Mike Cohea/Brown University

A mystery solved with mutants

Although scientists have studied plant reproduction for centuries, the tools to make Beale’s finding have only become available in the last few years, Johnson said. Armed with these new capabilities, the team, including second author Alexander Leydon, conducted a series of experiments in Arabidopsis plants, a model plant for research.

The most important tool was a pollen mutant the team had discovered called hap2. The mutant grows a pollen tube to an ovule and bursts to release sperm, a normal course of events. But hap2’s sperm can’t fuse with the female gametes. It is a convenient dud. The team also employed new techniques that allow pollen tubes and the sperm they carry to fluoresce as green or red. That way they could watch as different tubes interacted with the ovules.

In their first experiment, the team sent in healthy sperm, half of which were carried by red-tagged tubes and half of which by green-tagged tubes. With nothing but healthy sperm in the mix, only about 1 percent of ovules ended up with multiple pollen tubes (a phenomenon that Beale calls “polytubey”). Ovules could block polytubey in the vast majority of cases.

Then the team unleashed a sampling of sperm in which one in four were duds. Polytubey increased tenfold. One unfortunate ovule ended up attracting four tubes, indicating polytubey is allowed until a fertile sperm comes along. 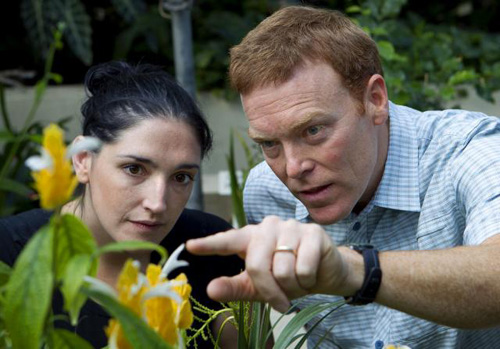 No more, no less. Exactly two fertile sperm should reach the two cells in each ovule. Kristin Beale and Mark Johnson found that Arabidopsis, a convenient research plant, has met the “not too many, not too few” challenge. Image credit: Mike Cohea/Brown University

In another experiment with mutant sperm tagged red and normal, or “wild-type” pollen tubes tagged green, the researchers saw polytubey only where there was a red glow under the microscope.

In the paper the team also showed that one of two cells responsible for attracting pollen tubes will persist in the ovule until gamete fusion occurs. While the team didn’t identify the exact signaling molecule responsible for blocking polytubey after gamete fusion, Johnson said, the study does help scientists determine what that signaling molecule must be like. He said it must be fast-acting and potent.

Johnson said the research may eventually have applications in agriculture, either because it could aid fertilization when it is hindered, for instance by bad environmental conditions, or commercial corn breeding. Seed companies create hybrids by fertilizing corn with hand-collected pollen, and to do this they need varieties where male fertility can be controlled.

Nature’s own system, however, appears to guarantee that virtually every ovule will have exactly the right amount of healthy sperm. By employing this newly understood mechanism, flowers thereby become the most prolific moms they can be.

The National Science Foundation and the National Institutes of Health Brown University Initiative to Maximize Student Development funded the work.