EAST LANSING, Mich. — When a plant goes into defense mode in order to protect itself against harsh weather or disease, that’s good for the plant, but bad for the farmer growing the plant. Bad because when a plant acts to defend itself, it turns off its growth mechanism.

But now researchers at Michigan State University, as part of an international collaboration, have figured out how plants can make the “decision” between growth and defense, a finding that could help them strike a balance – keep safe from harm while continuing to grow.

Writing in the current issue of the Proceedings of the National Academy of Sciences, Sheng Yang He, an MSU professor of plant biology, and his team found that the two hormones that control growth (called gibberellins) and defense (known as jasmonates) literally come together in a crisis and figure out what to do.

“What we’ve discovered is that some key components of growth and defense programs physically interact with each other,” he said. “Communication between the two is how plants coordinate the two different situations.

We now know where one of the elusive molecular links is between growth and defense.” 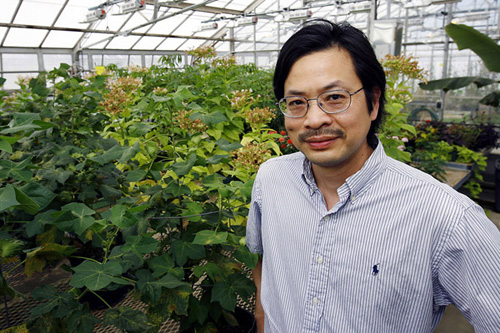 MSU plant biologist Sheng Yang He led an international team of researchers that studied how plants are able to switch from growth mode to defense mode. The findings are published in the Proceedings of the National Academy of Sciences. Image credit: Michigan State University

This is important because now that scientists know that this happens, they can work to figure out how to “uncouple” the two, He added.

“Perhaps at some point we can genetically or chemically engineer the plants so they don’t talk to each other that much,” He said. “This way we may be able to increase yield and defense at the same time.”

In this way, He said plants are a lot like humans. We only have a certain amount of energy to use, and we have to make wise choices on how to use it.

“Plants, like people, have to learn to prioritize,” he said. “You can use your energy for growth, or use it for defense, but you can’t do them both at maximum level at the same time.”

The work was done on two different plants: rice, a narrow-leafed plant, and Arabidopsis, which has a broader leaf. This was significant because it demonstrated that this phenomenon occurs in a variety of plants. 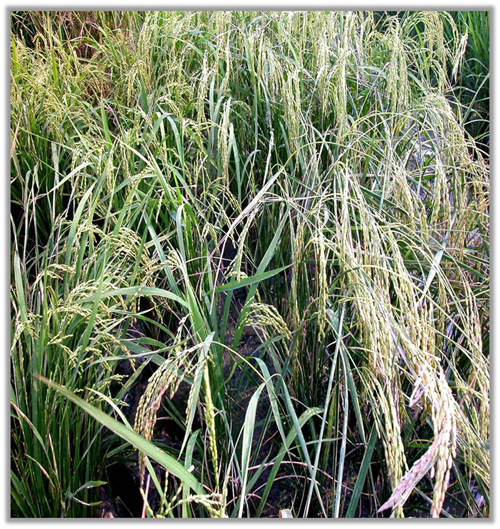 MSU plant biologist Sheng Yang He studied rice plants for a research project designed to ultimately improve a plant's ability to grow while at the same time defend itself against pests and other stresses. The project was detailed in a paper published in the Proceedings of the National Academy of Sciences. Image credit: Michigan State University

He was one of the lead investigators on an international team of scientists that studied the issue. Other participating institutions included the Shanghai Institutes for Biological Sciences, Hunan Agricultural University, the University of Arkansas, Duke University, Yale University and Penn State University.

Funding was provided by the National Institutes of Health, the U.S. Department of Energy and the Howard Hughes Medical Institute.

He is a Howard Hughes Medical Institute/Gordon and Betty Moore Foundation Investigator. Earning the prestige honor last year, He is one of only 15 in the country.