Ecologists at Princeton University recently discovered top-ranking male baboons exhibit higher levels of stress hormones than second-ranking males, suggesting that being at the top of a social hierarchy may be more costly than previously thought. 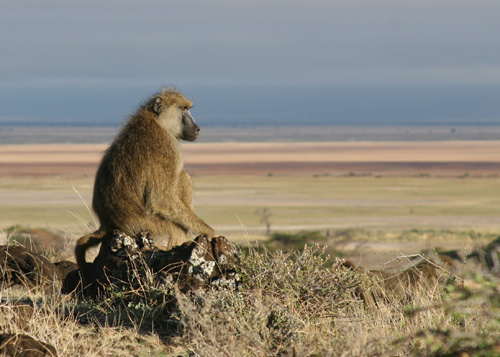 By studying baboon groups in Kenya, the researchers, for the first time, identified higher levels of stress hormones, or glucocoricoids, in alpha males as compared to beta males.

An adult male mate-guarding a fertile female (note the sexual swelling) during a sexual consortship. Successful mate guarding allows the male to maintain exclusive access and to obtain any fertilizations. This involves the male following the female closely, being vigilant and fighting off any males that might disrupt the consortship. Image credit: Jeanne Altmann, Ecology and Evolutionary Biology Dept., Princeton University

“These results are very interesting because they provide insights into complex societies and have potential applications to human behavior and societal structures,” says Kaye Reed, program director for physical anthropology at the National Science Foundation which funded the study. 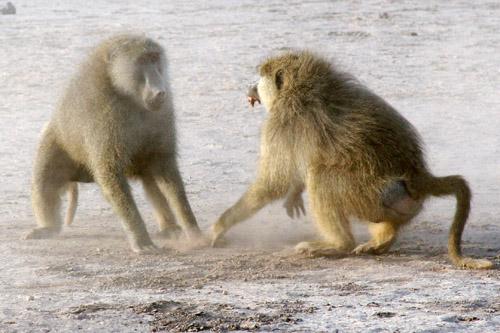 Two adult male baboons fighting at very close range. The one on the left is giving a threat by staring and raising his eyebrows, perhaps also slapping the ground; the one on the right exhibits a classic fear grimace, perhaps accompanied by a scream. Such a grimace also bares the male's teeth, reinforcing the reality that even a lower-ranking male can inflict debilitating, potentially lethal damage in a contact fight. Each male seems to be both lunging and pulling back from an attack, exhibiting the common ambivalence about actually engaging in physical combat that has the potential to lead to puncture wounds. Image credit: Jeanne Altmann, Ecology and Evolutionary Biology Dept., Princeton University

The study’s results are in the July 15 issue of the journal Science.

For more information on levels of stress hormones, testosterone in male baboons and the costs of high social rank, see Princeton’s press release.