The scene shows dunes and sand ripples of various shapes and sizes inside an impact crater in the Noachis Terra region of southern Mars. Patterns of dune erosion and deposition provide insight into the sedimentary history of the area.

The Mars Reconnaissance Orbiter has been examining Mars with six science instruments since 2006. Now in an extended mission, the orbiter continues to provide insights about the planet’s ancient environments and about how processes such as wind, meteorite impacts and seasonal frosts are continuing to affect the Martian surface today. This mission has returned more data about Mars than all other orbital and surface missions combined. 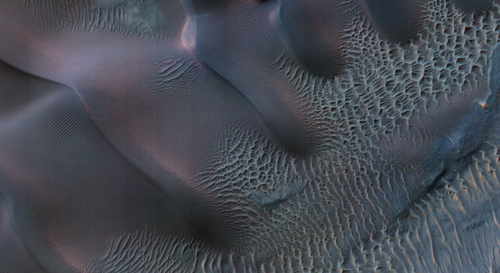 More than 20,600 images taken by HiRISE are available for viewing on the instrument team’s website: https://hirise.lpl.arizona.edu. Each observation by this telescopic camera covers several square miles, or square kilometers, and can reveal features as small as a desk.

HiRISE is operated by the University of Arizona, Tucson. The instrument was built by Ball Aerospace & Technologies Corp., Boulder, Colo. The Mars Reconnaissance Orbiter project is managed by the Jet Propulsion Laboratory, Pasadena, Calif., for NASA’s Science Mission Directorate, Washington. JPL is a division of the California Institute of Technology, also in Pasadena. Lockheed Martin Space Systems, Denver, built the spacecraft.

For more information about the Mars Reconnaissance Orbiter, see www.nasa.gov/mro.