In 1968, when Su Wei left his family behind and voluntarily joined the millions of urban youth who were being sent by Chinese leader Mao Zedong into the countryside to work the land as part of a “re-education” movement, his spirit was nearly broken.

As part of Mao’s “up to the mountains and down to the villages” campaign, initiated in 1968 to quell civil unrest during the Cultural Revolution, all urban 16-year-olds were commanded to travel to rural villages to be schooled in hard agricultural labor. More than 20 million teenagers were sent to work in the countryside, often devoting more than a decade of their lives to farm labor. Not only did this deprive them of a formal education, but parting from their families was a heart-wrenching experience for most of the youngsters. However, for then 15-year-old Su — now a senior lector in East Asian languages at Yale — leaving life in Guangzhou (Canton) represented an escape from an even more brutal life, and so he set off eagerly for the countryside even before he was required to do so.

At the time, Su’s father, famous as an intellectual leader in Guangzhou, was imprisoned on the charge of being a spy for the Kuomintang in Taiwan, and an older brother was sent to prison because of his family association. His mother and older sisters had been carted off to what was known as the “cowhouse,” an informal prison. The teenaged Su was left at home with his grandmother and a younger sister. For more than a year, he witnessed the daily beating of his grandmother and the vandalizing of his home by Army soldiers.

“We became known as a ‘black’ family because of the accusations against my father,” recalls Su. “I was not a fighter, but I learned to fight so I could try to protect my grandmother. I had to be the man of the house, and I was also responsible for bringing supplies to my father and brother in prison. My life became a burden. I was young, and there was too much weight on my shoulders. So I was anxious to escape to the countryside.” 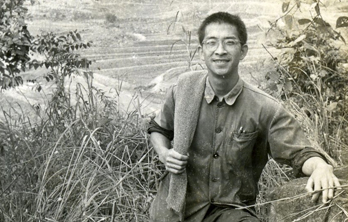 This photo of Su Wei was taken on Hainan Island, where Su Wei spent 10 years of his life as one of China’s “sent-down” youth. There, he learned life as a farmer and earned a reputation as a skillful reporter and writer. Image credit: Yale University

Leaving his grandmother and sister in the care of a relative, Su left home and spent a decade of his life on Hainan Island, where many of the so-called “sent-down” youth from southern China were transported to become farm laborers. Nearly 40 years later, he reunited with former farm-mate Tony Fok, who is now a composer. After a visit to Hainan Island in 2007, the two decided to collaborate on a project to commemorate their experience there. Su wrote a poem series, “Ask the Sky and the Earth,” which Fok then set to music for orchestra.

When Yale Concert Band director Thomas C. Duffy heard the composition, he asked permission to transcribe the piece for wind band with chorus. The Yale Concert Band, accompanied by the SYGQ Chorus, will present the U.S. premiere of “Ask the Sky and the Earth: A Cantata for the Sent-down Youth” on Friday, Feb. 11, in Woolsey Hall and will perform its New York premiere on Saturday, Feb. 26, at Carnegie Hall.

For Su, the performance of his poem series set to music is one of the many positive outcomes of a challenging — and sometimes tragic — time in his life.

Despite the hardships of his youth, he wrote “Ask the Sky and the Earth” as a “love song” for his native China, its land and its people, he says.

“I was shown many kindnesses during those years I grew up, and the memories of those kindnesses have supported me throughout my life,” Su explains.

He recalls how one of the soldiers who was present during the harassment of his family watched Su one day as he used a sewing machine to re-fashion his sisters’ old clothing into garments he could wear as a farmer on Hainan Island. Days later, the soldier summoned him to a place where they could freely talk. The soldier praised the teenager for his fortitude and resourcefulness, and passed on words that helped Su carry on in his most difficult moments. 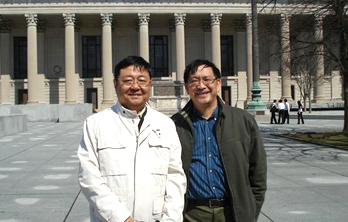 Su Wei and composer Tony Fok, former farm-mates in China, reunited at Yale just before the 40th anniversary of their time together as China’s “sent-down” youth. Image credit: Yale University

Later, on Hainan Island, the leader of the small team of farm laborers to which Su belonged gave him a safe place where he could read books and write.

“I was very independent, and the other young guys in my group were always accusing me of not listening,” recounts Su. “They would bully me. They would open my diary and write cruel things in it. They destroyed the box of books I had brought from home. At this low point in my life, my team leader invited me to spend nights in his kitchen so I could read and write without being attacked. He watched over me, and he treated me like a young son. His act of kindness has been a light for me ever since.”

Su performed backbreaking labor for three years on Hainan Island, removing mountainous rocks and boulders to clear the land for the planting of rubber trees.

“I was a good laborer,” Su recalls. “Although I weighed about 90 pounds, I would carry 100 pounds on my shoulders.”

One day, his farm leader asked Su to write an article to promote the work of the team, promising the reluctant teenager that he would have two days of rest in return.

“I didn’t want to write anything publicly, but I was very, very tired, and so I agreed,” Su says.

The article was published in the South China Daily, the region’s major newspaper.

“Overnight, I became a famous guy in my village,” says Su. “The article changed my whole life.”

Su was then summoned to become a local reporter in the village. With the exception of one year — when he was sent back to the farm after leaders learned of his family’s reputation — he worked as a village reporter until he was 25 years old. During that time, he gained a reputation as a skilled writer and educated himself enough to be able to gain admission to college without a high school degree.

“I failed the math exam, but was accepted because of my writing skills,” says the Yale faculty member. Su graduated from Sun Yat-sen University at age 29, and then in 1982 was among the first group of Chinese students to come to the United States, where he earned a M.A. at the University of California-Los Angeles.

A reunion of fellows

In 1986 Su, then a visiting scholar at Harvard University, decided to return home to China.

“I loved my country and wanted to go back and serve it,” says Su, who got a teaching job at the Institute of Literature at the Academy of Social Sciences in Beijing. From 1989 to 1992, he was one of the intellectual leaders of the Tiananmen Square democracy movement in China. He had to flee his native country after being blacklisted by the government and returned to the United States, first teaching at Princeton and later coming to Yale in 1998.

Su eventually was able to make visits home to China. While there in 2006, he saw a television interview featuring Fok, who sang a song that was based on a poem Su had written while the two men were on Hainan Island.

“My poem was never published, but Tony remembered it from the time we were nearby farm laborers,” says Su. “On television, he said that he has been trying to find me. Eventually, he got my e-mail from a farm-mate, and he came to Yale to visit me.”

During that visit, Fok and Su stayed up an entire night reminiscing about their days as sent-down youth, and the composer invited Su to write a poem that he could set to music to commemorate the 40th anniversary of Zedong’s campaign in 2008.

Su, who has also written two novels and three essay collections in Chinese, says that the resulting “Ask the Sky and the Earth” took him a year to complete. He wanted to capture the bittersweet experience of life in rural China for himself and other sent-down youth: the hardship and tragedy, the idealism and fervent spirit, and the many kindnesses of the older village residents.

“[It] attempts to convey the spirit of this epoch, the sentiments of an entire generation as they think back upon their youths and ‘give thanks to life, give thanks to the land,'” he wrote in a preface to the poem, which was translated into English by Su’s former Yale student Austin Woerner ’08.

Su says he feels immense gratitude that Duffy has transcribed the cantata for the Yale Concert Band performance, which features 140 choral singers, including members of the Yale Chinese Chorus as well as those from other area choral groups (together called the SYGQ Chorus). The chorus is directed by Chai-lun Yueh, chair of the voice department at the Hartford Conservatory.

“I learned of the piece from Shinik Hahm [music director of the Yale Philharmonia], who knows of my interest in trying to connect and augment music and history,” says Duffy. “I met with Su and read his poem series and thought that it was very sentimental social realism. The orchestral music Fok composed for it is very creative and beautiful, and I could hear it as a wind band performance. Transcribing it for the Yale band allowed a way for me to connect our musicians with an important point in history and present beautiful music that the world should have. Having the personal connection of Su made it an opportunity that I couldn’t help but jump into.”

The performance also features Yale student Chun Ho Lai playing on the xiao, an indigenous Chinese flute that he had sent to campus from his home in China. Choral singers will wear blue robes made of cloth from China.

“It’s going to be a stunning performance,” says Duffy.

Su, who has attended the rehearsals for the performance, says that he cannot help but to become sentimental as he hears his poem series performed by students at Yale — which, he says, is now his home.

“Sometimes, as the singers are performing in rehearsal, they have cried, too,” says Su. “It is very touching for me.”

As a teacher of the Chinese language at Yale and the coach of the Yale Chinese Language Debate Team, Su says that he tries to show the same kindness to his students that he experienced when he was their age in the farm villages of China.

“My students become like family,” he says. “My office becomes a ‘home’ for many of them, and I try to help them with any problem they have, academic or personal. In my own life, I have always been a lucky guy even in the worst situations, and I give thanks for everything. Maybe I give thanks to God, maybe to Fortune, maybe it’s to Nature — whatever it is, I just want to treat everyone with the same kindness that helped me to live throughout my darkest times.”