With many of the world’s 18 species of penguins experiencing substantial declines during the past two decades, international scientists writing in the current issue of Conservation Biology are calling for marine protected areas and partially protected areas to help penguins cope with food scarcity, oil pollution, climate change and being caught in fishing nets.

The scientists’ examination of how human activity interferes with penguin populations is based in part on findings in the 2013 book “Penguins: Natural History and Conservation,” by Dee Boersma, UW professor of biology and director of the Center for Penguins as Ocean Sentinels, and Pablo Garcia-Borboroglu, head of the Global Penguin Society. 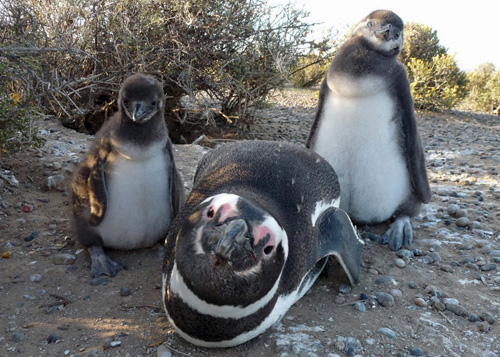 A Magellanic penguin and two chicks. Image credit: U of Washington

Boersma and Garcia-Borboroglu are co-authors on the new paper out Aug. 6.

In 2013, eleven species of penguins were listed as “threatened” by the International Union for Conservation of Nature, two as “near threatened” and five as “of least concern.” The new article in Conservation Biology says that the future resilience of penguin populations in the face of climate change impacts will almost certainly depend upon addressing current threats to existing habitat degradation on land and at sea.

Where it is impractical or politically unfeasible to create large-scale marine conservation reserves off-limits to all human activities, the co-authors suggest alternatives using ecosystem-based management such as:

“Penguins need forage fish and marine protected areas can build resiliency that benefit people as well as penguins,” Boersma said. “Penguins are ocean sentinels and what is good for penguins often benefits people.”