For hundreds of years, Adélie penguins have been breeding in the West Antarctic Peninsula (WAP), which has recently become one of the most rapidly warming areas on Earth.

At Palmer Station, a U.S. research base located along the WAP, scientists have been monitoring Adélie penguin population declines for decades. There were 15,000 breeding pairs of Adélie penguins in 1975; but today only a few thousand pairs are left.

Now, in a study reported in the Nature publication Scientific Reports, University of Delaware oceanographers consider whether Adélie penguins and gentoo penguins — newcomers to the Palmer Station region over the last two decades — may be competing for the same food resources and whether this might exacerbate the Adélie population decline. 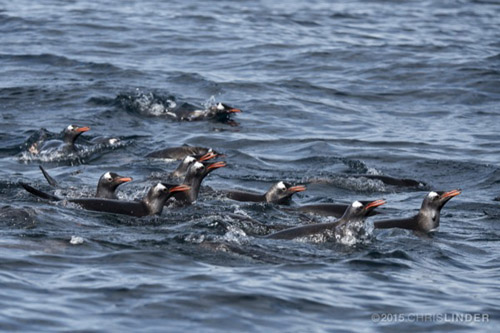 “So we set out to explore whether the Adélies and gentoos were eating out of the same lunch box, so to speak,” explained Megan Cimino, a doctoral candidate in UD’s College of Earth, Ocean, and Environment and the paper’s lead author.

Co-authors on the paper, “Climate-Driven Sympatry May Not Lead to Foraging Competition Between Cogeneric Top-Predators,” include UD’s Mark A. Moline, director of the School of Marine Science and Policy, and Matthew J. Oliver, Patricia and Charles Robertson Professor of Marine Science and Policy; and William R. Fraser and Donna L. Patterson-Fraser from Polar Ocean’s Research Group.

To test whether the species were competing, the researchers tagged penguins with small satellite transmitters and depth recorders to track where the penguins went and how deep they were diving. The tags were attached to a different penguin every three days over the month-long 2011 study which took place during the chick-feeding phase of the breeding cycle when adults are feeding chicks and the parental foraging ranges of both species overlap. Each penguin completed a few foraging trips and hundreds to thousands of dives while tagged.

Additionally, the research team used an autonomous underwater vehicle (AUV) called a REMUS to sample the water where the penguins were foraging, something few researchers have done before. The REMUS provided important measurements on temperature, salinity and how much light was in the water (important for visual predators like penguins).

It also measured the amount of phytoplankton and krill, the main food source for both penguin species, present in the water, systematically allowing the researchers to measure multiple levels of the food chain in the same study, from phytoplankton to krill to penguins. 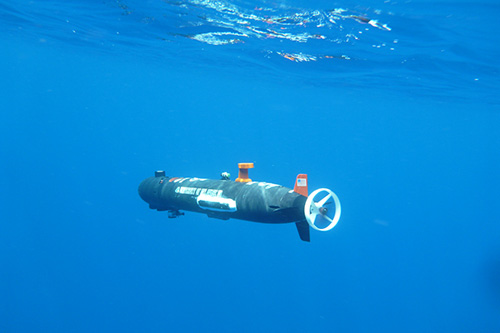 “Gaining an understanding of where krill are in relation to their food, and where penguins are in relation to their food was an important part of the study,” Cimino said. “Without the REMUS — which can swim at about the same speed and dive almost as deep as a penguin — we would not know what’s going on in the waters where the penguins are, we would only know that the penguins were there.”

An analysis of the data on thousands of foraging dives revealed that while the Adélie and gentoo penguins generally foraged in different areas, there was a small area of overlap between the two populations. Interestingly, when the species overlapped, the gentoos shifted behavior and foraged at deeper depths — nearly 35 percent — below the Adélie penguins.

Both penguin species are capable of foraging as deep as 150 meters below the ocean surface, yet over the study period, the Adélies foraged in the upper 50 meters of the water and they didn’t change their behavior at all when their foraging area overlapped with the gentoos. The gentoos, however, often foraged as deep as 150 meters when in overlapping areas. The researchers theorize this may be a strategy to limit competition.

“It was unexpected to see the Adélies foraging much shallower than the gentoos when we know they are capable of deeper dives,” Cimino said. Furthermore, the fact that both penguin species were provisioning chicks during the satellite tracking implied that the adults were returning to the nest with enough food, further suggesting that competition was not limiting food resources.

Krill, the penguin’s main food source, are an important prey in the Southern Ocean because they aggregate in large groups and have high nutritional value. The researchers used the REMUS to test whether krill were affiliated with any specific water properties. The team found that krill were mostly associated with areas where the water became darker at a shallower depth and the bulk of phytoplankton, its food source, was located deeper in the water.

Since there are few places to hide in the open ocean except in darkness, this led the research team to determine that the krill were selecting for areas where they could eat, but also avoid being eaten by visual predators, such as penguins.

“The novel aspect of the study was that the environmental sampling done by the robot was informed by the location of the penguins. By doing this, we could couple the behavior of these two species with the distribution of their prey and make distinctions that were not possible beforehand,” explained Moline.

More work to be done

While recent theories have suggested that increased competition for krill is a main driver of Adélie penguin population declines, the oceanographers suspect the Adélie declines along the WAP may be more likely due to direct and indirect climate impacts on their life histories.

If the WAP climate continues to warm, sea ice extent and coverage duration will continue to decrease, potentially altering the food web and raising questions about what effect changes in winter habitat will have on the species’ survival, Cimino said.

“It is cool to see that two species can exist in very close quarters — less than 20 kilometers apart — and have different foraging habitats. But if their winter habitats are changing as well, for better or worse, it will likely have a direct effect on their population and how many penguins come back to breed each season,” Cimino said.

This work was funded by the National Science Foundation and by the NASA Biodiversity Program.