East Lansing, Mich — Monitoring oxygen levels in water has applications for oil spills, fish farming, brewing beer and more – and a professor at Michigan State University is poised to help supply that need.

The concept of oxygen sensors isn’t new. The challenge, however, has been manufacturing one that can withstand fluctuations in temperature, salinity, carbon dioxide, phosphates and biological wastes. Ruby Ghosh, associate professor of physics, was able to overcome those obstacles as well as build one that provides real-time data and is relatively inexpensive.

“We have been able to take advantage of steep price drops in components used for telecommunications and medical imaging,” said Ghosh, who will be presenting her research at the Bio-Optics: Design and Application meeting April 4-6 at Monterey, Calif. “We were able to build a sensor with relatively inexpensive components, yet it is sensitive, reliable and can operate in a variety of environments.” 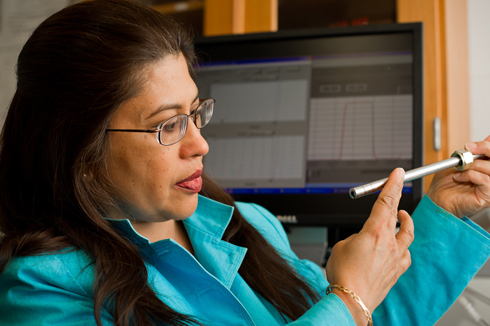 Ruby Ghosh, associate professor of physics, has invented a dissolved oxygen sensor that has applications from fisheries to breweries. Photo by: Greg Kohuth.

Constantly testing dissolved oxygen is critical in industries such as:

The prototypes were built in Ghosh’s MSU lab, which allowed her undergraduate students to benefit from working on the project. (Two of them have presented at international conferences and published in peer-reviewed journals.) To test her prototypes, Ghosh and her students worked with Michigan’s fish farmers to see how they would hold up in a year-round, outdoor environment.

“My lab focuses on solving real-life problems through our technology,” Ghosh said. “Raising trout for recreational fishing is economically important to Michigan, and our prototype proved that our sensor performs well in the field and could help that industry thrive.”

Ghosh’s research is funded in part by the National Science Foundation, the U.S. Department of Energy and the state of Michigan.