When one of the sexually transmitted virus’ two strains enters the body through genital tissue,
it travels to neurons near the spine that the body’s defenses have learned not to kill – even when infected – because they don’t regenerate easily. And there the virus hides, occasionally reactivating to cause blisters that can break to cause painful sores. Ripe to invade a sexual partner.

“Once you get the neurons infected, you can never get rid of the infection,” said Dr. Akiko Iwasaki, a Howard Hughes Medical Institute Investigator and Professor of Immunobiology at Yale School of Medicine. “But if we can inhibit replication of the virus, we make the response milder and help people suffering from this disease.” 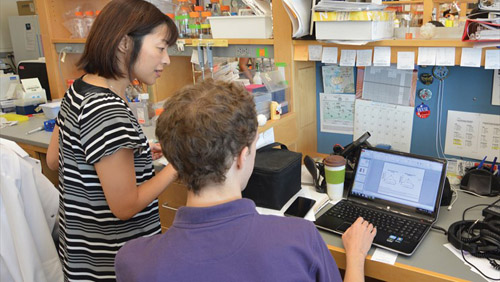 The World Health Organization estimates that 536 million people between the ages of 15 and 49 worldwide live with herpes simplex virus -2 (HSV-2), or about 16 percent of the world’s population within that age range.

HSV-2 affects women more than men, leaving them vulnerable to transfer the disease to their newborn children, which is often fatal. In addition, HSV-2 greatly increases the risk of infection by HIV, the virus that causes AIDS.

Ever since receiving the first of two seed grants from Women’s Health Research at Yale in 2003, Iwasaki’s lab has earned significantly larger funding from the National Institutes of Health for studies that have established groundbreaking insights into the transmission, treatment and possible prevention of herpes.

“Women’s Health Research at Yale has really helped us to get up and running,” Iwasaki said. “Fifteen years ago, virtually nothing was known about immune protection of genital tissue. Now we’re getting to crack the puzzle.”

The obstacles to creating an effective vaccine that protects someone from contracting herpes involve both the virus itself and the tissue where it typically enters the body. 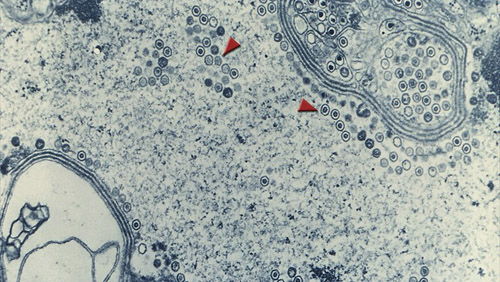 About 16 percent of people between the ages of 15 and 49 worldwide live with herpes simplex virus-2, seen here inside the nucleus of a cell. Photo credit: CDC

Most vaccines generate antibodies – the body’s natural defenses that attack invading microorganisms that can cause disease. But viruses like HIV and influenza mutate to escape detection, and HSV has coat proteins that allow them to escape antibody clearance. This makes an antibody-based universal vaccine very difficult to develop.

Instead, Dr. Iwasaki’s team has attempted to marshal infection-fighting cells called T-lymphocytes that recognize stretches of the herpes virus’ internal proteins that are less prone to mutate without affecting their vital functions.

“We’re trying to make a shield with T-cells that the virus can’t escape,” Iwasaki said.

But T cells don’t naturally survey vaginal tissue in great numbers, prompting Iwasaki’s team to create a new vaccine strategy they call the “prime and pull” technique. This involves first stimulating the body to produce a memory response to HSV-2 and then drawing the T-cells to the vagina with the direct application of tiny protein signaling molecules called chemokines.

Using “prime and pull,” Iwasaki’s team protected mice from a lethal herpes infection with a 100 percent survival rate. And with a second WHRY seed grant in 2013, the lab demonstrated evidence that the technique can protect guinea pigs from recurring bouts of herpes after an initial infection.

Iwasaki plans to test the method with different vaccines to see which provides the best protection.

“I’m very excited,” she said. “In the lab, we are focused on herpes. But it doesn’t have to stop there. It’s a model.”

Iwasaki envisions possible applications to protect against and treat for shingles, HIV and cancer.

“The more we learn about how immunity works, the more we can apply it to the many conditions we all may suffer,” said Dr. Carolyn M. Mazure, Director of Women’s Health Research at Yale.

“It really gives us the freedom to try something new,” Iwasaki said. “With NIH grant applications, you basically have to have done the work already.”

She noted how it was only after studying how mice protect themselves from natural herpes infections that her laboratory got the idea to mimic the effect of the chemokine pool with a vaccine. That was five years ago.

“We learn everything from basic research,” Iwasaki said. “You can’t necessarily expect a quick return on the investment. You have to invest continually in basic science.”

Dr. Akiko Iwasaki received her Ph.D. and B.Sc. from the University of Toronto and her postdoctoral training from the National Institutes of Health. She joined the Yale faculty in 2000 and currently serves as an Investigator of the Howard Hughes Medical Institute and a Professor of the Department of Immunobiology and of the Department of Molecular, Cellular, and Developmental Biology. Her research focuses on the mechanisms of immune defense against viruses at the mucosal surfaces.