Just a few hundred yards from the house where Italian astronomer Galileo Galilei (1564-1642) lived in Arcetri for the last nine years of his life, the University of Delaware’s William Matthaeus is working to further the world’s understanding of the heliosphere – the big bubble of magnetism that holds the solar system together – and especially its turbulent nature.

Matthaeus, professor of physics and astronomy who specializes in heliospheric plasma physics and turbulence theory, is steering the Arcetri 2015 Workshop on Plasma Astrophysics this week. 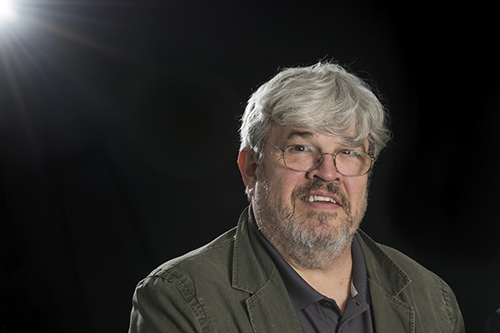 Last month he was co-author of a paper published in Astrophysical Journal that described new insights into the turbulence and temperatures of solar wind, which have presented difficult questions to astronomers and physicists for many years.

In a recent Skype interview, Matthaeus explained the significance of the new findings and the research, which was supported by a NASA grant. He worked with scientists at Southwest Research Institute, including lead author Craig DeForest, using data and images from NASA’s Solar and Terrestrial Relations Observatory (STEREO).

Q: What were you looking for in this research?

A: For many years, we have imaged things close to the sun using coronagraphs. If you have seen pictures of an eclipse, when something like an opaque disk occults the sun, you can see the corona. Coronagraphs do that. You use a disk to cover the bright part of the sun and look at the corona around the fringes. There you can see how the magnetic field organizes the hot gases close to the sun. But until recently – until heliospheric imaging – you couldn’t see very far from the occulted sun. 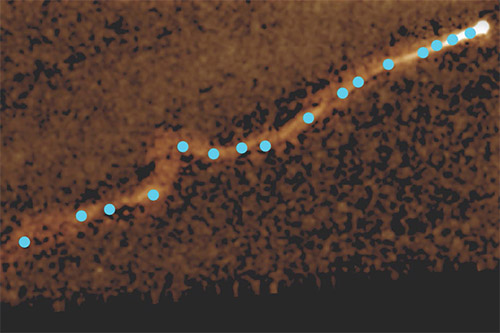 Individual clumps of tail material bob and twist in the turbulent solar wind, in this highly processed image of Comet Encke from the HI-1 instrument on board NASA’s STEREO-A spacecraft. The circular dots mark individual clumps that were tracked by the Southwest Research Institute and University of Delaware team to measure the flow of the solar wind. Image courtesy of NASA/Southwest Research Institute

Q: So you are studying information from these new images? What is your role in that?

A: Craig DeForest of the Southwest Research Institute is an expert with handling data from new technology. He has figured out ways to subtly use statistics to coax the signals out of these instruments. It’s rather remarkable. Near the Earth, the solar wind [density] is about 5 protons per cubic centimeter – a really excellent vacuum. As you go halfway or two-thirds of the way to the sun, that goes up by a factor of five or 10, so the density would be 50 or 100 protons per cubic centimeter. Now the idea is to have a camera so sensitive that it can image a gas that is essentially an excellent vacuum. Remarkable.

Craig asked me, what do you think one can do with statistical analyses of these datasets, with the very fine images he can pull out of the STEREO helisophere imaging instruments?

I was flabbergasted that it was possible to see this gas swirling around. And we started looking at ways to use mathematical statistics to pull out quantities of interest from the point of view of turbulence theory.

It’s like going to a wind tunnel and measuring the flux of the wind speed going by.

Q: What did you see that helped you understand this turbulence?

A: Comets were distractions in our images, so we wanted to remove the comets. Then we realized the bright points in back of the comets – going fast through the wind – were in the tail, which is less dense than the comet itself. We used the bright points in the comet tails as tracers, sort of like blowing bubbles in the wind. If you put tracer material into a complicated turbulence flow, it disperses randomly. Not purely randomly, you can use statistics, and that’s my specialty.

So instead of eliminating comets from the images, we decided to have a side project. That’s how science goes. You never know where the exciting result will come from. But the thing that distracted us for a while – the comets – ended up being the project itself.

Q: What have you found there?

A: What was unclear to many people was whether the solar wind was randomized the way things are that we know are turbulent. A surprisingly large number of people in the scientific community are not yet convinced that it is a turbulent system. But vortices mix things, like stirring your coffee. Vorticity in a fluid or gas is the generator of the turbulence, like the swirling motions that mix things thoroughly.

Our paper is the first to demonstrate that the solar wind is doing that…. Seeing the turbulence from a great distance away has not been done before.

Q: And you also showed that this turbulence helps to explain why the solar wind stays so hot even as it moves away from the sun?