COLUMBUS, Ohio – An Ohio State University graduate student’s study of the unprecedented reproductive practices among unisexual salamanders has earned the support of the national research crowd-funding initiative known as the SciFund Challenge.

Robert Denton, a Ph.D. student in the Department of Evolution, Ecology and Organismal Biology, is the only Ohio-based researcher among the 75 scientists selected for this year’s fundraising campaign, the second annual round of the SciFund Challenge. Participating scientists are spending the month of May soliciting financial support from anyone and everyone who is interested in their research.

Denton already has surpassed his initial goal of $1,600. With the additional support, he will be able to expand the scope of the research on whether these salamanders’ strange reproductive habits and resulting messy genetics actually give them a leg up on their competition in the wild.

These animals are known as “mole” salamanders because they spend most of the year burrowed underground. But they’re much more famous among biologists for their ability to house DNA from as many as five other salamander species in their cells. While this kind of genetic mixing often leads to sterile or unviable species, researchers suspect that in this case, the salamanders have a survival advantage. 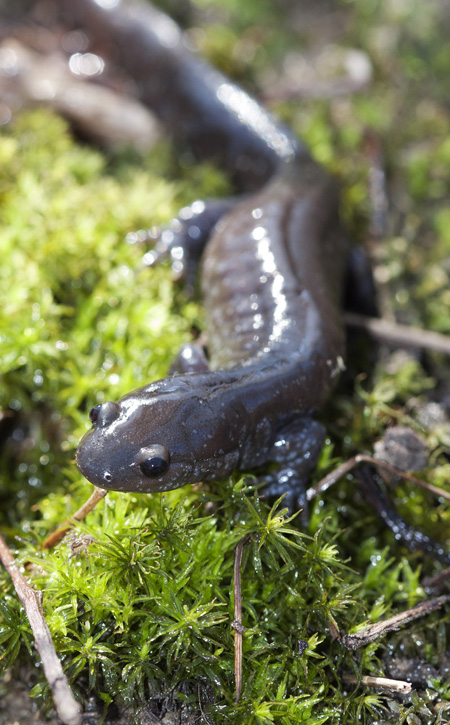 This all all-female species of salamander (above and below) can house DNA from as many as five species, which researchers predict could give them a survival advantage. Photos courtesy of Robert Denton.

Denton plans to travel to Ohio’s Crawford County to collect as many salamander tissue samples as he can – snipping off the tips of their tails – from the animals as they surface to breed. Their tails will eventually grow back.

And then he will analyze their DNA. These unisexual salamanders are all females, and they reproduce by cloning their DNA to produce identical offspring. And while other species of fish and lizards are known for this same cloning ability, the unisexual salamanders are the only known vertebrates – animals with a backbone – that can combine DNA material from at least four other species in the process of cloning their offspring.

The females do need sperm to initiate egg development and for fertilization, and they obtain it by scavenging for sperm that males deposit in salamander breeding ponds each spring. Sometimes, the eggs discard genetic material contained in the sperm. But other times, the male’s genetic material is put to use, too, during the production of the next generation. 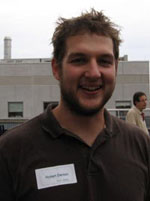 “Why they do this is the main research question,” Denton said. “Does it make a difference ecologically, in their reproduction or in their physiology? Does which species they have genomes from make a difference?”

As a result of this unusual reproductive design, the eggs the unisexual salamanders lay may contain only the mother’s DNA or a variety of combinations of the mother’s DNA and DNA from one or more males. In effect, these hybrid salamanders could be likened to humans that contain DNA from a chimpanzee, a gorilla and an orangutan, Denton explained.

“It is difficult for us to imagine multiple species sharing genetic material successfully for millions of years, but these salamanders are different from each other in the same way that we are a different species than chimpanzees,” he said. That said, they are all from the same genus, sharing a biological classification as Ambystoma salamanders that are common throughout North America.

To determine some of the effects of this DNA mixing on their endurance, Denton will then exercise the salamanders on a specially designed treadmill and follow by checking basic measures of their metabolic rate – such as how much energy they require to perform this work. If the hybrid salamanders are hardier than their single-DNA counterparts, that would suggest this added DNA gives them a physiological advantage. Those subjected to the treadmill treatment will be returned to the wild.

Denton predicts that the hybrids do have an advantage because they are an especially abundant species in Ohio and other parts of the Midwest. They also travel long distances to breed, which is especially difficult for these animals in agricultural areas.

“You’d almost predict that having all this genetic material would be kind of a mess and would harm them. But they’re very successful. Where you find them, you find a lot of them compared to other species,” Denton said. “So maybe because they have all of these genomes, they have some sort of physiological advantage.”

If they do have an advantage, that could have implications for other species – including humans. “If they have some sort of special way of managing these different genomes, that could potentially teach us a lot down the road about how to effectively manage DNA,” Denton said.

The SciFund Challenge was founded by two scientists who are based at the University of California, Santa Barbara. The initiative raised $75,000 for 49 projects in its first round in 2011, and continued a partnership this year with the website RocketHub to crowd-fund research during a campaign running throughout the month of May.

Denton explains his SciFund Challenge project online here: https://www.rockethub.com/projects/7488-sex-and-the-salamander-down-on-the-farm and is blogging about his research and outreach activities here: https://rddenton.blogspot.com/.