Orbiting astronaut controls robot on Earth, testing feasibility of CU-Boulder project on far side of the moon

An astronaut orbiting Earth in the International Space Station has remotely directed a NASA rover in California to unfurl an “antenna film” that scientists at the University of Colorado Boulder are developing for use on the unexplored far side of the moon.

When astronaut Chris Cassidy used a Space Station computer to pilot the robot across a mock lunar surface at NASA’s Ames Research Center on June 17, he demonstrated for the first time that an astronaut in an orbiting spacecraft could successfully control a robot in real time on a planetary surface. The technique could have future applications for humans visiting Mars, an asteroid or the moon.

Jack Burns, director of CU-Boulder’s Lunar University Network for Astrophysics Research, or LUNAR, hopes it will not be long before the latter happens. Burns has long advocated for placing a radio telescope on the far side of the moon that would be able to pick up “faint whispers” from distant regions of space that would tell the tale of a time when the universe was quite young — 100 million years after the Big Bang — and the first stars and galaxies were being born.

“It would open up a time period in the universe that we are not able to explore with any other technique or technology,” said Burns, also a professor in CU-Boulder’s Department of Astrophysical and Planetary Sciences. “This would be an absolutely unique telescope that will allow us to address fundamental questions about the very early universe.” 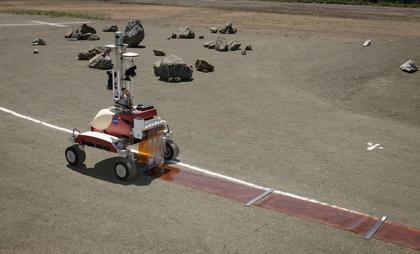 The K10 rover on NASA’s Roverscape in California. The robot has just been manipulated by an astronaut in space to roll out an antenna film that CU-Boulder researchers would like to deploy on the far side of the moon. Photo courtesy Jack Burns

Placing the radio telescope on the far side of the moon is critical because it would shield the receivers from the radio cacophony emanating from Earth and it would raise the telescope above Earth’s charged ionosphere, which can distort and refract incoming radio signals from space.

With the development of NASA’s Orion spacecraft, it will soon be feasible to send astronauts to a location 60,000 kilometers above the far side of the moon known as the L2 Earth-moon Lagrange point. At that spot, the combined gravity of the Earth and the moon would allow for the spacecraft to easily maintain a stationary orbit. From there, Burns and his colleagues believe a rover could be sent to the moon’s surface and manipulated to roll out a “Kapton film” that would contain the radio antennas.

To test their idea, the CU-Boulder researchers, including graduate student Laura Kruger, partnered with NASA’s Human Exploration Telerobotics project, which was already working on the technology that would allow robots on a planetary surface to be controlled from orbit. NASA agreed to use Burns’ vision as a test scenario. June’s successful trial, during which Cassidy piloted a K10 robot for three hours in an area the size of two football fields, is the first of three planned this summer.

The K10 robot is a four-wheel-drive rover that stands about 4-and-a-half-feet tall, weighs about 220 pounds and can travel about 3 feet per second — a little slower than the average person’s walking pace. For the Surface Telerobotics tests, K10 is equipped with multiple cameras and a 3D scanning laser system to perform survey work, as well as a mechanism to deploy the simulated radio antenna.

“During future missions beyond low-Earth orbit, some work will not be feasible for humans to do manually,” said Terry Fong, director of NASA’s Intelligent Robotics Group. “Robots will complement human explorers, allowing astronauts to perform work via remote control from a space station, spacecraft or other habitat.”

Burns hopes that the success of NASA’s Surface Telerobotics test will help bolster the far side of the moon telescope project and generate interest in exploring a mysterious region of our nearest celestial neighbor.

“The land area at the far side of the moon is twice as large as the United States; it’s a big piece of property,” Burns said. “We haven’t set foot there, either robotically or with humans, and it’s right in our backyard — just three days away.”