Palo Alto, CA — Scientists at the Carnegie Institution’s Department of Global Ecology have taken a new approach on examining a proposal to fix the warming planet. So-called geoengineering ideas—large-scale projects to change the Earth’s climate—have included erecting giant mirrors in space to reflect solar radiation, injecting aerosols of sulfate into the stratosphere making a global sunshade, and much more. Past modeling of the sulfate idea looked at how the stratospheric aerosols might affect Earth’s climate and chemistry.

The Carnegie researchers started out differently by asking how, if people decided what kind of climate they want, they would go about determining the aerosol distribution pattern that would come closest to achieving their climate goals. This new approach is the first attempt to determine the optimal way of achieving defined climate goals. The research is published in the September 16, 2010, issue of the Environmental Research Letters.

“We know that sulfate can cool the Earth because we have observed global temperature decreases following volcanic eruptions,” explained lead author George Ban-Weiss. “Past computer model simulations have shown that injecting sulfate uniformly into the stratosphere could reduce the surface temperature of the Earth, but the equator would be over cooled and the poles under cooled. You would also make the Earth drier, and decrease surface water runoff.”

The Carnegie scientists ran five simulations using a global climate model with different sulfate aerosol concentrations depending on latitude. They then used the results from these simulations in an optimization model to determine what distribution of sulfates would come closest to achieving specified climate goals. They then tested these distributions in the global climate model to assess how well the climate goals were met. 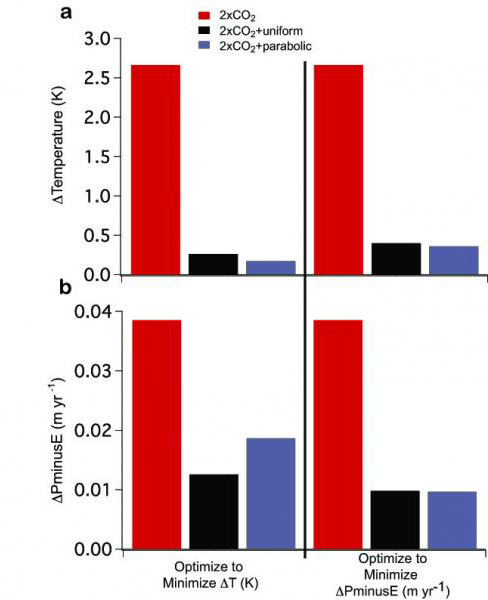 They found that with more sulfate over the poles than in tropical regions, the temperature distribution was more like that of a low carbon dioxide climate. However, changes in the water cycle were most effectively diminished when the sulfates were distributed nearly uniformly.

They found that if the right amount of uniformly distributed aerosols were put into the stratosphere, the magnitude of the temperature change could be diminished by 90% and the change in runoff by two-thirds. Under another scenario with aerosol distributions varying latitudinally as a parabola, the magnitude of temperature change was reduced by 94%, but then runoff changes were only reduced in half.

“Our optimization model worked well because the complex climate models indicate that much of the climate system operates as a very linear system. This is surprising when you hear all the talk of tipping points,” remarked co author Ken Caldeira. He continued, “Of course, this is just one model and it does not include all processes that are important in reality. Our results are illustrative and do not provide a sound basis for making policy decisions.”

The specific climate goals and metrics used were somewhat arbitrary. “The study was primarily aimed at developing a new methodology for looking at the climate problem,” said Caldeira.