On the Sizeable Wings of Albatrosses

An oceanographer may be offering the best explanation yet of one of the great mysteries of flight—how albatrosses fly such vast distances, even around the world, almost without flapping their wings. The answer, says Philip L. Richardson of the Woods Hole Oceanographic Institution (WHOI), lies in a concept called dynamic soaring, in which the large bird utilizes the power of above-ocean wind shear while tacking like an airborne sailboat.

“I have a simple model that explains the basic physics of what albatrosses do,” says Richardson, a scientist emeritus at WHOI, who, in addition to his primary career in studying ocean currents, has also piloted gliders. The key, he says, is the bird’s ability to balance the kinetic energy gained in soaring with the energy lost from drag.

In a paper published in the winter 2011 issue of the journal Progress in Oceanography, Richardson says that dynamic soaring using wind shear accounts for “80 to 90 percent of the total energy required for sustained soaring.”  He explains that above ocean waves, winds blow in layers—near the surface, air-sea friction slows lower-level winds while winds blow faster at higher levels. 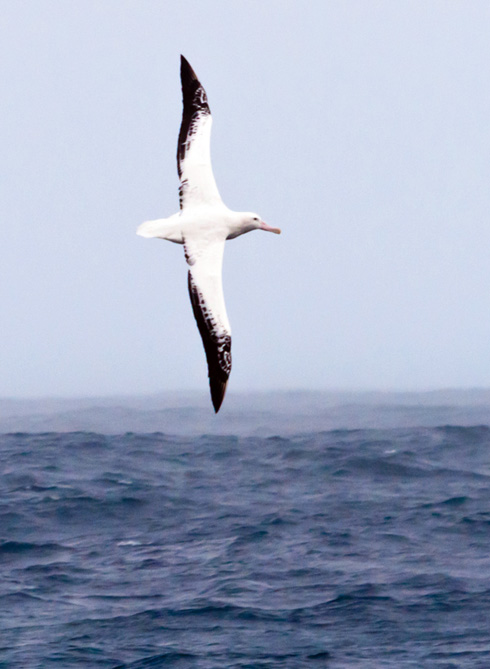 The wingspans of wandering albatrosses can reach 12 feet, but they rarely flap their wings. Instead they take advantage of winds and waves to remain aloft without expending energy. Image credit: Phil Richardson, Woods Hole Oceanographic Institution

As an albatross climbs from a wave trough, it is met by progressively faster winds that provide a burst of energy, increasing its speed significantly and carrying it as high as 10 to 15 meters.

Richardson was particularly intrigued by how the birds could be doing this while flying into the wind, something he had observed from a ship in the South Atlantic Ocean. “It’s been a mystery how they fly this way,” he said. 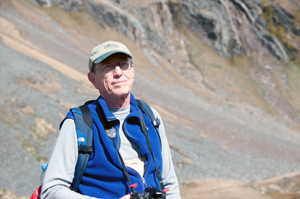 A pilot, sailor, and oceanographer, Phil Richardson studied the interactions of winds, waves, and albatrosses and constructed a new picture to explain the dynamics of albatross flight. Image credit: Heidi Richardson

Drawing on previous theories by Nobel laureate physicist Lord Rayleigh in 1883 and later by British scientist Colin Pennycuick, Richardson devised a model that accounts for the albatross’s dramatic, accelerating climbs and dives and elegant twists and turns, incorporating winds and waves.

It also explained the bird’s ability to seemingly fly upwind. To travel upwind, a sailor tacks into the wind. Richardson realized that albatrosses do the same thing. Using his model, he calculated that the bird tacks at about a 30-degree angle, “like a sailboat.” “They are using wind shear both ways,” he says. “To climb up and dive down.” Using the model, he estimates that it takes a minimum wind speed of about 7 knots for an albatross to soar.

In further describing this dynamic soaring, Richardson says what he has done is to refine previous models. While calculating that dynamic soaring accounts for the vast majority of energy for albatross flight, he says the remaining 10 to 20 percent comes from updrafts. “It’s a simple model that explains what albatrosses do,” he said. “It helps us understand how nature works.” 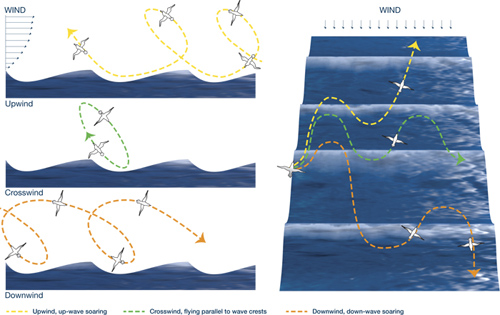 Albatrosses extract energy from winds to soar, as seen in these diagrammatic views from the side (left) and from overhead (right). Above a wave, winds blow progressively faster the higher you ascend. As albatrosses rise at an angle from a relatively windless wave trough, they cross a boundary into an area of brisk winds. They abruptly gain airspeed, giving them a burst of kinetic energy that allows them to climb to heights of 10 to 15 meters above the ocean. Then they bank downwind and swoop down into another wave trough, adding airspeed as they cross the boundary in reverse, and begin the cycle again. After the birds gain height, they can proceed in any of three directions. They can turn downwind, getting a boost from the tailwind (orange). They can swoop down into the same wave trough, flying parallel to the waves and perpendicular to the wind (green). Or, like a sailboat, they can tack to the right or left of the wind and head generally into the wind (yellow). Illustration by WHOI Graphic Services

Beyond that, Richardson suggests that understanding albatross flight might help increase the speeds of radio-controlled gliders, or some day enable fleets of such gliders to be dispatched to measure oceans, he said.