WASHINGTON — A change in the color of ocean waters could have a drastic effect on the prevalence of hurricanes, new research indicates. In a simulation of such a change in one region of the North Pacific, the study finds that hurricane formation decreases by 70 percent. That would be a big drop for a region that accounts for more than half the world’s reported hurricane-force winds.

It turns out that the formation of typhoons — as hurricanes are known in the region — is heavily mediatedby the presenceof chlorophyll, a green pigment that helps the tiny single-celled organisms known as phytoplankton convert sunlight into food for the rest of the marine ecosystem. Chlorophyll contributes to the ocean’s color.

“We think of the oceans as blue, but the oceans aren’t really blue, they’re actually a sort of greenish color,” said Anand Gnanadesikan, a researcher with the National Oceanic and Atmospheric Administration’s Geophysical Fluid Dynamics Laboratory in Princeton, New Jersey. “The fact that [the oceans] are not blue has a [direct] impacton the distribution of tropical cyclones.”

In the study, to be published in an upcoming issue of Geophysical Research Letters, a journal of the American Geophysical Union, Gnanadesikan’s team describes how a drop in chlorophyll concentration, and the corresponding reduction in ocean color, could cause a decrease in the formation of hurricanes in the color-depleted zone. Although the study looks at the effects of a simulated drop in the phytoplankton population (and therefore in the ocean’s green tint), recently-published research argued that global phytoplankton populations have been steadily declining over the last century. 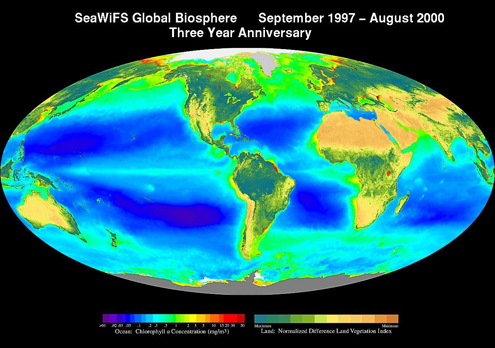 About the image: In the oceans, shades of blue indicate lower chlorophyll concentrations. Image credit: NASA

In the latter scenario, the absence of chlorophyll in the subtropical gyre affected hurricane formation by modifying air circulation and heat distribution patterns both within and beyond the gyre. In fact, along the equator, those new patterns outside the gyre led to an increase in hurricane formation of about 20 percent. Yet, this rise was more than made up for by the 70 percent decrease in storms further north, over and near the gyre. The model showed that more hurricanes would hit the Philippines and Vietnam, but fewer would make landfall in South China and Japan.

In the no-chlorophyll scenario, sunlight is able to penetrate deeper into the ocean, leaving the surface water cooler. The drop in the surface temperature in the model affects hurricane formation in three main ways: cold water provides less energy; air circulation patterns change, leading to more dry air aloft which makes it hard for hurricanes to grow.The changes in air circulation trigger strong winds aloft, which tend to prevent thunderstorms from developing the necessary superstructure that allows them to grow into hurricanes.

A decrease in hurricanes in the North Pacific is just one example of how changing chlorophyll concentrations can have far-reaching, previously unconsidered, effects. The specific outcomes over different patches of the ocean will vary based on local currents and ocean conditions, said Gnanadesikan.

A complete absence of chlorophyll in parts of the ocean would be a drastic change, Gnanadesikanadmits. Yet, its potential impact is still important to consider, he maintains. The northern Pacific gyre that he studied isalready the “biological desert of the ocean,” he said. So the surprise, then, is that “even in this region that is apparently clear, biologically-mediated heating is important.”

This research was primarily supported by NOAA, with additional support from the National Aeronautics and Space Administration.