In a unique and complex example of “science diplomacy,” teams of U.S. and Swedish scientists are sailing this month aboard two research vessels to study the ecology of the Amundsen Sea, one of the least-explored and most productive bodies in Antarctic waters, and to gauge the potential effects of a changing climate on the Southern Ocean.

The joint American and Swedish expedition, involving the U.S. icebreaking research vessel Nathaniel B. Palmer and the Swedish icebreaker Oden, was cooperatively planned and is being carried out by the National Science Foundation’s Office of Polar Programs and the Swedish Polar Research Secretariat (SPRS).

The research brings together a multidisciplinary group of scientists within a wide spectrum of scientific areas, including persistent pollutants and greenhouse gases, the ecology of invasive species, epidemiology among seals and microbial ecology, and the physics of sea ice and oceanography. 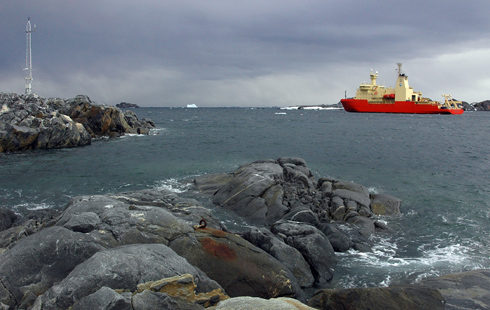 The cruise will give a unique opportunity to perform research in one of the least-studied areas of the Antarctic. Findings could have important implications for the future of the Antarctic marine ecosystem, as the number of polynyas in Antarctic waters can be expected to increase in a warming climate. Polynya, derived from a Russian word, means an area of open ocean surrounded by ice.

The Palmer sailed from Punta Arenas, Chile on Nov. 26 and the Oden left Punta Arenas on Dec. 8. The two vessels are expected to rendezvous in mid-December. Palmer’s primary work area will be in open waters along the Antarctic Peninsula and in the Amundsen Sea polynya, while the Oden researchers will focus on work in sea ice.

With Swedish and U.S. teams on both ships, the ASPIRE project (Amundsen Sea Polynya International Research Expedition) will use a state-of-the-art trace metal detection system to measure the total amount of iron, and the individual iron isotopes, in the Amundsen Sea. Iron is an important micronutrient for primary production in the Southern Ocean, and iron isotopes will help determine the sources of iron to the Amundsen, such as glaciers, sediment from the continent, or the prevailing oceanic currents.

As climate in West Antarctica changes, glaciers are receding, and the Antarctic Circumpolar Current is moving closer to the continent. The ASPIRE team will collect baseline information on nutrient and ecosystem processes as a starting point for examining how the climate affects this dynamic and productive region of the Southern Ocean.

The scientists also will deploy a remotely operated vehicle (ROV) across a large area of the Amundsen Sea polynya, to measure temperature, salinity, the amount and types of chlorophyll and the types and species of phytoplankton and zooplankton. These measurements will allow them to pinpoint the precise locations of phytoplankton blooms and how these relate to nutrient availability, sea-ice coverage, ocean currents and water-mass properties. Researchers will also collect water samples to study phytoplankton productivity, zooplankton ecology, and bacterial metabolism in the laboratory.

Oden also is carrying a helicopter that will be used for both navigation and science.

NSF, which manages the U.S. Antarctic Program, and the Swedish Polar Research Secretariat have for many years cooperatively operated Oden in Antarctic waters. The Oden is an extremely capable icebreaker that also serves as a platform for research in the polar regions. Oden has made several voyages to the Arctic and the North Pole.

For the past five years Oden has also sailed the southern latitudes in Antarctic waters for the joint US-Swedish Oden Southern Ocean program (OSO). The OSO research cooperation also enables an icebreaking mission in McMurdo Sound to support the U.S. Antarctic Program at McMurdo research station. This mission allows ships to enter and conduct the annual resupply and refueling of the station and removal of waste material to the United States.

“The ongoing Swedish and U.S. cooperation within  Antarctic research will reach a peak this season with the unique two-ship operation in the Southern Ocean. We look forward to further develop this fruitful partnership within the Polar Regions, ” said Björn Dahlbäck, SPRS director-general. “The joint scientific program and work onboard the icebreaker Oden has been a very successful annual activity since 2006, and now we are looking forward to this unique two-ship cruise in the Southern Ocean.”

The deployment of U.S. researchers and teachers aboard the Oden also was among the first U.S. NSF scientific expeditions of the International Polar Year 2007-2009.

“As was always intended, a number of long-lasting, international scientific partnerships have grown, and will continue to grow, out of the International Polar Year (IPY),” said Karl A. Erb, the director of NSF’s Office of Polar Programs. “Certainly IPY helped to strength our relationship with the Swedish Polar Research Secretariat. The ASPIRE research cruise is another important step in the evolution of the ‘science diplomacy’ between our two programs. It also furthers the NSF and IPY goals of combining research and education.”

Anne Marie Wotkyns, a teacher at J.B.Monlux Magnet Elementary School in North Hollywood, Calif., will be one of two teachers aboard the Oden during the cruise. She will be recording her experiences and sharing them online as part of the NSF-funded Polar Teachers and Researchers Exploring and Collaborating (PolarTREC) program. The Swedish teacher, Caroline Gennser at S:ta Ragnhildgymnasiet in Södertälje, will be working closely with the marine-zoology project, focusing on epidemic diseases in Antarctic seals, and will later bring her research experiences back to the classroom.

The U.S. portion of the ASPIRE project was funded under the American Recovery and Reinvestment Act of 2009. The OSO expeditions with Oden are funded and organized through a collaboration between NSF, the Swedish Polar Research Secretariat and the Swedish Research Council.