Fuel cells have been touted as a cleaner solution to tomorrow’s energy needs, with potential applications in everything from cars to computers.

But one reason fuel cells aren’t already more widespread is their lack of endurance. Over time, the catalysts used even in today’s state-of-the-art fuels cells break down, inhibiting the chemical reaction that converts fuel into electricity. In addition, current technology relies on small particles coated with the catalyst; however, the particles’ limited surface area means only a fraction of the catalyst is available at any given time.

Now a team of engineers at the Yale School of Engineering & Applied Science has created a new fuel cell catalyst system using nanowires made of a novel material that boosts long-term performance by 2.4 times compared to today’s technology. Their findings appear on the cover of the April issue of ACS Nano. 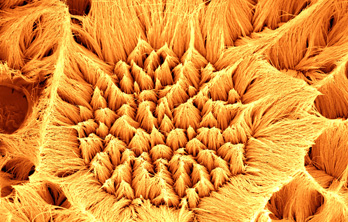 “In order to produce more efficient fuel cells, you want to increase the active surface area of the catalyst, and you want your catalyst to last,” Taylor said.

At 13 nanometers in scale (about 1/10,000 the width of a human hair), the BMG nanowires that Schroers and Taylor developed are about three times smaller than carbon black particles. The nanowires’ long, thin shape gives them much more active surface area per mass compared to carbon black. In addition, rather than sticking platinum particles onto a support material, the Yale team incorporated the platinum into the nanowire alloy itself, ensuring that it continues to react with the fuel over time.

It’s the nanowires’ unique chemical composition that makes it possible to shape them into such small rods using a hot-press method, said Schroers, who has developed other BMG alloys that can also be blow molded into complicated shapes. The BMG nanowires also conduct electricity better than carbon black and carbon nanotubes, and are less expensive to process.

So far Taylor has tested their catalyst system for alcohol-based fuel cells (including those that use ethanol and methanol as fuel sources), but they say the system could be used in other types of fuel cells and could one day be used in portable electronic devices such as laptop computers and cell phones as well as in remote sensors.

“This is the introduction of a new class of materials that can be used as electrocatalysts,” Taylor said. “It’s a real step toward making fuel cells commercially viable and, ultimately, supplementing or replacing batteries in electronic devices.”

Other authors of the paper include Marcelo Carmo, Ryan C. Sekol, Shiyan Ding and Golden Kumar (all of Yale University).