A chemical reaction reported by University of Delaware assistant professor Donald Watson and his laboratory group has set the chemistry world abuzz for its creativity and potential utility.

Watson and his team in the UD Department of Chemistry and Biochemistry have developed a chemical reaction that converts carbon-hydrogen bonds to carbon-silicon bonds using the metal palladium as a catalyst, yielding an important new tool for building molecules. The potential industrial applications are broad, ranging from the manufacture of medicines to plastics.

Watson presented the research on March 25 during the national meeting of the American Chemical Society (ACS) in San Diego. The work subsequently was highlighted in the April 2 issue of the ACS journal Chemical and Engineering News.

“It provides access to new compounds in a very useful, straightforward, economical fashion,” Watson says, noting that the chemical reaction, which turns bright green, currently takes from 6 to 24 hours to occur in the lab. 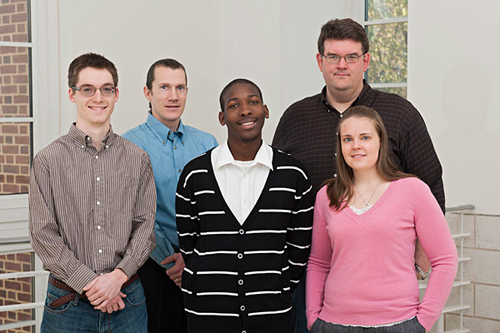 The research was inspired, Watson says, by the work of Richard F. Heck, the University’s Willis F. Harrington Professor Emeritus, who won the 2010 Nobel Prize in Chemistry alongside co-laureates Ei-ichi Negishi and Akira Suzuki for discoveries using the metal palladium as a catalyst to get carbon atoms, which don’t naturally cozy up, to link together.

“Silicon is one row below carbon on the Periodic Table, so we’re activating a way to move down the table,” Watson notes.

A major goal, says Watson, is to expand the chemist’s toolkit by developing new chemical reactions useful in making new molecules for areas ranging from agriculture to alternative energy. He credits doctoral students Jesse McAtee and Sara Martin for their primary contributions to this latest effort. Undergraduate students Derek Ahneman and Keywan Johnson also assisted with the research.

The team approached the task analytically, Watson says, examining the reports of Japanese scientists a few decades ago in the scientific literature, and re-examining the efficiency of the chemical reaction, which initially was described as “low-yield,” meaning it generated only a small amount of product.

While the chemical reaction reported by Japanese researchers in the early 1990s produced a chemical yield of 10 to 45 percent, the UD-adapted catalyst provides above a 95 percent yield.

To boost the yield, Watson and his team made a “hybrid” catalyst combining features of catalysts developed by Heck, as well more modern systems. In so doing, the researchers went from a catalyst that was “barely reactive” to one that is “spectacularly reactive,” Watson says.

He and his team are now digging into the details of the side reactions.

“We’re excited — we think there are a lot of things we can do with this, and we’re very actively continuing our explorations,” Watson says. “My students did a fantastic job — they really knocked this out of the park.”