Not All Cool Pavements Are Created Equal

Berkeley Lab finds that the choice of pavement material can significantly impact carbon emissions, creates decision tool for cities to use

Cool pavements can help keep cities cool, right? Yes, but according to new research from the Department of Energy’s Lawrence Berkeley National Laboratory (Berkeley Lab), many reflective pavements have some unexpected drawbacks relative to conventional pavements when considering the entire life cycle of the materials.

Scientists in Berkeley Lab’s Heat Island Group, in collaboration with the UC Pavement Research Center (UCPRC), the University of Southern California (USC), and thinkstep Inc., conducted life cycle assessments of conventional and cool pavements. Looking at the technologies over a span of 50 years, including manufacture, installation, use, and disposal/recycling, they found that the extra energy and emissions embodied in cool pavement materials usually exceed the expected energy and emissions savings from reduced space conditioning (cooling and heating) in buildings.

“This study provides an important perspective on the trade-offs of cool pavements and gives cities a tool to understand them for their particular setting,” said Berkeley Lab researcher Haley Gilbert. “I cannot go to a city and say, ‘Cool pavements are good,’ without letting them know that there could be negative environmental consequences from deployment.” 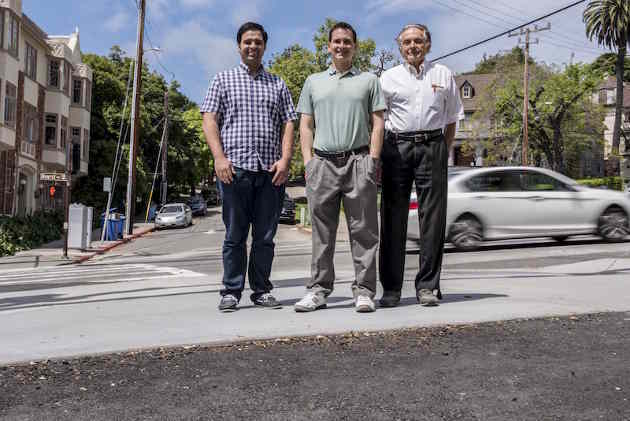 Reflective pavements have been considered as one of several strategies to mitigate what are known as urban heat islands, in which daytime temperatures rise due, in part, to dark, dry infrastructure such as roads and buildings. Other cooling strategies include urban trees, which provide shade, and reflective roofs and walls, which absorb less sunlight. The payoff for all three is the energy saved on air conditioning.

The research produced a decision-support tool that cities can download and use to estimate the energy and environmental consequences of various pavement types. The initial study was funded by the California Air Resources Board (CARB) and the California Department of Transportation (Caltrans), and a report was published last month.

The researchers then used the decision tool they created to conduct case studies in Los Angeles and Fresno. Their paper, “Energy and environmental consequences of a cool pavement campaign,” is published in the journal Energy and Buildings; Gilbert is the lead author, and co-authors include Pablo Rosado, Dev Millstein, and Ronnen Levinson of Berkeley Lab as well as collaborators from UCPRC, USC, and the New York City Mayor’s Office of Sustainability.

Key concepts that were not considered in this study include the economic and health effects of cool pavements, and potential emissions savings from vehicle-road interactions (for example, smoother roads may translate to small improvements in fuel efficiency).

How to cool cities in a warming climate

Pavements, including roads and parking lots, can cover one-third or more of a typical U.S. city, and previous studies have shown that cool pavements can reduce a city’s average outside air temperature by around 0.5 degrees Celsius, depending on the extent of deployment, city size, and city location. These air temperature reductions have also been projected to improve local air quality by reducing smog formation and ozone concentration.

Reducing the urban heat island effect is becoming increasingly important as cities prepare for future warming. However, researchers and cities want to identify the most effective cooling strategies, Gilbert said.

Asphalt vs. cement vs. coatings

By far the most common urban pavement material is asphalt concrete, which is dark, and has a low solar reflectance, or “albedo.” Cement concrete is lighter in color and has a higher albedo. However, the high-temperature process for making cement is more energy- and carbon-intensive than the production of asphalt from petroleum.

In addition to traditional asphalt concrete and cement concrete, the researchers also assessed several other material alternatives, such as reflective coatings and the use of industrial waste products like slag and fly ash, to replace some of the energy-intensive cement in cement concrete. UCPRC and thinkstep Inc. calculated the energy and emissions associated with pavement materials and construction. 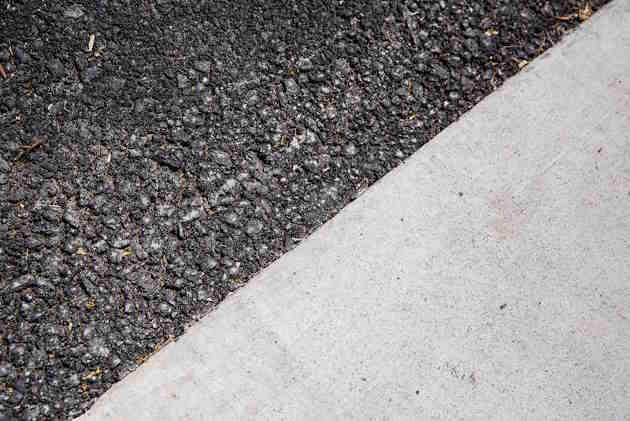 Asphalt (dark) and cement (light) side by side. Image credit: Berkeley Lab

The USC researchers applied a regional climate model to California, and Berkeley Lab ran simulations of building energy consumption. Pavement albedo affects buildings both directly, by reflecting more or less sunlight to nearby buildings, and indirectly, by changing the outside air temperature.

The researchers found that, in most cases, the extra energy embodied in the cool material was far greater than the energy savings from increasing the albedo. “Over the life cycle of the pavement, the pavement material matters substantially more than the pavement reflectance,” Levinson said.

He added, “I was surprised to find that over 50 years, maintaining a reflective coating would require over six times as much energy as a slurry seal. The slurry seal is only rock and asphalt, which requires little energy to produce, while the reflective coating contains energy-intensive polymer.”

These “bottom up” results from modeling were in line with a separate “top down” study by researcher Melvin Pomerantz, also in Berkeley Lab’s Heat Island Group. Using data on electricity supplied to an entire city by its power company on hot days and on mild days, Pomerantz calculated the maximum possible electrical energy savings and avoided carbon dioxide emissions in seven warm cities in California.

The result was an annual decrease in electricity usage of less than 1 kilowatt-hour per square meter of cooler pavement. This translated to monetary savings from energy conservation of less than 60 cents per year and avoided CO2 of less than 1 cent per year. If the annualized extra cost of making a square meter of cooler pavement is less than this, the pavement is cost-effective. His results were published recently in the journal Urban Climate under the title, “Are cooler surfaces a cost-effect mitigation of urban heat islands?”

“This particular analysis has not been done before,” Pomerantz said. “It’s important to know what does not work, as well as what does work. Not every city should have white pavements.”

“The one-time global cooling benefit of cool pavements is substantially larger than the 50-year life cycle carbon penalty or savings,” he said.

What’s more, as cities get warmer there may be benefits in both comfort and health that result from cooler pavements. This aspect was not part of the current research.

The study has also shown that technological innovation has a role to play. “The development of lower energy, lower carbon cool pavement solutions is still necessary,” Levinson said.