Whale sharks (Rhincodon typus)—which grow more than 30 feet long—are the largest fish in the world’s ocean, but little is known about their movements on a daily basis or over years. A newly discovered juvenile whale shark aggregation off Saudi Arabia is giving researchers a rare glimpse into the lives of these gentle giants.

Scientists from the Woods Hole Oceanographic Institution (WHOI) and colleagues from the King Abdullah University of Science and Technology (KAUST) and Massachusetts Division of Marine Fisheries report on the movements of whale sharks tagged at the site in a study published July 30, 2014, in the journal PLOS ONE.

During fieldwork in 2009, the research team found hundreds of juvenile whale sharks gathering on coral reefs near Al-Lith on the central coast of the Saudi Arabian Red Sea.

“The fact that there were so many whale sharks in such a small area gave us an opportunity to begin an unprecedented study to answer some of the basic questions,” said Simon Thorrold, a biologist at WHOI and coauthor of the paper. “The discovery of the site provides a window into the movements and ecology of the species in a region that we were not necessarily expecting to see them in such high numbers.” 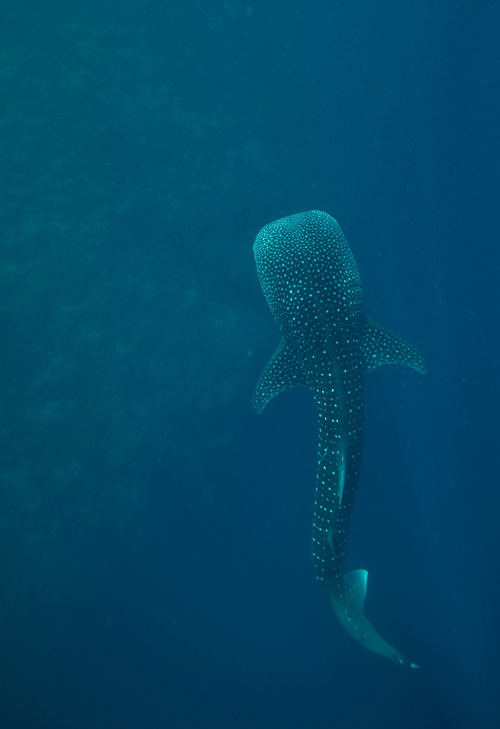 Whale sharks (Rhincodon typus), which grow more than 30 feet long, are the largest fish in the world’s ocean. Little is known about their movements on a daily basis or over years. (Photo by Simon Thorrold, Woods Hole Oceanographic Institution)

The research team utilized three types of satellite transmitting tags to track the movements of 47 whale sharks from 2009 through 2011. The tags, which are placed just below the dorsal fins, measure temperature, depth, and light levels of the waters the fish swim in.  After several months, the tags pop off, float to the surface and beam data via the ARGO satellite system back to computers on shore.

Most of the sharks remained in the southern Red Sea throughout the time the tags were on. Some of the tagged individuals headed into the Indian Ocean, which may have been motivated by an abundant food supply related to seasonal upwelling. Whale shark diets vary both seasonally and geographically, but they are thought to feed mainly on zooplankton as well as algae, small fishes, fish eggs, and cephalopods. 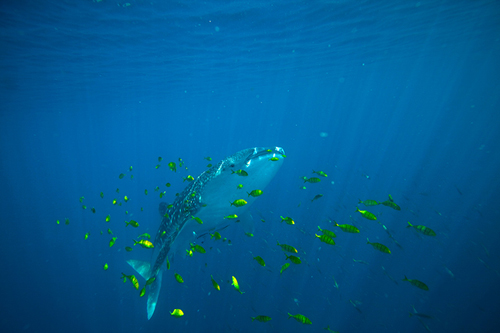 During fieldwork in 2009, the research team found hundreds of juvenile whale sharks gathering on coral reefs near Al-Lith on the central coast of the Saudi Arabian Red Sea. (Photo by Simon Thorrold, Woods Hole Oceanographic Institution)

“Interestingly, while some individuals that we tagged left the Red Sea and headed into the Indian Ocean, most remained relatively close to where they were tagged, suggesting that the area represents a critical juvenile habitat for this population,” Thorrold added.

Adult whale sharks were not seen at the site, which may serve as a “staging ground” for juveniles before they move on to regional aggregations of larger sharks. To date, 12 whale shark aggregation sites have been identified globally.

“While all other juvenile whale shark aggregations are dominated by males, we found a sex ratio of 1:1 at the site in the Red Sea. The presence of so many female juvenile sharks may be of considerable significance to the global whale shark populations,” Thorrold said.

Whale sharks were listed as “vulnerable” by the International Union for Conservation of Nature in 2000. Like other sharks and large rays, whale sharks likely have small litters of pups and are slow to reach sexual maturity.

The study highlights the need for more research on whale sharks as well as a multinational, cooperative effort to conserve populations in both the Red Sea and Indian Ocean.

“Our research on whale sharks in the Red Sea clearly shows that much remains to be learned about the species,” said co-author Greg Skomal, a Massachusetts Division of Marine Fisheries biologist and WHOI adjunct scientist. “This newly discovered aggregation off Saudi Arabia likely plays an integral role in the natural history of this species in this region and, perhaps, well beyond.”

“Eventually this work will tell us about where whales sharks are spending their time throughout their lives, where they’re feeding, where they’re breeding and where they’re giving birth,” added Thorrold. “Knowing where they go at different times of the year is critical to designing effective conservation strategies for the species.”

Funding for this work was provided in part by KAUST baseline research funds and the U.S. National Science Foundation.