By measuring how fast Earth conducts electricity and seismic waves, a University of Utah researcher and colleagues made a detailed picture of Mount Rainier’s deep volcanic plumbing and partly molten rock that will erupt again someday.

“This is the most direct image yet capturing the melting process that feeds magma into a crustal reservoir that eventually is tapped for eruptions,” says geophysicist Phil Wannamaker, of the university’s Energy & Geoscience Institute and Department of Civil and Environmental Engineering. “But it does not provide any information on the timing of future eruptions from Mount Rainier or other Cascade Range volcanoes.”

The study was published today in the journal Nature by Wannamaker and geophysicists from the Woods Hole Oceanographic Institution in Massachusetts, the College of New Jersey and the University of Bergen, Norway.

This image was made by measuring how the ground conducts or resists electricity in a study co-authored by geophysicist Phil Wannamaker of the University of Utah Energy & Geoscience Institute. It shows the underground plumbing system that provides molten and partly molten rock to the magma chamber beneath the Mount Rainier volcano in Washington state. The scale at left is miles depth. The scale at bottom is miles from the Pacific Coast. The Juan de Fuca plate of Earth’s Pacific seafloor crust and upper mantle is shown in blue on the left half of the image as it dives or “subducts” eastward beneath Washington state. The reddish orange and yellow colors represent molten and partly molten rock forming atop the Juan de Fuca plate or “slab.” The image shows the rock begins to melt about 50 miles beneath Mount Rainier (the red triangle at top). Some is pulled downward and eastward as the slab keeps diving, but other melts move upward to the orange magma chamber shown under but west of Mount Rainier. The line of sensors used to make this image were placed north of the 14,410-foot peak, so the image may be showing a lobe of the magma chamber that extends northwest of the mountain. Red ovals on the left half of the page are the hypocenters of earthquakes. Photo Credit: R Shane McGary, Woods Hole Oceanographic Institution (Click image to enlarge)

In an odd twist, the image appears to show that at least part of Mount Rainier’s partly molten magma reservoir is located about 6 to 10 miles northwest of the 14,410-foot volcano, which is 30 to 45 miles southeast of the Seattle-Tacoma area.

But that could be because the 80 electrical sensors used for the experiment were placed in a 190-mile-long, west-to-east line about 12 miles north of Rainier. So the main part of the magma chamber could be directly under the peak, but with a lobe extending northwest under the line of detectors, Wannamaker says.

The top of the magma reservoir in the image is 5 miles underground and “appears to be 5 to 10 miles thick, and 5 to 10 miles wide in east-west extent,” he says. “We can’t really describe the north-south extent because it’s a slice view.”

Wannamaker estimates the reservoir is roughly 30 percent molten. Magma chambers are like a sponge of hot, soft rock containing pockets of molten rock.

The new image doesn’t reveal the plumbing tying Mount Rainier to the magma chamber 5 miles below it. Instead, it shows water and partly molten and molten rock are generated 50 miles underground where one of Earth’s seafloor crustal plates or slabs is “subducting” or diving eastward and downward beneath the North America plate, and how and where those melts rise to Rainier’s magma chamber.

The study was funded largely by the National Science Foundation’s Earthscope program, which also has made underground images of the United States using seismic or sound-wave tomography, much like CT scans show the body’s interior using X-rays.

The new study used both seismic imaging and magnetotelluric measurements, which make images by showing how electrical and magnetic fields in the ground vary due to differences in how much underground rock and fluids conduct or resist electricity.

Wannamaker says it is the most detailed cross-section view yet under a Cascades volcanic system using electrical and seismic imaging. Earlier seismic images indicated water and partly molten rock atop the diving slab. The new image shows melting “from the surface of the slab to the upper crust, where partly molten magma accumulates before erupting,” he adds.

Wannamaker and Rob L. Evans, of the Woods Hole Oceanographic Institution, conceived the study. First author R Shane McGary – then at Woods Hole and now at the College of New Jersey – did the data analysis. Other co-authors were Jimmy Elsenbeck of Woods Hole and Stéphane Rondenay of the University of Bergen. 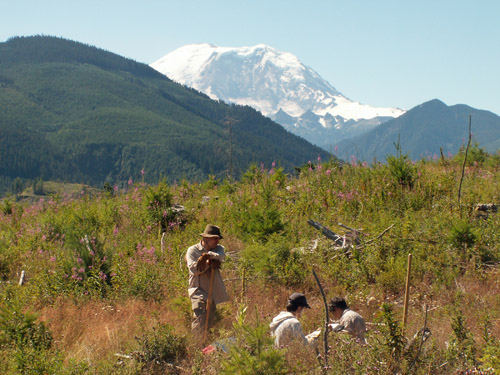 Researchers install sensors that measure the Earth’s electrical conductivity or resistivity at a site northeast of Washington state’s Mount Rainier, the tallest volcano in the Cascade Range at 14,410 feet. Geophysicist Phil Wannamaker, of the University of Utah’s Energy & Geoscience Institute, co-authored a study in the July 17 issue of Nature providing the most detailed look yet at the volcanic plumbing system that supplies molten rock to a magma chamber beneath the volcano. Photo Credit: Phil Wannamaker, University of Utah Energy & Geoscience Institute

Mount Rainier, the tallest peak in the Cascades, “is an active volcano that will erupt again,” says the U.S. Geological Survey. Rainier sits atop volcanic flows up to 36 million years old. An ancestral Rainier existed 2 million to 1 million years ago. Frequent eruptions built the mountain’s modern edifice during the past 500,000 years. During the past 11,000 years, Rainier erupted explosively dozens of times, spewing ash and pumice. 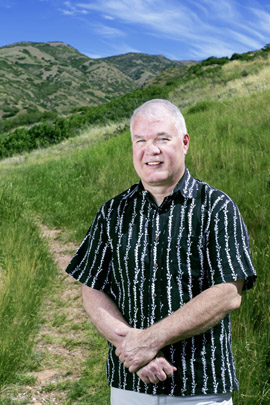 Geophysicist Phil Wannamaker, of the Energy & Geoscience Institute at the University of Utah, stands in the foothills above the campus. Wannamaker conceived and co-authored a new study providing the clearest look yet at the underground system that generates molten rock where two of Earth’s tectonic plates collide, then sends it upward to the magma chamber beneath 14,410-foot Mount Rainier, the tallest volcano in the Cascade Range and in Washington state. Photo Credit: Nick Steffens, University of Utah Marketing and Communications

Rainier once was taller until it collapsed during an eruption 5,600 years ago to form a large crater open to the northeast, much like the crater formed by Mount St. Helens’ 1980 eruption. The 5,600-year-old eruption sent a huge mudflow west to Puget Sound, covering parts or all of the present sites of the Port of Tacoma, Seattle suburbs Kent and Auburn, and the towns Puyallup, Orting, Buckley, Sumner and Enumclaw.

Rainier’s last lava flows were 2,200 years ago, the last flows of hot rock and ash were 1,100 years ago and the last big mudflow 500 years ago. There are disputed reports of steam eruptions in the 1800s.

Subduction Made Simple – and a Peek beneath a Peak

The “ring of fire” is a zone of active volcanoes and frequent earthquake activity surrounding the Pacific Ocean. It exists where Earth’s tectonic plates collide – specifically, plates that make up the seafloor converge with plates that carry continents.

From Cape Mendocino in northern California and north past Oregon, Washington state and into British Columbia, an oceanic plate is being pushed eastward and downward – a process called subduction – beneath the North American plate. This relatively small Juan de Fuca plate is located between the huge Pacific plate and the Pacific Northwest.

New seafloor rock – rich with water in cracks and minerals – emerges from an undersea volcanic ridge some 250 miles off the coast, from northern California into British Columbia. That seafloor adds to the western edge of the Juan de Fuca plate and pushes it east-northeast under the Pacific Northwest, as far as Idaho.

When the leading, eastern edge of the diving slab descends deep enough, where pressures and temperatures are high, water-bearing minerals such as chlorite and amphibole release water from the slab, and the slab and surrounding mantle rock begin to melt. That is why the Cascade Range of active volcanoes extends north-to-south – above the slab and parallel but about 120 miles inland from the coast – from British Columbia south to Mount Shasta and Lassen Peak in northern California.

In the new image, yellow-orange-red areas correspond to higher electrical conductivity (or lower resistivity) in places where fluids and melts are located.

The underground image produced by the new study shows where water and molten rock accumulate atop the descending slab, and the route they take to the magma chamber that feeds eruptions of Mount Rainier:

– The rock begins to melt atop the slab about 50 miles beneath Mount Rainier. Wannamaker says it is best described as partly molten rock that contains about 2 percent water and “is a mush of crystals within an interlacing a network of molten rock.”

– Some water and partly molten rock actually gets dragged downward atop the descending slab, to depths of 70 miles or more.

– Other partly molten rock rises up through the upper mantle wedge, crosses into the crust at a depth of about 25 miles, and then rises into Rainier’s magma chamber – or at least the lobe of the chamber that crosses under the line of sensors used in the study. Evidence suggests the magma moves upward at least 0.4 inches per year. 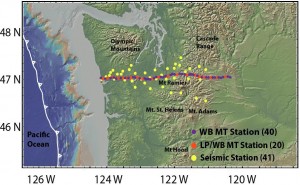 This map shows, in purple and pink, the west-east line of magnetotelluric sensors that were placed north of Washington state’s Mount Rainier to study the volcanic plumbing system under the volcano. The sensors detect how the ground resists or conducts natural electricity within the Earth. Shown in yellow are seismic sensors that detect how fast or slow sound or seismic waves travel underground. Both methods were used in a new study that provides the most detailed look yet at the subterranean plumbing system that supplies the active volcano. Photo Credit: R Shane McGary, Woods Hole Oceanographic Institution (Click image to enlarge)

The new magnetotelluric image also shows a shallower zone of fluid perhaps 60 miles west of Rainier and 25 miles deep at the crust-mantle boundary. Wannamaker says it is largely water released from minerals as the slab is squeezed and heated as it dives.

The Energy & Geoscience Institute at the University of Utah employs more than 100 scientists and staff, and conducts the world’s largest, university-based, cost-shared research program focusing on oil, gas and geothermal exploration and production. The institute perhaps is known best for its international hydrocarbon research consortium sponsored by more than 70 global energy corporations. Wannamaker does research worldwide as a principal investigator in the institute’s geothermal group.