Stanford, CA — Plant roots are fascinating plant organs – they not only anchor the plant, but are also the world’s most efficient mining companies. Roots live in darkness and direct the activities of the other organs, as well as interact with the surrounding environment. Charles Darwin posited in The Power of Movement of Plants that the root system acts as a plant’s brain.

Due to the difficulty of accessing root tissue in intact live plants, research of these hidden parts has always lagged behind research on the more visible parts of plants. But now: a new technology–developed jointly by Carnegie and Stanford University–could revolutionize root research. The findings will be published in the large-scale biology section of the December issue of The Plant Cell. 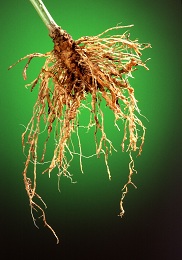 Understanding roots is crucial to the study of plant physiology because they serve as the interface between a plant and the soil–being solely responsible for taking up water and essential mineral nutrients. Roots must respond quickly to various environmental conditions such as water availability (for example, when being soaked by rain after a period of drought). They must find and exploit nutrients; they must respond to salinization and acidification of the soil; and they must integrate diverse signals such as light and gravity. All of these aspects are very difficult to analyze because of a root’s inaccessibility in the soil.

The research team’s efforts could revolutionize the entire field of root studies. The team is comprised of a group of plant scientists, including the paper’s lead author, Guido Grossmann, along with his Carnegie colleagues (Woei-Jiun Guo, David Ehrhardt and Wolf Frommer) and a group of chemical engineers from Stanford University and the Howard Hughes Medical Institute, (Rene Sit, Stephen Quake and Matthias Meier).

The new technology, called the RootChip, allowed the research team to study roots of eight individual seedlings at the same time, and to alter their growth environment simultaneously or independently and with extraordinary precision. Optical sensors, developed and inserted into the root tissue by Frommer’s team, allowed the researchers to examine how the roots responded to changes in nutrient supply levels in real time.

“This new tool provides a major advance for studying root biology at the cellular and subcellular level,” said Wolf Frommer, director of Carnegie’s plant biology department. “The growth conditions can be freely varied over several days, allowing us to monitor actual growth and development of roots and root hairs and using our optical biosensors to study nutrient acquisition and carbon sequestration in real time.”

The RootChip was capable of monitoring a root’s response to changing levels of the sugar glucose in the surrounding environment. Root growth slowed down when the leaves were not exposed to light, as predicted, because the leaf’s photosynthesis is required to supply the energy for root growth. The RootChip also revealed the long-suspected fact that galactose, a sugar highly similar to glucose, is toxic to roots and inhibits their growth and function.

The RootChip is a generic tool and can be altered to test any aspect of root physiology that can be analyzed visually. It can easily be modified to study more than 30 seedlings at the same time and can be expanded for use with plants used to make biofuels, such as Brachypodium and foxtail millet.