New technique can show links between prey and microplastics

A brand new method has been developed by scientists at Plymouth Marine Laboratory (PML) and the University of Exeter, in collaboration with Abertay University and Greenpeace Research Laboratories, to investigate links between top predator diets and the amount of microplastic they consume through their prey, offering potential insights into the exposure of animals in the ocean and on land to microplastics.

With an estimated 9.6-25.4 million tonnes of plastic estimated to enter the sea annually by 2025, and microplastics in particular being found on the highest mountains and deepest seas, new techniques are needed to trace, investigate and analyse this growing concern. 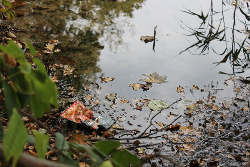 The development of this new non-invasive method was funded by the Natural Environment Research Council (NERC). It combines two existing techniques to analyse wild grey seal (Halichoerus grypus) scats (faeces), for prey species in the seals’ diet and the presence of microplastics. The scat samples were collected by staff of the Wildlife Trust of South and West Wales (Edward Stubbings, Birgitta Bueche, Sarah Purdon, Sarah Parmor, Sylwia Zbijewska and Nathan Wilkie).

The first part of the method uses metabarcoding, a molecular technique that assesses the DNA present in the scat to identify which prey species have been eaten by the seal. The second part then isolates the microplastics, allowing researchers to assess the quantity of the microplastics and record characteristics, such as shape and colour, which generates a better understanding of their sources.

By looking at both of these factors together, the method allows scientists to see whether there are links between the levels of microplastic exposure in these top predator species and whether this is related to the type of prey they are eating. This is particularly useful because top predators, such as seals, tend to consume microplastics through trophic transfer; that is, by eating prey that have already consumed microplastics themselves, which passes to the predator.

In organisms lower down the food chain, microplastics can cause effects including intestinal damage, energy depletion and reduced reproduction, and can act as a carrier for harmful chemical contaminants. By understanding top predator diets, scientists can examine disruptions to these food web interactions and potential threats to species and habitats. The method could be used to investigate where the microplastics are coming from, how they are travelling through the ecosystem and where they are ending up, helping researchers to study their fate and effects.

This new technique is not just applicable to top predators in the marine environment. Because the method relies on collected scat, it could be applied to predators in freshwater ecosystems or on land
as well, helping to build our understanding of the ways that microplastics are impacting every environment on Earth.

Lead author, Dr Sarah Nelms, who completed her PhD with Plymouth Marine Laboratory and the University of Exeter, said: “Trophic transfer is an indirect, but potentially major, route of microplastic ingestion for top predators. Accessing information on their diet is crucial if we are to understand the extent to which these important animals are exposed to plastic pollution. We hope our new method can unlock this, as yet, understudied area of microplastics research.”

Dr Penelope Lindeque, Head of the Marine Plastics Research group at Plymouth Marine Laboratory, said: “Metabarcoding (the use of a DNA region, called a barcode, to identify the taxa within a sample) is a powerful technique which can used to determine what an animal has eaten by looking at the DNA of the ingested prey in the scat of the predator. This paper has, for the first time, further developed this powerful technology to identify not only what prey a predator has eaten, but also what small pieces of plastic. Unfortunately, as microplastics are now so prevalent in our environment, such novel techniques are needed to help determine the impact of the microplastics and ultimately influence their prevention.”

The paper ‘What goes in, must come out: combining scat-based molecular diet analysis and quantification of ingested microplastics in a marine top predator’ is published this week in Methods in Ecology and Evolution.