The U.S. was one of the fastest-growing wind power markets in the world in 2009, second only to China, according to a report released today by the U.S. Department of Energy and prepared by Lawrence Berkeley National Laboratory.

Wind power additions in the United States set a new record in 2009, with 10 gigawatts of new capacity installed, representing a $21 billion investment. “At this pace, wind power is on a path to becoming a significant contributor to the U.S. power mix,” says co-author Ryan Wiser, a scientist in Berkeley Lab’s Environmental Energy Technologies Division (EETD). “Wind power projects accounted for 39 percent of all new electric generating capacity added in the U.S. in 2009, and wind energy is now able to deliver 2.5 percent of the nation’s electricity supply.”

The 2009 edition of the “Wind Technologies Market Report” provides a comprehensive overview of developments in the rapidly evolving U.S. wind power market. The need for an annual report of this type has grown as the wind power industry has entered an era of unprecedented expansion, both globally and in the United States.

At the same time, as the report documents, the past year has been one of upheaval. The global financial crisis and lower wholesale electricity prices have negatively impacted the near-term growth prospects for the wind power industry, while new federal policies are pushing the industry towards continued aggressive expansion.

“With the market evolving at such a rapid pace, keeping up with the latest developments has become increasingly difficult,” says co-author Mark Bolinger of EETD. “Yet, the need for timely, objective information on the industry and its progress has never been greater…this report seeks to fill this need.” 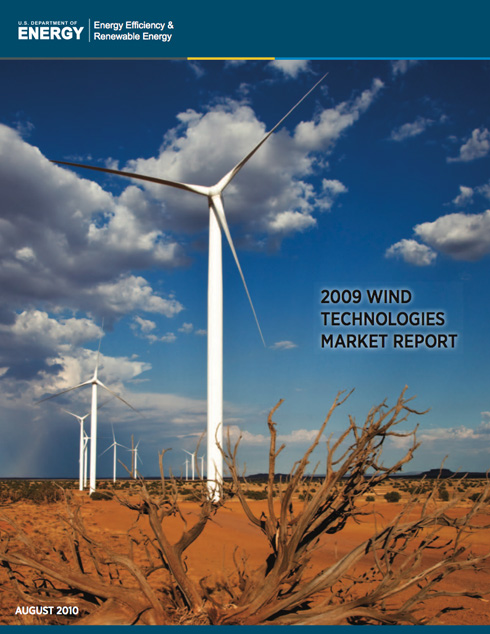 For the first time, the report presents estimates of the proportion of U.S. wind turbine equipment costs that have derived from imports from other countries, finding that a growing percentage of equipment is being manufactured domestically. “The overall fraction of wind turbine equipment manufactured domestically grew from 50 percent in 2008 to roughly 60 percent in 2009,” notes Wiser.Some of the key findings from the just-released 2009 edition include:

Berkeley Lab’s contributions to this report were funded by the Wind & Water Power Program, Office of Energy Efficiency and Renewable Energy of the U.S. Department of Energy.