A new look inside 2,000-year-old concrete – made from volcanic ash, lime (the product of baked limestone), and seawater – has provided new clues to the evolving chemistry and mineral cements that allow ancient harbor structures to withstand the test of time. The research has also inspired a hunt for the original recipe so that modern concrete manufacturers can do as the Romans did.

A team of researchers working at the Department of Energy’s Lawrence Berkeley National Laboratory (Berkeley Lab) used X-rays to study samples of Roman concrete – from an ancient pier and breakwater sites – at microscopic scales to learn more about the makeup of their mineral cements.

The team’s earlier work at Berkeley Lab’s Advanced Light Source (ALS), an X-ray research center known as a synchrotron, found that crystals of aluminous tobermorite, a layered mineral, played a key role in strengthening the concrete as they grew in relict lime particles. The new study, published in American Mineralogist, is helping researchers to piece together how and where this mineral formed during the long history of the concrete structures.

The work ultimately could lead to a wider adoption of concrete manufacturing techniques with less environmental impact than modern Portland cement manufacturing processes, which require high-temperature kilns. These are a significant contributor to industrial carbon dioxide emissions, which add to the buildup of greenhouse gases in Earth’s atmosphere.

Also, researchers suggest that a reformulated recipe for Roman concrete could be tested for applications such as seawalls and other ocean-facing structures, and may be useful for safeguarding hazardous wastes.

“At the ALS we map the mineral cement microstructures,” said Marie Jackson, a geology and geophysics research professor at the University of Utah who led the study. “We can identify the various minerals and the intriguingly complex sequences of crystallization at the micron scale.” 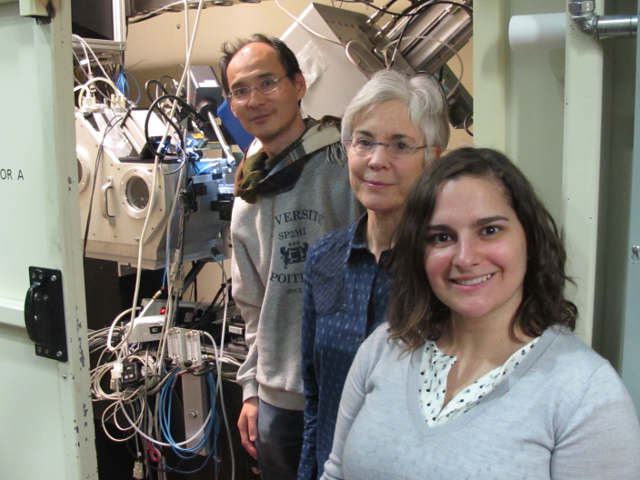 Jackson said that lime (also known as calcium oxide, or CaO) – exposed to seawater in the Roman concrete mixture – probably thoroughly reacted with volcanic ash early in the history of the massive harbor structures. Previous studies showed how the aluminous tobermorite crystallized in the lime remnants during a period of elevated temperature.

The new findings suggest that after the lime was consumed via these pozzolanic chemical reactions (so named for the volcanic ash found in the Pozzuoli, or Naples, region of Italy), a new period of mineral growth began.

The new growth of aluminous tobermorite is often associated with crystals of phillipsite, another mineral. The minerals form fine fibers and plates that make the concrete more resilient and less susceptible to fracture over time. They may explain an ancient observation by the Roman scientist Pliny the Elder, who opined that the concrete, “as soon as it comes into contact with the waves of the sea and is submerged, becomes a single stone mass, impregnable to the waves and every day stronger.”

In fact, the Romans relied on the reaction of a volcanic rock mixture with seawater to produce the new mineral cements. In rare instances, underwater volcanoes, such as the Surtsey Volcano in Iceland, produce the same minerals found in Roman concrete.

“Contrary to the principles of modern cement-based concrete,” Jackson said, “the Romans created a rock-like concrete that thrives in open chemical exchange with seawater.” 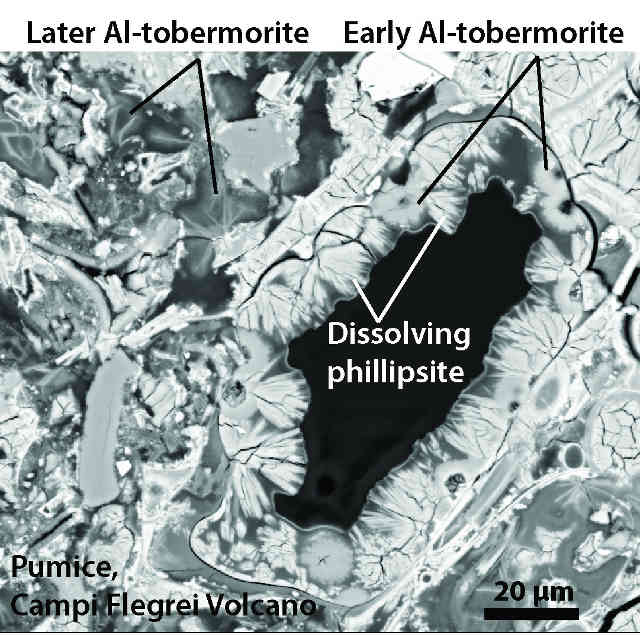 This image, from a scanning electron microscope, shows formations of aluminous tobermite crystals in a volcanic ash sample from the Campi Flegrei Volcano in Italy. X-ray experiments at Berkeley Lab’s Advanced Light Source have helped researchers to understand how these crystals develop over time to strengthen ancient Roman concrete structures. The scale bar at lower right represents 20 microns, or 20 millionths of a meter. (Image credit: University of Utah)

The ancient Roman recipe is very different than the modern one for concrete, Jackson noted. Most modern concrete is a mix of Portland cement – limestone, sandstone, ash, chalk, iron, and clay, among other ingredients, heated to form a glassy material that is finely ground – mixed with so-called “aggregates.” These are materials such as sand or crushed stone that are not intended to chemically react. If reactions do occur in these aggregates, they can cause unwanted expansions in the concrete.

To understand the long-term chemical processes that occurred in the Roman structures, researchers viewed thin, polished slices of the concrete with an electron microscope in Germany to map the distribution of elements in the mineral microstructures.

They coupled these analyses with a technique at Berkeley Lab’s ALS known as X-ray microdiffraction, and a technique at UC Berkeley known as Raman spectroscopy, to learn more about the structure of crystals in the samples.

Nobumichi Tamura, an ALS staff scientist, said the X-ray beamline where the Roman concrete samples were studied can produce beams focused to about 1 micron, or 1 thousandth of an inch, “which is useful for identifying each mineral species and mapping their distribution.” The beam is almost a hundred times smaller than more conventional laboratory X-rays. The microdiffraction technique measures an average signal from many tiny mineral grains, providing high resolution and fast data collection.

Jackson added, “We can go into the tiny natural laboratories in the concrete, map the minerals that are present, the succession of the crystals that occur, and their crystallographic properties. It’s been astounding what we’ve been able to find.”

She added, “This is a concrete that apparently grows aluminous tobermorite mineral cements over millennia.” The study suggests that this process could be useful for modern seawall structures, she said, as well as for encasing high-level wastes in cement-like barriers that protect the surrounding environment.

Jackson is working with a geological engineer to rediscover the Romans’ complex recipe for concrete. She is mixing seawater from the San Francisco Bay and volcanic rock from the Western United States to find the right formula, and is also leading a scientific drilling project to study the production of tobermorite and other related minerals at the Surtsey volcano in Iceland.

Already, a growing number of concrete manufacturers are exploring the use of volcanic rock and less energy-intensive processes, Jackson said, which could be a win-win for industry and the environment.

The concrete industry is big in the U.S., with sales valued at about $50 billion in 2015. The nation’s production of Portland cement – the most commonly produced cement type – amounted to about 80.4 million tons in 2015, according to the U.S. Geological Survey, or roughly the weight of 90 Golden Gate Bridges or 12 Hoover Dams.

In order for Roman concrete recipes to gain more traction, Jackson said, test structures will be needed to evaluate the long-term properties of marine structures built with volcanic rock and measure how they stack up against the properties of steel-reinforced concrete, for example.

“I think people don’t really know how to think about a material that doesn’t have steel reinforcement,” she said.