Researchers at North Carolina State University have developed a simple, effective and relatively inexpensive technique for removing lignin from the plant material used to make biofuels, which may drive down the cost of biofuel production.

Lignin, nature’s way of protecting plant cell walls, is difficult to break down or remove from plant materials called “biomass,” such as the non-edible parts of the corn plant. However, that lignin needs to be extracted in order to reach the energy-rich cellulose that is used to make biofuels.

“Finding inexpensive ways to remove lignin is one of the largest barriers to producing cost-effective biofuels,” says Ezinne Achinivu, a Ph.D. student in chemical and biomolecular engineering at NC State and lead author of a study describing the new technique. “And our approach is very promising.” 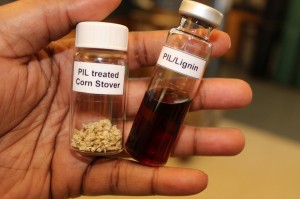 The new process dissolves lignin into the PIL, leaving cellulose behind as a solid. Photo credit: Ezinne Achinivu (Click image to enlarge)

The researchers began by making a number of liquid salts called “protic ionic liquids” or PILs. These PILs are fairly inexpensive to prepare, because they are made by mixing together an acid, such as acetic acid (more commonly known as vinegar), and a base (a chemical class of materials called amines). As part of the pretreatment process, one of the PILs is mixed with biomass and then heated and stirred. The lignin dissolves into the PIL, leaving the cellulose behind as a solid. The cellulose, which is now much easier to process, is then easily filtered from the mixture for use in the next biofuel production steps.

The remaining PIL-lignin liquid mixture can then be heated to distill (or vaporize) the PIL, leaving the lignin behind as a black powder. The vapors from the PIL are collected and cooled to recover the liquid PIL so that it can be re-used. The lignin is also valuable, because it can be used to manufacture polymers or other chemical products which could supplement the cost of running the biofuel production facility.

“This PIL-based technique can be easily scaled up and is likely to be both more energy efficient and less expensive than existing biomass pretreatment techniques for removing lignin,” Achinivu says.

The researchers are currently working to apply the technique to wood and other biomass feedstock materials, as well as to better understand and fine-tune the interactions between the PILs and lignin. “If we can better understand how the PIL dissolves the lignin, we can make the process even more efficient by using less energy while extracting more lignin,” Achinivu says.

The paper, “Lignin Extraction from Biomass with Protic Ionic Liquids,” is published online in the journal Green Chemistry. The work was conducted by the research group of senior author Dr. Wesley Henderson, associate professor of chemical and biomolecular engineering at NC State. The paper was co-authored by several other researchers at NC State, including undergraduate student Reagan Howard, graduate student Guoqing Li, and Dr. Hanna Gracz, research associate professor of biochemistry. The research was supported by the U.S. Air Force Office of Scientific Research under grant number FA9550-08-1-0185.