Though many animals can move with more precision and accuracy than our best-engineered aircraft and technologies, gyroscopes are rarely found in nature. Scientists know of just one group of insects, the group including flies, that has something that behaves like a gyroscope — sensors called halteres, clublike structures that evolved from wings.

Halteres provide information about the rotation of the body during flight, which helps flies perform aerial acrobatics and maintain stability and direction. But how do other insects without these sensors regulate flight dynamics, biologists have wondered?

University of Washington research suggests that insects’ wings may also serve a gyroscopic function — a discovery that sheds new insight on natural flight and could help with developing new sensory systems in engineering. 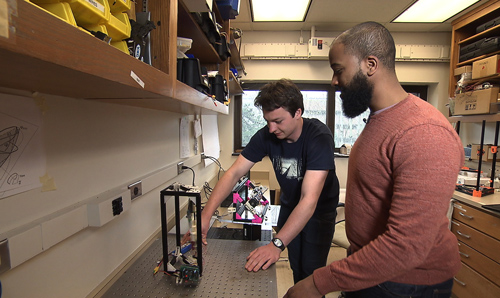 Published in January in the Journal of the Royal Society Interface, the research was supported by the Air Force Office of Scientific Research. It was a key part of the successful proposal for an Air Force Center of Excellence on Nature-Inspired Flight Technologies and Ideas, a new UW center focused on understanding how elements in nature can inform the development of remotely controlled small aircraft.

“I was surprised at the results,” said Brad Dickerson, a graduate student in biology and co-author of the study. “This idea of wings being gyroscopes has existed for a long time, but this paper is the first to really address how that would be possible.”

Dickerson and another UW graduate student, Annika Eberle, conducted the research seeking to determine whether insects could use the bending of their wings to sense rotations of their bodies during flight. This could help explain how these master flyers are able to move with precision and speed.

The pair first developed a computational model of a flapping, flexing, rotating plate. To test their results, they built a robotic model using plastic sheeting mounted on a motor to simulate a flapping wing, then mounted that structure onto a second motor to rotate it.

They discovered that the model wing twisted when flapped and rotated around its base, causing changes in patterns of strain across the wing’s surface. The researchers believe that the strain might stimulate sensors embedded in the wing — suggesting that the wings of flying insects might, as halteres do, provide them with gyroscopic information. 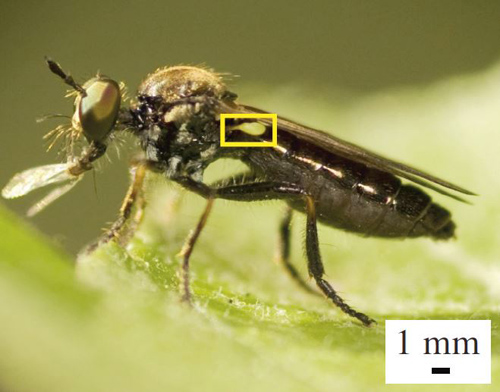 A robber fly with a very large haltere (inside yellow box). Halteres are sensors that act like gyroscopes, providing information about the insect’s body rotations during flight. Image credit: Armin Hinterwirth

Eberle, a graduate student in mechanical engineering and the paper’s corresponding author, said the results suggest that additional information about flight dynamics could be gleaned by embedding sensors onto the surface of manufactured wings. In turn, that knowledge could eventually help engineers design more efficient wings for structures such as micro air vehicles, helicopters and turbines.

But first, Eberle said, more research is needed to determine what relationship exists between animals’ wing flexibility and sensing capability.

“We don’t understand yet what those principles might be,” she said. “These are 10-year visions.”

The pair of researchers said they are excited about the opportunities that the new Air Force center offers to uncover biological principles and develop new bio-inspired designs.

Senior authors are Per Reinhall, chair of the UW’s mechanical engineering department, and Tom Daniel, a UW professor of biology and director of the new Air Force center.