AUSTIN, Texas — New research that revises recently established conventions allowing scientists to decipher color in dinosaurs may also provide a tool for understanding the evolutionary emergence of flight and changes in dinosaur physiology prior to the origin of flight.

In a survey comparing the hair, skin, fuzz and feathers of living terrestrial vertebrates and fossil specimens, a research team from The University of Texas at Austin, The University of Akron, the China University of Geosciences and four other Chinese institutions found evidence for evolutionary shifts in the relationship between color and the shape of pigment-containing organelles known as melanosomes, as reported in the Feb. 13 edition of Nature. 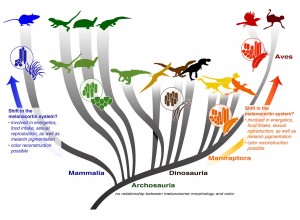 The “rules” allowing color reconstruction from the shape of melanin-containing organelles originate with feathered dinosaurs, and are associated with an increase in melanosome diversity. However, fuzzy dinosaurs like T. rex and Sinosauropteryx show a pattern found in other amniotes like lizards and crocodilians in which a limited diversity of shapes doesn’t allow color reconstruction. An explosion in the distribution of the shapes of melanin-containing organelles preserved in living taxa and the fossil record may point to a key physiological shift within feathered dinosaurs. Image credit: Li et al. (authors). Click image to enlarge.

At the same time, the team discovered that endothermic (commonly known as warm-blooded) birds and mammals shared a pattern of diverse melanosome shapes distinct from living ectothermic (cold-blooded) animals such as lizards, turtles and crocodiles.

Melanosomes have been at the center of recent research that has led scientists to suggest the colors of ancient fossil specimens covered in fuzz or feathers.

Melanosomes contain melanin, the most common light-absorbing pigment found in animals. Examining the shape of melanosomes from fossil specimens, scientists have recently suggested the color of several ancient species, including the fuzzy first-discovered feathered dinosaur Sinosauropteryx, and feathered species like Microraptor and Anchiornis.

According to the new research, color-decoding works well for some species, but the color of others may be trickier than thought to reconstruct.

Comparing melanosomes of 181 extant specimens, 13 fossil specimens and all previously published data on melanosome diversity, the researchers found that living turtles, lizards and crocodiles, which are ectothermic, show much less diversity in the shape of melanosomes than birds and mammals, which are endothermic (warm-blooded, with higher metabolic rates). 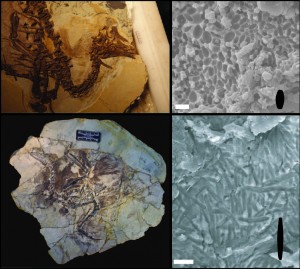 These are two of the fossil specimens sampled from the Cretaceous and Jurassic of China. Fuzz-covered dinosaur Beipiaosaurus shows the rounder melanosomes seen in living lizards and crocodilians while the bird shows the unique skinny melanosomes seen in living mammals, birds and many of the studied feathered dinosaurs to date. Changes in the diversity of these melanin-containing organelles may show a physiological shift occurred in feathered dinosaurs closer to the origin of flight. Image credit: Li et al. (authors). Click image to enlarge.

The limited diversity in melanosome shape among living ectotherms shows little correlation to color. The same holds true for fossil archosaur specimens with fuzzy coverings scientists have described as “protofeathers” or “pycnofibers.” In these specimens, melanosome shape is restricted to spherical forms like those in modern reptiles, throwing doubt on the ability to decipher the color of these specimens from fossil melanosomes.

In contrast, in the dinosaur lineage leading to birds, the researchers found an explosion in the diversity of melanosome shape and size that appears to correlate to an explosion of color within these groups. The shift in diversity took place abruptly, near the origin of pinnate feathers in maniraptoran dinosaurs.

“This points to a profound change at a pretty discrete point,” says author Julia Clarke of The University of Texas at Austin’s Jackson School of Geosciences. “We’re seeing an explosion of melanosome diversity right before the origin of flight associated with the origin of feathers.”

Researchers were surprised by a similarity in the pattern of melanosome diversity among ancient maniraptoran dinosaurs, paravians, and living mammals and birds.

“Only in living, warm-blooded vertebrates that independently evolved higher metabolic rates do we see the melanosome diversity we also see in feathered dinosaurs,” said co-author Matthew Shawkey of The University of Akron.

Many of the genes involved in the melanin color system are also involved in other core processes such as food intake, the stress axis and reproductive behaviors. Because of this, note the researchers, it is possible that the evolution of diverse melanosome shapes is linked to larger changes in energetics and physiology.

Melanosome shape could end up offering a new tool for studying endothermy in fossil specimens, a notoriously challenging subject for paleontologists.

Because the explosion of diversity in melanosomes appears to have taken place right at the origin of pinnate feathers, the change may indicate that a key shift in dinosaurian physiology occurred prior to the origin of flight.

“We are far from understanding the exact nature of the shift that may have occurred,” says Clarke. “But if changes in genes involved in both coloration and other aspects of physiology explain the pattern we see, these precede flight and arise close to the origin of feathers.” 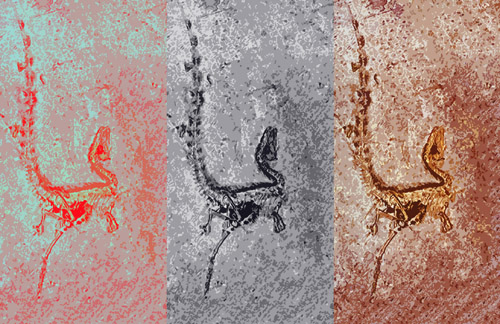 Analysis for the distribution of shapes of melanin-containing organelles (melanosomes) in fossil and living amniotes shows that fuzz-covered dinosaurs like Sinosauropteryx share similarities with living lizards, turtles and crocodilians. In these living taxa color and the shape of the melanosomes are not linked in such a way that color can be reconstructed from melanosome shape alone. Melanosomes in Sinosauropteryx don’t presently tell us if this animal was brown, blackish or grey. However, feathered dinosaurs are similar to birds, and we can estimate their color. Image credit: Li et al. (authors)

It is possible, notes Clarke, that a diversity in melanosome shape (and correlated color changes) resulted from an increased evolutionary role for signaling and sexual selection that had a carryover effect on physiology, or that a change in physiology closely preceded changes in color patterning. At this point, she stresses, both ideas are speculative.

“What is interesting is that trying to get at color in extinct animals may have just started to give us some insights into changes in the physiology of dinosaurs.”