There is no cure for Alzheimer’s disease and other forms of dementia, but the research community is one step closer to finding treatment.

University of Washington bioengineers have designed a peptide structure that can stop the harmful changes of the body’s normal proteins into a state that’s linked to widespread diseases such as Alzheimer’s, Parkinson’s, heart disease, Type 2 diabetes and Lou Gehrig’s disease. The synthetic molecule blocks these proteins as they shift from their normal state into an abnormally folded form by targeting a toxic intermediate phase.

The discovery of a protein blocker could lead to ways to diagnose and even treat a large swath of diseases that are hard to pin down and rarely have a cure.

“If you can truly catch and neutralize the toxic version of these proteins, then you hopefully never get any further damage in the body,” said senior author Valerie Daggett, a UW professor of bioengineering. “What’s critical with this and what has never been done before is that a single peptide sequence will work against the toxic versions of a number of different amyloid proteins and peptides, regardless of their amino acid sequence or the normal 3-D structures.” 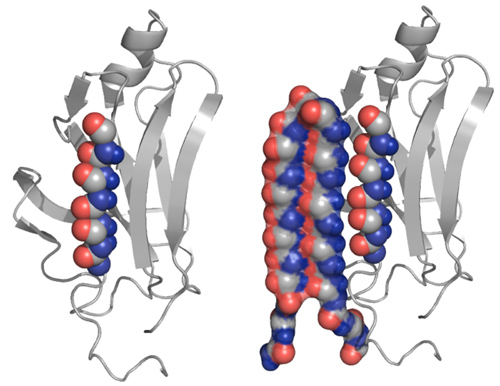 An abnormal protein, left, is intercepted by the UW’s compound that can bind to the toxic protein and neutralize it, as shown at right. Image credit: U of Washington

The findings were published online in the journal eLife.

More than 40 illnesses known as amyloid diseases – Alzheimer’s, Parkinson’s and rheumatoid arthritis are a few – are linked to the buildup of proteins after they have transformed from their normally folded, biologically active forms to abnormally folded, grouped deposits called fibrils or plaques. This happens naturally as we age, to a certain extent – our bodies don’t break down proteins as quickly as they should, causing higher concentrations in some parts of the body.

Each amyloid disease has a unique, abnormally folded protein or peptide structure, but often such diseases are misdiagnosed because symptoms can be similar and pinpointing which protein is present usually isn’t done until after death, in an autopsy.

As a result, many dementias are broadly diagnosed as Alzheimer’s disease without definitive proof, and other diseases can go undiagnosed and untreated. 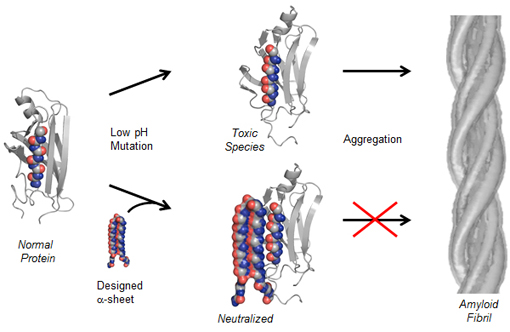 In this diagram, a normal protein begins to convert into a toxic, intermediate state (above center). The UW’s compound can bind with the toxic species and neutralize it (below center), preventing amyloid fibrils from forming. Image credit: U of Washington

The molecular structure of an amyloid protein can be only slightly different from a normal protein and can transform to a toxic state fairly easily, which is why amyloid diseases are so prevalent. The researchers built a protein structure, called “alpha sheet,” that complements the toxic structure of amyloid proteins that they discovered in computer simulations. The alpha sheet effectively attacks the toxic middle state the protein goes through as it transitions from normal to abnormal.

The structures could be tailored even further to bind specifically with the proteins in certain diseases, which could be useful for specific therapies. 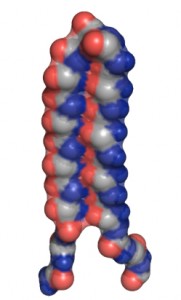 The researchers hope their designed compounds could be used as diagnostics for amyloid diseases and as drugs to treat the diseases or at least slow progression.

“For example, patients could have a broad first-pass test done to see if they have an amyloid disease and then drill down further to determine which proteins are present to identify the specific disease,” Daggett said.

Working with the UW’s Center for Commercialization, they have a patent on one compound and have submitted an application to patent the entire class of related compounds.

This research began a decade ago in Daggett’s lab when a former graduate student, Roger Armen, first discovered this new secondary structure through computer simulations. Daggett’s team was able to prove its validity in recent years by designing stable compounds and testing their ability to bind toxic versions of different amyloid proteins in the lab.

The research was funded by the National Institutes of Health (General Medicine Sciences), the National Science Foundation, the Wallace H. Coulter Foundation and Coins for Alzheimer’s Research Trust.