Geothermal energy, a clean, renewable source of energy produced by the heat of the earth, provides about 6 percent of California’s total power. That number could be much higher if associated costs were lower. Now scientists at the Department of Energy’s Lawrence Berkeley National Laboratory (Berkeley Lab) have launched two California Energy Commission-funded projects aimed at making geothermal energy more cost-effective to deploy and operate.

“There is huge potential for geothermal energy in the U.S., and especially in California,” said Patrick Dobson, who leads Berkeley Lab’s Geothermal Systems program in the Energy Geosciences Division. “The U.S. Geological Survey has estimated that conventional and unconventional geothermal resources in the western U.S. are equivalent to half of the current installed generation capacity of the U.S.; however, commercial development of these resources would require significant technological advances to lower the cost of geothermal deployment.”

The first project will test deployment of a dense array of seismic sensors to improve the ability to image where and how fluids are moving underground. The second project will develop and apply modeling tools to enable geothermal plants to safely run in flexible (or variable) production mode, allowing for better integration with other renewable energy sources. The California Energy Commission’s Electric Program Investment Charge (EPIC) program has awarded Berkeley Lab a total of $2.7 million for the two projects. 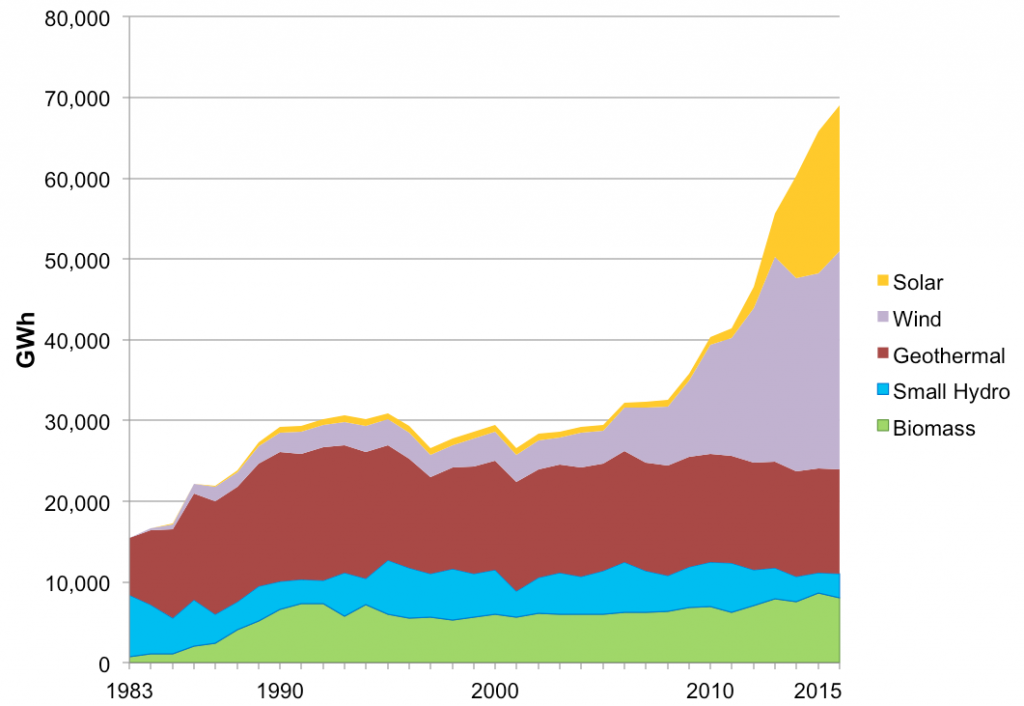 California is looking to geothermal energy to help in reaching its goal of getting half of its electricity from renewable sources by the year 2030. Geothermal plants are possible only in locations with particular geological characteristics, either near active volcanic centers or in places with a very high temperature gradient, such as parts of the western United States. Thanks to its location on the Pacific “Ring of Fire,” California has a vast amount of geothermal electricity generation capacity.

While geothermal technology has been around for some time, one of the main barriers to wider adoption is the high up-front investment. “A large geothermal operator might drill three wells a year at a cost of approximately $7 million dollars per well. If one of the wells could provide twice the steam production, a savings of $7 million dollars could be realized. That’s where we come in,” said Lawrence Hutchings, a Berkeley Lab microearthquake imaging specialist who has worked in geothermal fields around the world.

In a project led by Berkeley Lab scientist Kurt Nihei, a dense network of portable seismic recorders (about 100 recorders over a 5 square kilometer area) will be installed to demonstrate the ability to perform high-resolution tomographic imaging. “The goal is to image where steam and fluids are going using geophysics,” Nihei said. “We will improve the spatial resolution of the imaging using a dense array and demonstrate that this can be done cost-effectively in an operating geothermal field.”

The demonstration will take place at The Geysers, the world’s largest geothermal field, located north of San Francisco in Sonoma and Lake Counties. Wells there—some deeper than two miles—bring steam to the surface. The steam is converted to electricity while water is injected into the underground rock to replenish the steam.

Berkeley Lab scientists currently run a network of 32 seismic recorders at The Geysers to monitor microearthquakes. With the dense network of 100 inexpensive seismic recorders, they will be able to improve the resolution of seismic imaging sufficient to track fluid movement as it moves through the network of fractures that intersect the injection wells.

“Similar to what is done in medical ultrasound tomography with sound waves, we will record seismic waves—both compressional waves and shear waves—from which we can extract information about rock properties, fluid properties, and changes in the subsurface stresses,” Nihei said. “We think these images will allow us to get a clearer picture of where fluids are going and how stresses in the rock are changing in time and space between the injection wells and production wells.”

Having a better understanding of fluid flow in fractured geothermal reservoirs would be a big benefit for well placement as well as cost-effective operation. “If they can increase the likelihood getting a productive well every time they drill, it would be huge,” said Hutchings. “More than 10 percent of California’s total renewable energy capacity comes from geothermal, so the potential impact of this technology is exciting.”

Lowering the cost of renewables

In the second project, led by Berkeley Lab scientist Jonny Rutqvist, the goal is to enable the conversion of geothermal production from baseload or steady production to flexible or variable mode. Flexible-mode geothermal production could then be used as a supplement to intermittent renewable energy sources such as wind and solar, which are not available around the clock, thus significantly reducing the costs of storing that energy.

The technical challenges are considerable since grid demands may require rapid changes, such as reducing production by half within tens of minutes and then restoring full production after a few hours. Such changes could lead to mechanical fatigue, damage to well components, corrosion, and mineral deposition in the wells.

“A better understanding of the impacts of flexible-mode production on the reservoir-wellbore system is needed to assure safe and sustainable production,” said Rutqvist.

Berkeley Lab will adapt a suite of their modeling tools for wellbore and geothermal reservoir integrity, including T2WELL, which models fluid flow and heat transfer in wells; and TOUGHREACT, which simulates scaling and corrosion. These tools will be integrated with geomechanical tools into an improved thermal-hydrological-mechanical-chemical (THMC) model to address the specific problems.

“This will provide the necessary tools for investigating all the challenges related to flexible-mode production and predict short- and long-term impacts,” Rutqvist said. “The advantages to California are many, including greater grid reliability, increased safety, and lower greenhouse gas emissions.”

In both projects, the Berkeley Lab researchers will be working with Calpine Corporation, which has the largest commercial operation at The Geysers. Calpine will contribute data as well as access to their sites and models. The projects build on a wide variety of prior research at Berkeley Lab funded by the DOE’s Geothermal Technologies Office.