New Plant Species from the Heart of Texas

Collectors found the first two specimens of the prickly plant in 1974 and 1990 in west Texas. Then, for two decades, the 14-inch-tall plant was identified wrongly as one species, then another and then a third.

Now – after a long search turned up a “pathetic, wilted” third specimen – a University of Utah botanist and her colleagues identified the spiny plant as a new, possibly endangered species and named it “from the heart” in Latin because it was found in Valentine, Texas, population 134 in 2010.

Most new plant species are found in the tropics, and it is uncommon for a new one – especially a flowering plant – to be found in the United States, says University of Utah biology professor Lynn Bohs, senior author of a new study describing and naming Solanum cordicitum (pronounced So-lay-num core-duh-SEE-tum).

“It’s a new, unique plant from the United States,” she says. “Plus it’s from Valentine, which is extremely charming, and that gave rise to its name, S. cordicitum.” 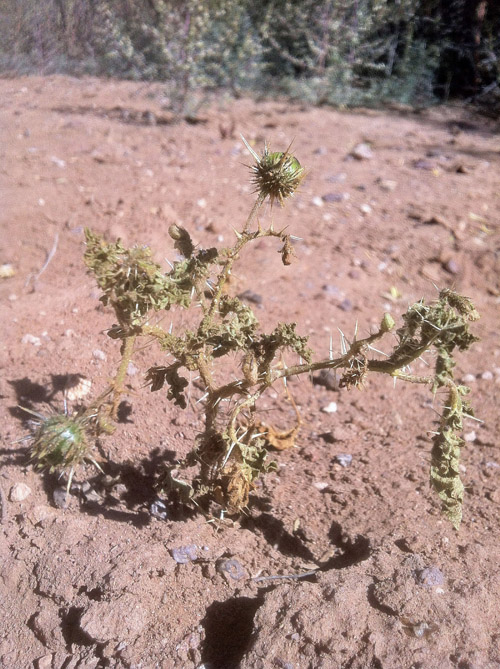 This spiny and wilted plant – shown here where it was found in Valentine, Texas in November 2013 – is only the third specimen of Solanum cordicitum ever found. The first specimen was found in 1974 and the second in 1990, but over the years, the plant was wrongly assigned to three different Solanum species before a study led by University of Utah botanist Lynn Bohs identified it as an entirely new but likely endangered species. Solanum is among the largest genera of flowering plants, and includes tomatoes, potatoes, chili peppers and eggplants. Photo Credit: Jeffrey Keeling, Sul Ross State University

Bohs’ study identifying S. cordicitum as a new species was published in the Aug. 1 issue of the Journal of the Botanical Research Institute of Texas.

The three specimens of S. cordicitum – all now pressed and mounted in museums – are the only ones known to exist. The new species belongs to the genus Solanum, which includes some 1,500 species of mostly poisonous plants, including nightshades, but also three economically important, global food crops: tomatoes, potatoes and eggplants – the last of which is most closely related to S. cordicitum, Bohs says.

Cordicitum is derived from cordicitus, Latin for “from the heart,” but is altered to cordicitum because it must end with the same syllable as Solanum to comply with naming rules. The plant has no common name. The derivation of Solanum is unknown, but may be from sol for sun or from solamen for consolation, comforting or quieting.

“Some of them are permanently quieting because they are deadly poisonous,” Bohs says. The Solanaceae family, including the genus Solanum, is known as the nightshade family, and many of the plants are toxic, hallucinogenic or medicinal, although others – like tomatoes, potatoes and chili peppers – are edible. 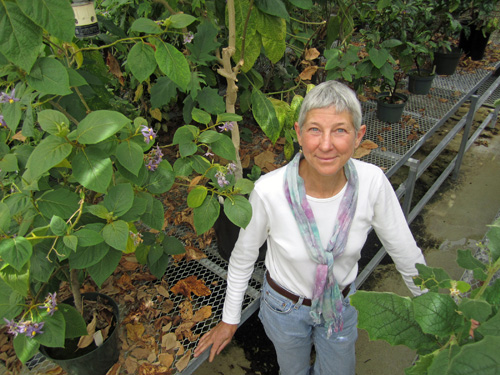 Botanist Lynn Bohs, a University of Utah biology professor shown here in a campus greenhouse, has published a new study that identifies a new and prickly species named Solanum cordicitum (not shown in photo). The word cordicitum is derived from Latin for “from the heart” because two of the three known speciments of the possibly endangered plant were found in the tiny west Texas town of Valentine. Photo Credit: Lee J. Siegel, University of Utah

The International Union for the Conservation of Nature’s Red List of endangered and threatened species categorizes the status of newly identified S. cordicitum as “data deficient,” but Bohs says it “probably is really endangered.”

Bohs conducted the research with two other botanists: Stephen R. Stern, who earned his doctorate at the University of Utah and now is on the faculty of Colorado Mesa University in Grand Junction; and Jeffrey Keeling, who just earned his master’s degree at Sul Ross State University in Alpine, Texas. 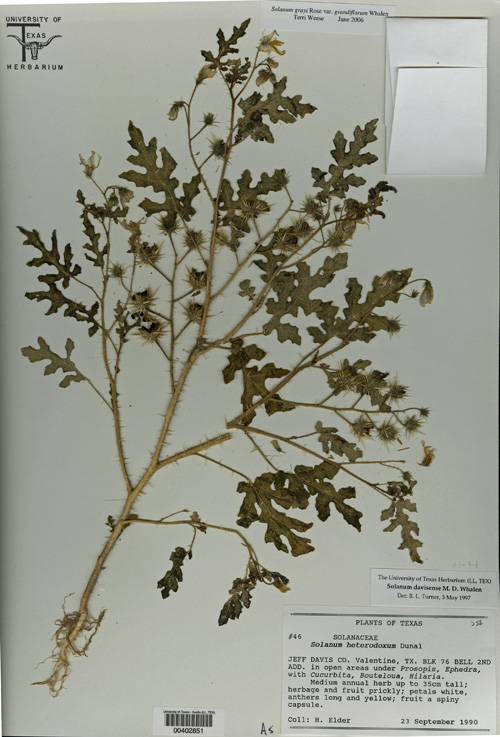 This pressed specimen of newly identified plant species Solanum cordicitum was found in 1990 in Valentine, Texas. Labels on the mounting paper show the plant was incorrectly identified as belonging three different species in 1990, 1997 and 2006 before a new University of Utah-led study showed it is indeed a separate species. It is unusual for new species of flowering plants to be found in the United States, which has been well-explored by plant collectors. Photo Credit: University of Texas Herbarium

Three Other Plants Elevated from Varieties to Species

Discovery of the new species was a small part of a five-year, $4.36-million National Science Foundation-funded study – led by Bohs – to better classify and create a comprehensive online inventory of  all 1,500 species in Solanum, one of Earth’s largest genera of flowering plants.

In the same study, the botanists elevate to full species status three other closely related plants that were previously named varieties of other Solanum species but that DNA analysis showed to be separate species. Like the new species, they all belong to a group of Solanum named section Androceras, which now includes 16 species with the reclassifications by Bohs and colleagues:

– S. knoblochii (no-BLOCK-ee-eye) previously was classified as S. citrullifolium variety knoblochii. Only five plants have been collected from two sites in Mexico’s western Chihuahua state. Its status is “data deficient,” but Bohs and colleagues write that it “warrants near-threatened status.”

– S. setigeroides (seh-tidge-ger-OID-ees) and S. novomexicanum (novo-Mexi-can-um) both were classified previously as varieties of S. heterodoxum. The first species is a widespread weed from northern Chihuahua and west Texas to central Arizona and New Mexico. The other is found only in northern New Mexico. The Red List categorizes both as species of “least concern,” meaning they are neither threatened nor endangered. 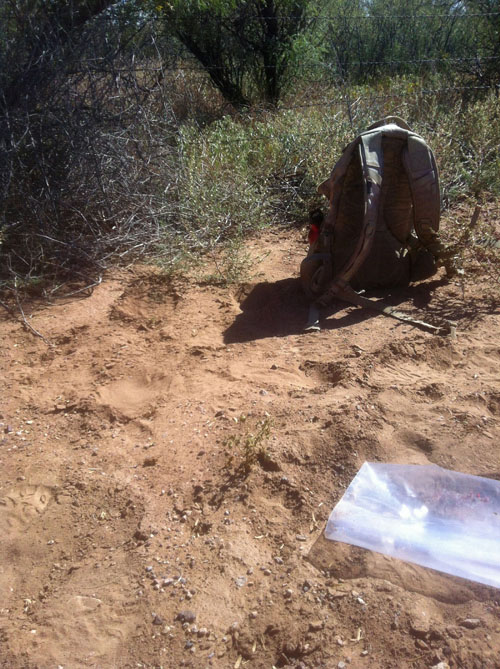 This photo shows a the specimen of Solanum cordicitum found in Valentine, Texas in 2013 with a dayback and plastic bag on the ground to provide some scale and indicate the small size of the prickly plant, which grows no higher than 14 inches. Photo Credit: Jeffrey Keeling, Sul Ross State University

Hunting for a Suspected New and Endangered Species

Newly identified S. cordicitum grows only about 14 inches tall. The stems and leaf stalks have very short hairs as well as prickles or spines about one-fifth-inch long, “but that’s still long enough to stick you,” Bohs says. The leaves have three or four lobes on each side. Prickles also cover the flower clusters, which have five to eight flowers.

“Prickles are all over this sucker,” Bohs says.

The first specimen of S. cordicitum was collected in October 1974 on U.S. 166 about 30 miles west of Fort Davis, Texas. Then in September 1990, a Valentine resident named Howard Elder found the plant on his property. A botanist wrongly identified the plant as S. heterodoxum. It later was wrongly re-identified two more times: as S. davisense in 1997 and as a variety of S. grayi in 2006.

But Bohs and colleagues believed it was none of those species because its flower petals are white instead of yellow, and its flower stalks are longer and flowers are larger than closely related species. There also are differences from other species in leaf shape and in stem hairs.

Also, a study published in 2010 by Stern, Bohs and Utah postdoctoral researcher Terri Weese showed the plant’s DNA differed from known species. And the plant is an annual, while related species are perennials.

So Bohs and colleagues decided to try to find more specimens. In 2010, Stern – then a Utah grad student – spent days looking for the plant in Texas without success.

In November 2013, Keeling searched the Valentine area for days before finding the third specimen on the Elder property  – near where the 1990 specimen was found.

“He looked everywhere and finally found one horrible, wilted plant specimen,” Bohs says. “It looked awful. It was wilted and brown and had some seeds we thought we’d be able to germinate, but they weren’t any good. It was totally pathetic, and we were sad because we wanted a beautiful picture of the flowers to put in a publication.”

“It’s probably not extinct because Keeling found one plant that had been living in 2013,” she adds. “Whether that was the last one or not, we don’t know. We’re hoping that by publicizing this, more people will look for it and more plants will be found.” Stern believes more are out there.

Weedy but Not a Weed

S. cordicitum and the varieties that are newly elevated to species belong to section Androceras, which is a group of weedy Solanum plants native to the central and southwestern U.S. and Mexico. That is unusual because most Solanum groups are tropical, Bohs says. The most widespread Androceras species is S. rostratum, known as buffalo bur, prickly nightshade and Kansas thistle.

In all Androceras species, the calyx, or outer envelope of the flower and fruit “is really spiny,” Bohs says. A larger group of 350 to 400 Solanum species are known as “spiny solanums” because they have prickles. The group includes wild eggplant. Spines have been bred out of domestic eggplant.

While S. cordicitum belongs to a weedy group within the spiny solanums, technically it isn’t a weed because weeds are more common and spread easily, Bohs says.

Like other plants in Androceras, the new species and its five-petaled flowers are “bilaterally symmetrical” (like a mirror image down a vertical line) but not symmetrical in all directions because the five petals vary in size. Four of its yellow anthers – pollen organs within the flower – are the same size, but the fifth is bigger.