California is on track to meet its state-mandated targets for reducing greenhouse gas emissions for 2020, but it will not be able to meet its 2050 target without bold new technologies and policies. This is the conclusion of the California Greenhouse Gas Inventory Spreadsheet (GHGIS), a new model developed by the U.S. Department of Energy’s Lawrence Berkeley National Laboratory (Berkeley Lab) to look at how far existing policies and technologies can get us in emissions reductions.

A 2005 executive order requires California to reduce its emissions of heat-trapping greenhouse gases—including carbon dioxide, methane, nitrous oxide and hydrofluorocarbons—to 80 percent below 1990 levels by 2050. “This is quite a stringent requirement, and even if we aggressively expand our policies and implement fledgling technologies that are not even on the marketplace now, our analysis shows that California will still not be able to get emissions to 85 million metric tons of CO2-equivalent per year by 2050,” said Jeff Greenblatt, a Berkeley Lab researcher who created the GHGIS.

The model, developed on a Microsoft Excel spreadsheet, considered three scenarios for California’s future and forecast emissions levels for each one. The baseline case, Scenario 1, assumes that the state will proceed with all committed policies. Scenario 2 adds additional uncommitted policies, such as expanded building retrofits, waste diversion and biofuel usage. Scenario 3, the most ambitious case, assumes extensions of policies to implement emerging technologies, such as higher vehicle fuel efficiencies, greater amounts of biofuels, more zero-emission and natural gas vehicles, and a higher renewable portfolio standard.

Next Greenblatt took official state projections of growth in population and gross state product, the two main drivers for the expected increase in greenhouse gas emissions. In the next 40 years, the state’s population is forecast to cross the 50-million mark, gaining 15.4 million people between 2010 and 2060, according to the California Department of Finance’s latest projections.

What the GHGIS model found was that, across the three scenarios, emissions in 2020 fall to between 285 and 406 million metric tons of CO2-equivalent per year (MtCO2/year). Total emissions for 2011 were 448 MtCO2/yearand have been trending down over the last decade. Greenblatt’s model found they fall further in 2030 to between 208 and 396 MtCO2/year, depending on the scenario. 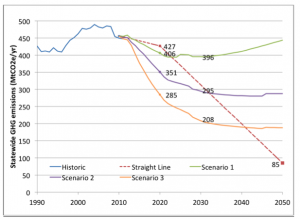 A comparison of greenhouse gas emissions by Scenario, along with historical and “straight-line” connections between 2020 and 2050 policy targets. Image credit: California Greenhouse Gas Inventory Spreadsheet (Click image to enlarge)

By 2050 emissions start to rise slightly in Scenarios 1 and 2, to 444 and 288 MtCO2/year, respectively, and to 188 MtCO2/year in Scenario 3, still far short of the 85 MtCO2/year target. Some of the policies assumed in Scenario 3 include: average fuel efficiency of 77.9 mpg for light-duty vehicles in 2050, 51 percent of electricity produced from renewable sources, cleaner fuels and 1 percent renewable jet fuel by 2015.

Greenblatt is also co-author of a 2011 report for the California Council on Science and Technology looking at what technologies and policies would be required to meet the 2050 target. That report found that meeting the goal would require aggressive efficiency and electrification as well as maturation of technologies still in development, such as advanced batteries and more efficient biofuels.

The GHGIS model covers 2010 to 2050 and includes all sectors of the California economy known to emit greenhouse gases, including water, waste, electricity generation, light-duty vehicles, heavy-duty vehicles, fuels and buildings.

This research was funded by the California Air Resources Board. The full report can be found here. [https://eetd.lbl.gov/publications/estimating-policy-driven-greenhouse-g]