A North Carolina State University invention has significant potential to improve the efficiency of solar cells and other technologies that derive energy from light.

Dr. Ahmed El-Shafei’s research group invented a new “sensitizer,” or dye, that harvests more ambient and solar light than any dyes currently on the market for use in dye-sensitized solar cells (DSSCs). 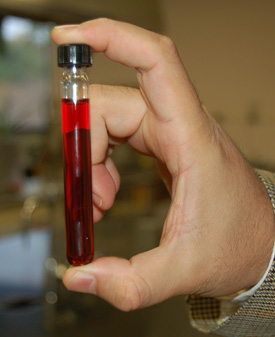 “A third-party solar energy company compared our new dye, NCSU-10, against the state-of-the-art dye on the market. Our dye had 14 percent more power density,” says El-Shafei, an assistant professor in the Textile Engineering, Chemistry and Science department. “In other words, NCSU-10 allows us to harvest more energy from the same amount of light.”

The new dye should significantly boost the efficiency of DSSCs, which have a host of applications. Indoors, these DSSCs can be used in technology to power cellular phones, laptop computers and MP3 players using ambient light. Outdoors, they could be used in conventional solar arrays or in improved energy-driven applications for building-integrated photovoltaic products including, but not limited to, windows, facades and skylights.

Compared to the state-of-the-art dye on the market, NCSU-10 can absorb more photons at lower dye concentrations, and can therefore be used to create more effective solar cells on windows and facades while still allowing the windows to be highly transparent.

DSSCs are made of inexpensive and environmentally benign materials including a dye, an electrolyte and titanium dioxide (TiO2) – the white component used in toothpaste. DSSCs work by absorbing photons, or discrete packets of light energy, from incident light (or direct light that falls on a surface) to create free electrons in nanoporous semiconductors such as TiO2, in the cell. These electrons travel to the outside circuit to generate an electric current. Owing to their independence on the angle of incident light and high response to low level of lighting conditions, DSSCs outperform conventional silicon photovoltaic by 20 to 40 percent under diffuse light, on cloudy and/or rainy days, and in indoor ambient light, which make DSSCs a unique class of photovoltaics.

A patent is pending on the new dye, and the university is in communication with potential industry partners about licensing use of NCSU-10, as well as funding additional research in this area.