COLUMBUS, Ohio – Researchers are beginning their analysis of what are probably the first successful ice cores drilled to bedrock from a glacier in the eastern European Alps.

With luck, that analysis will yield a record of past climate and environmental changes in the region for several centuries, and perhaps even covering the last 1,000 years. Scientists also hope that the core contains the remnants of early human activity in the region, such as the atmospheric byproducts of smelting metals.

The project, led by a team of Ohio State University scientists and their European colleagues, retrieved four cores from a glacier high atop Mount Ortles, a 3,905-meter (12,812-feet) peak in northeastern Italy. Three were 75 meters long (246-feet) and one was 60 meters (197 feet). They are significant in two ways: 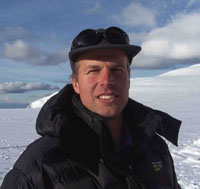 First, scientists had previously believed that the glacier was at too low an altitude to contain ice cold enough to have preserved a clear climate record.

While the top one-third of the cores do show that melt water had percolated downwards, possibly affecting the record, the remaining two-thirds of the cores contained unaltered ice from which the research team should be able to retrieve a climate history.

Secondly, since no other ice core analyses have been retrieved from the eastern side of the Alps, this work should paint a much clearer picture of climate change in this portion of Europe.

“The entire glacier may transition to a temperate state within the next decade or so,” he said. That probable change made the retrieval of these cores now even more important so that the ice record won’t be lost for future research.

Gabrielli said that previous research has shown already that there is an increase in summer temperatures at high elevations in the region of up to 2 degrees C (3.6 degrees F) over the last three decades. In spite of the melting in the top parts of the cores, the researchers hope to find a record that begins in the 1980s and proceeds back several centuries, or perhaps more.

Based on weather patterns, ice in the cores that was formed during past summers will likely paint a picture of past climate in an area close to the mountain, perhaps only 10 to 100 kilometers (6.21 to 62.1 miles) away.

But ice formed during past winters should provide clues to a much wider area, Gabrielli said, perhaps as much as 1,000 kilometers (621 miles).

An analysis of the ice might also answer some important questions about the region, such as the climate change in the region during the transition between the Medieval Warm Period and the Little Ice Age.

The research team, with co-leader Lonnie Thompson, Distinguished Professor of Earth Sciences at Ohio State, spent two weeks on the glacier, drilling the four cores. Along with him, Victor Zagorodnov, also from Ohio State, worked on the project.

Support from the project came from the National Science Foundation.