Jeff Hou is a professor of landscape architecture and adjunct professor of urban design and planning in the University of Washington’s College of Built Environments. His research, teaching and practice focus on community design, design activism, cross-cultural learning and engaging marginalized communities in planning and design.

Hou has written extensively on the agency of citizens and communities in shaping the built environments. He is the author of several books, including Insurgent Public Space: Guerrilla Urbanism and the Remaking of Contemporary Cities (2010). 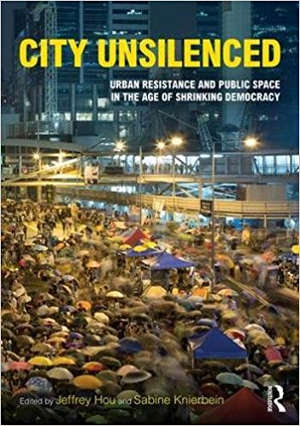 “City Unsilenced: Urban Resistance and Public Space in the Age of Shrinking Democracy,” edited by the UW’s Jeff Hou, with Sabine Knierbein, was published by Routledge. Image credit: University of Washington

His newest book is “City Unsilenced: Urban Resistance and Public Space in the Age of Shrinking Democracy,” co-edited by Sabine Knierbein, associate professor for urban culture and public space at the Vienna University of Technology, and published by Routledge. Hou answered a few questions about his book for UW News.

What’s the concept of the book and how did it come about?

JH: The book examines the roles of public space in the rising number of protests around the world and as possibly a vestige of democracy. Specifically, we are interested in how urban public spaces provide visibility to critical social, political and economic issues of our time, how they allow a variety of participants and stakeholders to assemble, and how they necessitate negotiation of different interests and perspectives. As the book is a collection of case studies around the world from Barcelona to Brazil, Madrid to Mexico City, and Taipei to Tokyo, we are also interested in the common features that link these different cases.

The book came out my visiting professorship in Vienna in 2014 through the Interdisciplinary Center for Urban Culture and Public Space (SKuOR) at TU Wien (Vienna University of Technology). During that time, my host professor Knierbein and I were interested in expanding the contemporary thinking on the role of public space. As we were both interested in recent social movements around the world, the relationships between urban resistance and public space quickly came to focus.

What do recent urban resistance tactics around the world have in common in their use of public space?

JH: Some of the common threads include the use of social media for messaging and enabling spontaneous mass mobilizing in a way that was not possible before. The communication technology also allows for a much more rapid dissemination of information, allowing movements to spread in regions and become networked.

Other common threads include creative uses of public space that welcome a variety of participants, even parents and children. During the Occupy Movement as well as a number of other examples, ordinary plazas or streets were transformed to places that would host mobile libraries, art workshops and day cares, as well as areas for tents, food and recycling stations, etc. There were also performances and music that helped create an ambience that made them more festival-like than protests, hence the term protestival.

“Acts of public space-based resistance,” you write, “disrupt the neoliberal taming of public life.” Could you explain for the non-expert?

JH: Neoliberalism is a system of governance that favors privatization, austerity, deregulation and reduction in government spending. With declining public funding, the development and maintenance of parks and other open space has relied increasingly on private funding, resulting in the privatization of public space.

At the same time, with diminishing support for public space, private spaces such as shopping malls have increasingly replaced streets and plazas as more desirable places of everyday life. These trends have led to a kind of public space and public life that is “tamed” and devoid of possibilities for active political expressions. How often do we see a political gathering at a mall, for example? In a way, the recent public space-based resistance has revived a role of public space that enables the freedom of expression and assembly to be exercised.

Have not public spaces been the scene of protest and conflict throughout history? What is unique about their 21st century manifestations?

JH: Yes, public spaces have long been the scene of protest and conflict in history, which we acknowledge in the book. Aside from the role of technology and social media, and the popularity of protestivals, one of the main features of recent protests worldwide has to do with how they are all responding to the different manifestations and impacts of neoliberalism. From debt and the housing crisis in Spain and austerity in Greece to gentrification in San Francisco, the issues that the local populations are facing all share a common thread in the way neoliberal practices are undermining the institutions of democracy that protect the rights and welfare of individuals and communities. The recent protests are part of a large process of mobilization, learning and reawakening to these challenges.

You begin by asking, “What is the significance of urban resistance and public space in the age of shrinking democracy and increasing enclosure?” What, briefly put, were your conclusions?

JH: Our main conclusion is this: These recent protests suggest the important role of public space in supporting active democracy at a time when our democratic institutions are being threatened and undermined by neoliberal practices and resurgence of totalitarianism.

More specifically, public space is important as a means for mass assembly and for bringing attention and visibility to issues that are important to communities and the society. By serving as a stage for contests of interests and perspectives, it is a space of learning. By enabling linkages of issues and challenges, it is also a space for re-scaling and re-politicizing, meaning that a local issue may be an outcome of systematic exploitation, and that this realization can trigger an engagement of political mobilization at a different scale.

Lastly, public space can serve as what we call grounds of alter-politics, a space where alternative visions of society and political engagement can take form.

Finally, you argue that with democracy in retreat globally, public space demonstrations and resistance have an even greater role to play in holding governments accountable to their people. Minus such resistance, you write, “democracy is at risk of becoming stagnant, narrow and obsolete.” Based on your research, what might the future hold for public spaces continuing to feed democracy, and even equity and justice?

JH: The future of public space and democracy is contingent upon our actions. In the wake of the recent protests, there have already been measures for policing taken by authorities that are intended to discourage assemblies or actions that lead to large gatherings. Big data and advanced surveillance technology, including facial recognition can be mobilized for the purpose of policing as well.

Our ability in fighting against these practices will determine the future of our democracy. With public space playing such an important role for freedom of speech and assembly and for holding institutions accountable to the public, the fight for public space is also a fight for democracy that protects equity and justice around the world.