In the introduction, University of Washington geologist David R. Montgomery writes that he never thought he’d write an optimistic book about the environment. Montgomery’s first popular book, “Dirt,” was about how erosion undermined ancient civilizations around the world in places like modern-day Syria and Iraq. 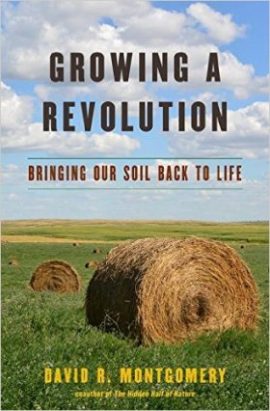 Yet his new book, “Growing a Revolution: Bringing Our Soil Back to Life,” is a good-news environment story. Available May 9 from W.W. Norton, it comes almost exactly a decade after the book that propelled Montgomery to pop-science stardom. During the years since, he has won a MacArthur Fellowship, also known as a ‘Genius Award,’ and published several books for general audiences.

The success of “Dirt” also brought invitations to speak at farming conferences. Along the way, Montgomery met farmers who talked about successes in restoring health to degraded soils.

“I kept running into examples of farmers who had restored fertility to degraded land,” said Montgomery, a UW professor of Earth and space sciences. “So I started asking, what did you do? How long did it take? I began to recognize patterns among farmers who had been successful not just in restoring soil, but in restoring profits to their farms.”

At one event he shared the stage with Howard G. Buffett, Warren Buffett’s farmer-philanthropist son, who stressed the importance of restoring health to U.S. soils. American soils are currently estimated to have lost about half their pre-agricultural organic matter — a key ingredient in fertile soil.

“What really impressed me was how he presented examples of real farmers who had restored fertility to their soil, showing the potential for what he called a ‘Brown Revolution,’” Montgomery said. After that encounter, Montgomery set out to visit farmers around the world who were restoring their soil.

The new book weaves a travelogue with history and science to tell of visits to farms in North and South Dakota, site of the famous Dust Bowl, as well as Ohio, Pennsylvania, Africa and Costa Rica. These farmers use technology ranging from hand-powered machetes to enormous modern no-till seeding machines. Seeing approaches that worked in very different situations, Montgomery sought out the common ground for building fertile soil as a consequence of farming.

These farmers had all moved away from tilling their fields, which chops up worms, erodes soil and disrupts beneficial microbes. Instead they focused on boosting soil health, thereby bolstering a crop’s natural defenses.

“It boils down to a combination of three factors: Park the plow to minimize soil disturbance; grow cover crops, including legumes to get nitrogen and carbon into the soil; and grow a diversity of crops, so that you can break up the pest and pathogen carryover problem,” Montgomery said. “Those three principles — ditch the plow, cover up, grow diversity — were common among the farmers that had restored degraded soils and returned profitability to their farms.”

He intentionally did not seek out “alternative” or “environmental” practices. Except for the Rodale Institute in Pennsylvania, the farms he visited were not certified organic. Most farmers were strongly motivated by economic worries and the skyrocketing costs of herbicides, pesticides and diesel. By nurturing healthier soils that can retain water, suppress pests and don’t require as much fertilizer, pesticides or work of diesel-powered machines, they reduced their costly inputs by at least 50 percent and up to 90 percent.

Beyond the economic payoff for farmers, adopting these practices also produces environmental benefits by reducing chemical use and sequestering carbon from the atmosphere to help counter climate change, Montgomery says.

“I think there’s a big opportunity to make conventional agriculture more ‘organic-ish’ by adopting this suite of practices,” Montgomery said. “By moving away from high-disturbance, high-input agriculture you can reap many of the benefits of soil health without necessarily going fully organic.”

Montgomery’s most recent book, “The Hidden Half of Nature,” co-written with his wife, Anne Biklé, looked at the power of microbes in the soil and in human health. That book told the story of how Biklé nurtured microbial life to restore the soil in their home’s yard, seeing results more quickly than they had imagined was possible.

“This new book was my attempt to ask the question: Can soil be restored at scale? On real farms, not in some little yard in Seattle. Could it be done on real, commercial farms in the developed world, as well as on subsistence farms in the developing world?”

His answer is a strong argument for yes.