COLUMBIA, Mo. ­— More than 27 million adults currently suffer from osteoarthritis, which is the most common form of arthritis. In the past, doctors have been unable to diagnose patients with arthritis until they begin to show symptoms, which include joint pain and stiffness. By the time these symptoms are present, it is often too late for preventive and minimally invasive treatment options to be effective. Now, a research team from the University of Missouri’s Comparative Orthopaedic Laboratory has found a way to detect and predict arthritis before patients begin suffering from symptoms.

James Cook, a researcher from the MU College of Veterinary Medicine and the William C. and Kathryn E. Allen Distinguished Professor in Orthopaedic Surgery, along with MU researchers Bridget Garner, Aaron Stoker, Keiichi Kuroki, Cristi Cook, and Prakash Jayabalan, have developed a test using specific biomarkers that can accurately determine if a patient is developing arthritis as well as predict the potential severity of the disease. The test can be run off of a single drop of fluid from a patient’s joint, which is obtained with a small needle similar to drawing blood. 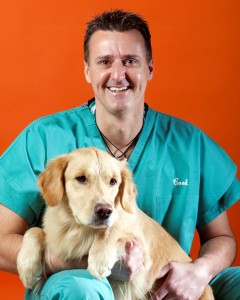 James Cook is a researcher from the MU College of Veterinary Medicine and the William C. and Kathryn E. Allen Distinguished Professor in Orthopaedic Surgery. Image credit: University of Missouri

“With this biomarker test, we can study the levels of specific proteins that we now know are associated with osteoarthritis,” Cook said. “Not only does the test have the potential to help predict future arthritis, but it also tells us about the early mechanisms of arthritis, which will lead to better treatments in the future.”

In their study published in the Journal of Knee Surgery, the MU researchers report that they developed the test by analyzing the joints of dogs that suffer from arthritis. Veterinarians predict that 20 percent of middle-aged dogs and 90 percent of older dogs have osteoarthritis in one or more joints. Since canine joints operate similarly to the joints of humans, Cook says the test is being adapted to human patients.

“This test has already shown early usefulness for allowing us to monitor how different treatments affect the arthritic joints in people,” Cook said. “With further validation, this test will allow doctors to adjust and fine tune treatments to individual patients. Also, being able to tell patients when they are at a high risk for developing arthritis will give doctors a strong motivational tool to convince patients to take preventive measures including appropriate exercise and diet change.”

The biomarker test is currently available for licensing and is in the process of gaining FDA approval.

This study is a result of collaboration through Mizzou Advantage, a program that focuses on four areas of strength at MU: food for the future, media of the future, one health/one medicine, and sustainable energy. The goals of Mizzou Advantage are to strengthen existing faculty networks, create new networks and propel Mizzou’s research, instruction and other activities to the next level. The Mizzou Advantage was created to increase MU’s visibility, impact and stature in higher education, locally, statewide, nationally and around the world.