This experimental flight test is designed to investigate breakthrough technologies that will benefit future Mars missions, including those involving human exploration. Three weeks of testing, simulations and rehearsals are planned before the first launch opportunity on the morning of June 3. LDSD was built at NASA’s Jet Propulsion Laboratory, Pasadena, California, and shipped to Kauai for final assembly and preparations.

“Our Supersonic Flight Dynamics Test Vehicle number 1 arrived at the Navy’s Pacific Missile Range Facility on April 17,” said Mark Adler, project manager of the Low Density Supersonic Decelerator project from JPL. “Since then, we have been preparing it for flight. One of the last big assemblies occurred on April 30, when we mated the vehicle with its Star-48 booster rocket.” 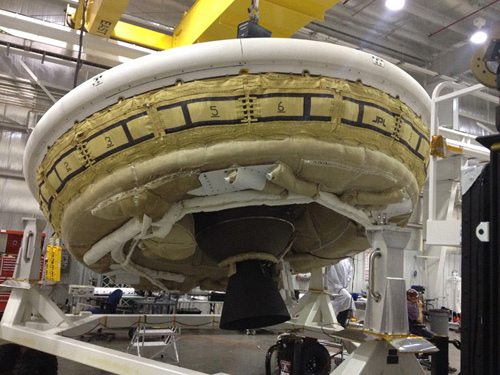 A saucer-shaped test vehicle holding equipment for landing large payloads on Mars is shown in the Missile Assembly Building at the US Navy’s Pacific Missile Range Facility in Kaua’i, Hawaii. Image credit: NASA/JPL-Caltech

During the June experimental flight test, a balloon will carry the test vehicle from the Hawaii Navy facility to an altitude of about 120,000 feet. There, it will be dropped and its booster rocket will quickly kick in and carry it to 180,000 feet, accelerating to Mach 4. Once in the very rarified air high above the Pacific, the saucer will begin a series of automated tests of two breakthrough technologies.

In order to get larger payloads to Mars, and to pave the way for future human explorers, cutting-edge technologies like LDSD are critical. Among other applications, this new space technology will enable delivery of the supplies and materials needed for long-duration missions to the Red Planet.

The upper layers of Earth’s stratosphere are the most similar environment available to match the properties of the thin atmosphere of Mars. The Low Density Supersonic Decelerator mission developed this test method to ensure the best prospects for effective testing of the new and improved technologies here on Earth. 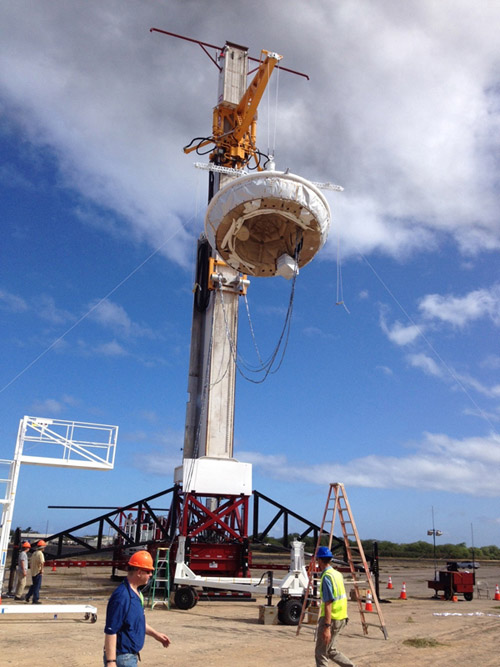 In this picture, NASA’s saucer-shaped experimental flight vehicle is prepared for a Range Compatibility Test at the US Navy’s Pacific Missile Range Facility in Kaua’i, Hawaii. Image credit: NASA/JPL-Caltech

Anyone with Internet access will be able to watch live as video from the June test is relayed from the vehicle to the ground. The low-resolution images from the saucer are expected to show the vehicle dropping away from its high-altitude balloon mothership and then rocketing up to the very edge of the stratosphere. The test vehicle will then deploy an inflatable Kevlar tube around itself, called the Supersonic Inflatable Aerodynamic Decelerator (SIAD). After the SIAD inflates, the test vehicle will deploy a mammoth parachute called the Supersonic Disk Sail Parachute.

While people watching at home may be fascinated by how these two new technologies operate, the NASA flight team will actually be concentrating on a more fundamental question – “Will the test vehicle work as planned?”

“This first test is a true experimental flight test,” said Ian Clark, the LDSD principal investigator from JPL. “Our goal is to get this first-of-its-kind test vehicle to operate correctly at very high speeds and very high altitudes. “

Although there is no guarantee that this first test will be successful, regardless of the outcome, the LDSD team expects to learn a great deal from the test. NASA has two more saucer-shaped test vehicles in the pipeline, with plans to test them from Hawaii in summer of 2015.

“We are pushing the envelope on what we know,” said Clark. “We are accepting higher risk with these test flights than we would with a space mission, such as the Mars Science Laboratory. We will learn a great deal even if these tests, conducted here in Earth’s atmosphere at relatively low cost, fail to meet some of the mission objectives.”

As NASA plans increasingly ambitious robotic missions to Mars, laying the groundwork for even more complex human science expeditions to come, the spacecraft needed to land safely on the Red Planet’s surface will become larger and heavier. This new technology will enable those important missions.

More information about LDSD is at: