PASADENA, Calif. — The existence of a world with a double sunset, as portrayed in the film Star Wars more than 30 years ago, is now scientific fact. NASA’s Kepler mission has made the first unambiguous detection of a circumbinary planet — a planet orbiting two stars — 200 light-years from Earth.

Unlike Star Wars’ Tatooine, the planet is cold, gaseous and not thought to harbor life, but its discovery demonstrates the diversity of planets in our galaxy. Previous research has hinted at the existence of circumbinary planets, but clear confirmation proved elusive. Kepler detected such a planet, known as Kepler-16b, by observing transits, where the brightness of a parent star dims from the planet crossing in front of it.

“This discovery confirms a new class of planetary systems that could harbor life,” Kepler Principal Investigator William Borucki, of NASA’s Ames Research Center in Moffett Field, Calif., said. “Given that most stars in our galaxy are part of a binary system, this means the opportunities for life are much broader than if planets form only around single stars. This milestone discovery confirms a theory that scientists have had for decades but could not prove until now.” 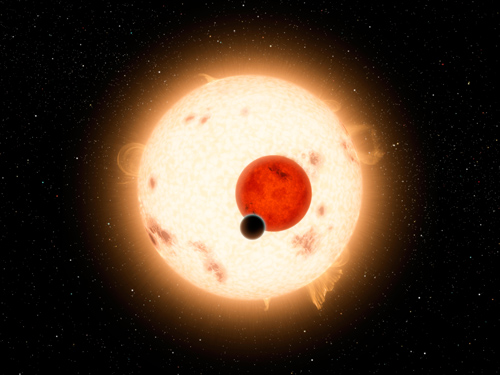 NASA's Kepler mission has discovered a world where two suns set over the horizon instead of just one. Image credit: NASA/JPL-Caltech

A research team led by Laurance Doyle of the SETI Institute in Mountain View, Calif., used data from the Kepler space telescope, which measures dips in the brightness of more than 150,000 stars, to search for transiting planets. Kepler is the first NASA mission capable of finding Earth-size planets in or near the “habitable zone,” the region in a planetary system where liquid water can exist on the surface of the orbiting planet. 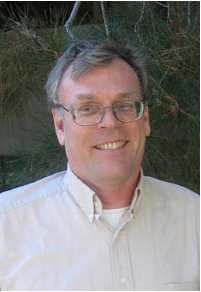 "We don't expect Luke Skywalker or anything else to be living on Kepler-16b, but if you could visit there, you'd see a sky with two suns, just like Luke did," said Nick Gautier, the Kepler project scientist at JPL, speaking at a news conference at Ames Research Center, Moffett Field, Calif. Image credit: NASA/ Jet Propulsion Laboratory

Astronomers further observed that the brightness of the system dipped even when the stars were not eclipsing one another, hinting at a third body. The additional dimming in brightness events, called the tertiary and quaternary eclipses, reappeared at irregular intervals of time, indicating the stars were in different positions in their orbit each time the third body passed. This showed the third body was circling, not just one, but both stars, in a wide circumbinary orbit.

The gravitational tug on the stars, measured by changes in their eclipse times, was a good indicator of the mass of the third body. Only a very slight gravitational pull was detected, one that only could be caused by a small mass. The findings are described in a new study published Friday, Sept. 16, in the journal Science.

This discovery confirms that Kepler-16b is an inhospitable, cold world about the size of Saturn and thought to be made up of about half rock and half gas. The parent stars are smaller than our sun. One is 69 percent the mass of the sun and the other only 20 percent. Kepler-16b orbits around both stars every 229 days, similar to Venus’ 225-day orbit, but lies outside the system’s habitable zone, where liquid water could exist on the surface, because the stars are cooler than our sun.

“Working in film, we often are tasked with creating something never before seen,” said visual effects supervisor John Knoll of Industrial Light & Magic, a division of Lucasfilm Ltd., in San Francisco. “However, more often than not, scientific discoveries prove to be more spectacular than anything we dare imagine. There is no doubt these discoveries influence and inspire storytellers. Their very existence serves as cause to dream bigger and open our minds to new possibilities beyond what we think we ‘know.'”

For more information about the Kepler mission and to view the digital press kit, visit:
https://www.nasa.gov/kepler